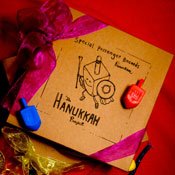 "We had a table at Fondren Unwrapped, and I was asking people, 'Do you have any Jewish friends? This would be a great gift for them!' And, most people answered, 'Amanda, you are my Jewish friend," Amanda Rainey recalled.

Rainey might be everybody's Jewish friend, but she is hoping to introduce Jacksonians to many more Jewish friends through a new holiday album, "Special Passenger Records Presents: The Hanukkah Project." This compilation album provides a quirky soundtrack to the Festival of Lights for those who celebrate every year, and it is a fun initiation for Gentiles like me who may not know as much about the holiday. The CD itself is gift-wrapped and includes Hanukkah presents like temporary tattoos, a dreidel and geltwhich is chocolate gold coins.

"The Hanukkah Project" began as an extension of another holiday project. Rainey performs with The Bachelorettes, who recorded "Be My Maccabee" for the "Merry Christmas Jackson" compilation album.

"We really like doing collaboration projects, so after we did the song for 'Merry Christmas Jackson,' I thought it would be fun to do a Hanukkah album," Rainey said.

The album strives to break through any preconceived notions of Hanukkah music with a surprising mix of electronica, dance, rock and folk, plus a healthy dose of humor. Rainey's adorable kid sisters' band Dubb Nubb kick off the album with "Hanukkah Harry," a funky love note to the Jewish version of Santa. Lizzie Wright Super Spaceship performs the beautifully composed "Dear Judah," which provides a bit of back story on Hanukkah.

"Special Passenger Records Presents: The Hanukkah Project" is available at Sneaky Beans, The Orange Peel and on www.etsy.com for $10.

For the goyim, "Merry Christmas Jackson: Volume 2," comes out Dec. 10. Emily Baker produced Volume 1 in 2008 with friend Steve Harvey, and she wasn't about to leave us hanging this time around.

"Steve had a lot of things going on this year, so I decided to take on the project myself," she said.

Baker rounded up friends like Passenger Jones' Taylor Hildebrand, Laurel Isbister, AJC and many others to create another solid album of local Christmas cheer.

The album kicks off with a festive, up-tempo tune by Baker and friends that demonstrates her musicianship and ability to channel a bit of Ani DiFranco. If you aren't in the mood for Christmas by the end of the song, press repeat.

There are only two covers on the disc, which is impressive considering the overwhelming number of holiday tunes that already exist. Jason Bruce performs a contemporary version of Charlie Brown lovers' favorite "Christmas Time is Here," while The Yule Dogs do a string-laden quick take on "God Rest Ye Merry Gentlemen."

The rest of the tunes are refreshing originals of all different genres: the rowdy twang of "All I Want" by The Hustlers, the touching duet "Through the Snow" by Lizzie Wright and Taylor Hildebrand, the warm-weather lament of Wooden Finger's "It Never Snows," and another fun electronic dance track by J-Tran, "Give It Away."

By the end of both these albums, it's clear that Jackson is full of talent. We are truly blessed to have so many different musicians of all genres, and so many talented people who have the know-how to record and produce this music for the masses. Baker sums it up best: "There is a lot of talent here, and much more that's still not represented. But also, I think we're the right size city to make projects like this work. It's small enough that we can know the people with the talent and resources, and it's big enough that those people actually live here."

Catch a preview of "Merry Christmas Jackson: Volume 2" at Sneaky Beans with Mississippi Happening on Thursday, Dec. 10, and then head to the release show at Eudora Welty Commons on Friday, Dec. 11, from 8 to 11 p.m. There is no cover, and the CD is only $5 at the release party.