[Pass The Mic] Auto-Tune: A Rant 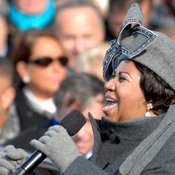 Aretha Franklin may not hit every note in perfect pitch every time, but no one could argue that she posseses stellar vocal talent.

There once was a local television commercial with cute children singing "This Little Light of Mine." One of the cutest things about children singing is the fact that they are children, and therefore they may not hit every single note spot-on. But this commercial was so far from cute I had to mute it every time it came on. These children sounded like robots, their little lights magically shining in perfect pitch. The culprit was a relatively new technology called Auto-Tune, which automatically tunes a pitch to make it perfect. Auto-Tune also automatically drives me over the edge just about any time I hear it.

Sasha Frere-Jones wrote in The New Yorker that oil-industry engineer Andy Hildebrand developed Auto-Tune. One obvious use of the program was on Cher's 1998 song, "Believe." Artists have used this effect more and more into the 21st century, changing the sound of pop music as we know it.

The problem with Auto-Tune is that it has become something that is abused, used as a safety net when perhaps the vocalist needs a little more practice. Listen to Aretha, Ella or even early Madonna. Those ladies did not have the luxury of Auto-Tune, and they did not necessarily hit every note in perfect pitch, but who would dare say that they weren't or aren't stellar vocalists? In fact, Madonna is not really that stellar of a vocalist, but she still sold millions of albums. Real talent does not need much in the way of technology. But even Madonna gave in to the temptation of Auto-Tune on her 2000 album, "Music"— a sign of things to come.

This age of "American Idol," where even runners-up get record deals, gives the impression that one does not have to work that hard to make it. "Idol" contestants and winners don't write their own songs or play their own instruments most of the time. Auto-Tune takes them to the next step of practically not having to sing their own songs, either. Many artists seem content to phone it in when it comes time to record vocals, because they know that the audio engineer can fix anything with Auto-Tune.

The popular TV series "Glee" has used Auto-Tune to noticeable excess. Never mind that lead actress Lea Michele has performed on Broadway since she was 8—her voice is Auto-Tuned along with the rest of the cast. One episode featured the kids spontaneously singing Nelly's "Ride Wit Me," sans Auto-Tune, and it fantastically removed all doubt that these kids are truly talented. Auto-Tune makes it difficult to sort out who has the talent and who doesn't.

The recent re-make of "We Are the World" brought together an interesting array of today's "top artists," and started right out of the gate with the Auto-Tuned vocal stylings of Justin Bieber, whoever he is. Later, the effect is used on nearly every artist with a solo, even Barbra Streisand. I could write an entire column on what is wrong with the new version of the song, but the most egregious offender was Auto-Tune.

Some artists won't use Auto-Tune; they are just as worried as I am about the increasing rash of performers who use it regularly. Death Cab for Cutie protested the overuse of Auto-Tune by wearing blue lapel ribbons at the Grammys in 2009. In a 2006 Pitchfork interview, Neko Case rips Shania Twain and Celine Dion, among others, for their overuse of the effect: "When I hear Auto-Tune on somebody's voice, I don't take them seriously," Case said.

Some of our local musicians are guilty of using Auto-Tune to excess. I am not going to call any names, but I will say I have heard both studio recordings and live performances from these artists, and I can safely attest that these people have beautiful voices that do not require "tweaking" with Auto-Tune. Maybe the vocal tracks will take longer to produce; maybe the singers will need to drink some hot tea and do some warm-up exercises before laying down the track—but it will be well worth it.

Technology is amazing. Where once the only way to record your original music was to spend thousands of dollars hiring professionals who only use the most expensive gear, now musicians can use inexpensive or free demos of software to record their songs in the comfort of their one-bedroom apartments. Auto-Tune is just another in a long line of nifty effects that definitely has its place in modern music recording. Like alcohol and bacon, it is fine to use in moderation, but I would like to see more emphasis on the natural talents that singers possess.

And yes, even the tiny little voices of children deserve to be heard in their natural, imperfect state.