Get Your Freak On | Jackson Free Press | Jackson, MS

Get Your Freak On 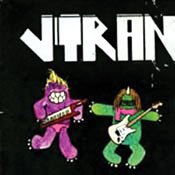 If you want an upbeat and danceable peek into Josh Hailey and Tre Pepper's mind, J-TRAN's self-titled debut album is your best bet. Released in early December, the pop/electro CD is a fun and raunchy compilation of songs the duo wrote and produced during late-night creative binges in Hailey's Fondren Corner studio over the course of 30 days.

Hailey and Pepper formed J-TRAN in 2009 with their first song and music video "Give it Away" (track 12), a pop/electro Christmas tune that combines underlying tracks from Wham's "Last Christmas" and a freestyle rap by Hailey. The band's previous members, Daniel Guaqueta and Amanda Rainey, both make an appearance on "Give It Away."

Listen to the first three songs on the CD, and you might question the parental advisory warning on the front of the case. The album opens with "J-TRAN" and proceeds with two uplifting and fun songs. "Jump & Play" features the sugary vocals of children who sing about the sense of wonder we lose as we grow up. It's one of those songs that you can't help tapping your feet to, and it perfectly captures Hailey's Peter Pan philosophy. The Hailey-penned "Love this City" is a nostalgic tribute to Jackson, focusing on his passion for the city, but noting its lack of momentum and change. As he packs up and heads for Los Angeles, perhaps it's a danceable eulogy.

The album begins its dissent into a kinky rabbit hole by the fifth track: "Freaky F*cked Up Girl." The song is about a guy who takes a girl home for a one-night stand, only to realize a little too late that she is a bit more than he bargained for in the bedroom. It's pretty naughty by conservative Mississippi standards but would make a great addition to a late-night dance-party mix.

The entire album is well mastered, but you might blush when you hear "Keep it In (From the Back)." Pepper, who has a background in mixing from Mediatech Institute in Austin, is no amateur when it comes to layering vocals and beats together. While the bonus track is reminiscent of a guys' locker-room conversation, the album never slows down or loses energy.

The CD jacket's art is impressive. The 30-page booklet features some of Hailey's best photographs with overlapping song lyrics. "Love this City" showcases thumbnail photos of Jackson landscapes and people, making the album feel like a scrapbook.

Overall, the album captures the free and funky creative energy that only Pepper and Hailey can pull off, leaving us with an additional dose of inspiration long after the prince of Fondren is gone.