[Pass The Mic] You Should Hear What I Hear | Jackson Free Press | Jackson, MS

[Pass The Mic] You Should Hear What I Hear 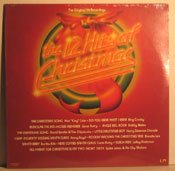 My great-grandmother rarely drove a car. On holidays, she would hop on the Greyhound bus in Memphis, and we would go and pick her up from the station in Jackson. Her name was Margaret Cornelia Mayyes Rod Stewart, my great-grandmother was the original "Maggie May," but we called her Nelia. One Christmas after we got home from the bus station, Nelia opened her suitcase and presented me with an album called "The 12 Hits of Christmas." It was my first Christmas record, and the best present she could have given me. I wore it out over the next several years.

I thank my great-grandmother for getting me started right with the holiday tunes. "12 Hits" includes some of the most well-known, classic songs of all time. From the first note of "The Christmas Song," by Nat King Cole, the album had my attention. It had the requisite children's tunesGene Autry's "Rudolph the Red-Nosed Reindeer" and David Seville's "The Chipmunk Songԗbut it also had grown-up songs like "Sleigh Ride" and Eartha Kitt's sultry "Santa Baby." And some songs were so cheesy, even to a 5-year-old, but I loved them anyway. One tune, in particular, was my absolute favorite: "All I Want For Christmas Is My Two Front Teeth," by Spike Jones and His City Slickers. Spike taught me that there's nothing wrong with putting a little humor into your holiday.

If I want to get in the Christmas spirit, all I have to do is put on this album (now a CD because the album itself is too scratchy to enjoy) and by the end, I am wrapped in a warm fuzzy blanket of holiday cheer. Few other Christmas albums have this same effect, but there are some worth mentioning.

Anything by Vince Guaraldi gets my stamp of approval, but "A Charlie Brown Christmas" is a soundtrack that sets itself apart from Guaraldi's other works. Of course, there is sentimentality to the music; who doesn't conjure up images of Linus telling The Christmas Story or Charlie Brown picking out that pitiful tree? But cartoons aside, Guaraldi knew how to paint cozy pictures with his melodic, shuffling piano themes.

Ella Fitzgerald's version of "Let it Snow" goes perfectly with peppermint hot chocolate and sugar cookies left out for Santa, while Louis Armstrong's "Christmas in New Orleans" complements a big bowl of turtle soup for Christmas brunch. You really can't go wrong with any of the jazz renditions of the old Christmas standards.

For a more modern twist, another favorite is Harry Connick Jr. His "Ave Maria" is the only version I ever really want to hear. I saw Connick in concert several Decembers ago, and he definitely put me in the mood. For Christmas, that is.

Obviously, I am a big fan of traditional, classic holiday music, but there is still room on my plate for more contemporary style. I can't resist Cheech and Chong's "Santa Claus and His Old Lady," a twisted story about the man in the red suit. And nothing describes a typical southern family get-together more accurately than Robert Earl Keen's "Merry Christmas From the Family." One of my favorite lines is: "Fred and Rita drove from Harlingen/ Can't remember how I'm kin to them." Have you ever had an "aunt" who wasn't really related to you at all? Me, too.

One contemporary holiday music trend that I just can't get into is the Trans-Siberian Orchestra/Mannheim Steamroller thing. I know those are two separate groups, but the sound is the same: disaster and despair. Who knew Christmas could sound so miserable? Beyond that, who knew that changing the key of every upbeat holiday tune from major to minor could translate into a lucrative world-touring act?

Give me Charlie Brown and the Chipmunks. I need Elvis' "Here Comes Santa Claus" and The Drifters' "White Christmas" to transport me to my happy place. Andy Williams told us that Christmas is supposed to be "The Most Wonderful Time of the Year." Granted, that song is pretty cheesy, but at least it is upbeat! The holidays are a wonderful time, and holiday music should be a reflection of that, a catalyst to evoke all the good memories of Christmas past.