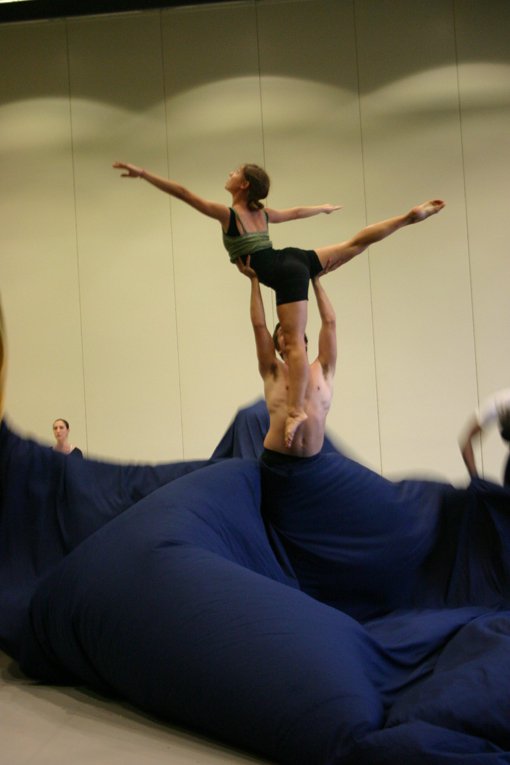 Kenaniah Bystrom, who dances the part of the storm, elevates dancer Scarlett Wynne into the air during a rehearsal of "House of Broken Dreams." Photo by Maggie Burks

TALK Dance Co. Executive Director Stephen Wynne had been searching for a story upon which to build movement and dialogue since he decided to reinvigorate the dance company in Mississippi last year. He found that story last spring in a mixed-media painting by H.C. Porter, "House of Broken Dreams," which depicts a broken family in the wake of Hurricane Katrina. Two children gaze from the canvas, their eyes filled with pain but subtly gleaming with hope.

"There's this dichotomy in the painting because the painting has this destruction, and then there's the hope of the two kids in front of the painting," Wynne says. "So there's these two things going on that are the theme of how I wanted to build (the choreography)."

TALK Dance Co. performed "House of Broken Dreams" Aug. 23 at the Mississippi Museum of Art. The piece is divided into six sections. Wynne choreographed each one to modern instrumental songs, most of which feature the piano.

The first scene opens with four dancers, seemingly portraying children, playing jump rope, telling each other secrets and basking in the gleeful, worry-free life of children. Their father, portrayed by DeMarcus Suggs, soon joins in the fun, as his wife dejectedly walks across the stage in the foreground. The wife, dancer Betsy McMillan, is somehow disconnected from the other dancers, but the viewer cannot conclude why until near the end. Wynne incorporates small, detailed movement into the children's choreography, especially hand gestures. From displaying open palms to walking their fingers across the crowns of their heads, the movement is playful yet very technical.

As the piece progresses, the viewer sees the storm arrive in the lives of this family. Swathed in a large blue and yellow fabric, dancer Kenaniah Bystrom, slowly spins around the stage. The third section, "The Storm," climaxes as the hurricane battles each member of the familyexcept the mother, who looks on devastatedand eventually takes the father's life. Suggs' lifeless body lays in the blue water for the rest of the piece.

The rest of the piece portrays the family's mourning and recovery, both emotionally and physically. In "VengeanceMourning," McMillan battles the storm as she mourns her husband. Through her rigid, quick movement and pained expression, she is convincing as she runs the gamut of emotions that a person feels after a major tragedy. First, she is devastated, then livid anger pushes her to try to defeat the storm. It's only until she abandons her anger and lets herself begin to mournsoftening her movements, shifting to fluid extensions and delicate arm gesturesdoes the storm begin to quiet.

The last section of the piece is set to a juke-joint bluesy piece, "Peg O' My Heart," which parallels the mixed emotion of the children and their mother as they begin to pick up the pieces and try to move forward. The piece comes full circle as the children begin to play again, smile again and regain their innocence. There is nothing normal about the ending. The show closes with an uncertain but hopeful tone.

The strongest attribute to Wynne's choreography is his attention to detail, especially subtle reoccurring movement that carry emotional significance. They not only tie the beginning and closing sections together, but they also mirror a struggle to return to the way things were before the storm.

The dining room table and its six chairs are the only props, besides the storm fabric, that the dancers interact with. The first section shows the family sit down to eat dinner together, the children switching seats playfully. The last section returns to this central archetypethe family table, where conversations, arguments, relationships, decisions happen; a symbol of family itselfbut they are missing the father.

"House of Broken Dreams" tells the story of destruction, yes, but it also reveals that there is hope, a characteristic that we as humans need to move forward in life. The piece leaves viewers with many questions to ponderabout symbols, themes, reoccurring movements, allusions. And that's what makes the choreography so poignant. It's not only to entertain, but also to create dialogue.

The major drawback to the performance, however, was the incongruous nature of the venue to the piece. While the Mississippi Museum of Art was a spacious stage, the small amount of audience space was limiting. Also, neither the stage area nor the seating area was elevated, such that anyone sitting past the third row couldn't see past the rows and rows of peoples' heads to view the stage.

Once TALK Dance Co. can show in larger, more accessible arenas, they can begin to foster more and more dialogue. In American society, which focuses so heavily on the individual, it is sometimes difficult to interact in a sincere, honest way with people you've never metabout issues that mark human struggle. This dance company attempts to offer a solution to that dilemma by telling stories.

Let's hope they don't run out stories to tell.