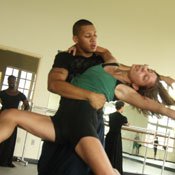 As the classical orchestral music builds into a crescendo, four dancers stagger around the stage in stifled movements. They slowly climb into a human edificeone man on another's shoulders and others standing propping themselves up in various waysas they grotesquely and collectively die. This is the fate of the Capulet and Montague families in Stephen Wynne's interpretation of William Shakespeare's "Romeo and Juliet."

I recently sat in on a rehearsal for TALK Dance Co.'s performance of "Shed," a three-piece dance presentation that includes Wynne's piece, which shares its title with the overall performance evening, and a narrative piece titled "Uncentered Hearts," which explores the confines of an abusive relationship.

The relatively young modern dance company, which Belhaven College dance professor Stephen Wynne started in Philadelphia in 1996 under the name At Marah Dance Theatre, changed its name and reincarnated in Mississippi in 2007. The pieces in "Shed" are physically powerful and filled with lush visual motifs. For instance, the choreography in Wynne's "Romeo and Juliet" piece utilizes turning movements and straight movements to represent two different groups of people. The wardrobes in the dance further divide the characters. Romeo and the Montague clan wear skirts (Romeo's is 40 feet), while the Capulet family dons pants.

The Jackson Free Press talked to Wynne about the themes addressed in "Shed" and their relevance to Mississippi audiences.

Your goal for TALK Dance has always been to tell stories. Where did this one come from?
I have a neighbor, and she was abused as a child. And she (also) comes from a blended, black and white family. And so I want to do a bigger piece about her, you know more of a biography-type thing. But I was just using this just to look into (these) ideas and see where we could go with it. It's not biographical of her, but it sort of inspired me to use that as material for a piece.

The other thing is I feel like I've been seeing more racially mixed marriages here (in Jackson), which I'm really happy aboutIndian-Caucasian, black-Caucasian, Hispanic-Caucasian and even black-Hispanic. I know people who are of mixed marriages and how they deal with issues with their families. It seems like the community is a lot more embracing than a lot of these people's families. That gave me the idea to do a "Romeo and Juliet"-type thing.  It's not so much that I wanted to play the race card, but I just know people who are coming from racially mixed marriages, and it's not the community that they're dealing with anymore, it's their families. So that's the inspiration. I want to put that out there.

Love wins out in this piece. Why?
Because I feel like in "Romeo and Juliet," love is the victim. And I want for love to be victorious in this piece. Because I feel like that's the direction that we go. That's the direction that I want for our culture to go. That's the direction I want for we, as families, to embrace.  Love has a hard enough ticket nowadays, anyway. There's so much stresswith people working and money issues. If people are truly in love with one another, then they should have a chance to be embraced by their families, regardless of what taboos they feel they might be breaking. So I want to make the statement that love is important, and that love should be victorious, and that fear and hate need to die.

In Shakespeare's (version), love is a victim at that point. On the other side, the families do get to see the result of their hate by losing the people that they love. But then they still live; they still get to enjoy their lives; they get to see the things that love should be able to see. So it's very simple; I just switched it around (for my piece). I want the people who fear and the people who hate to be the losers in this piece, to be those who die.

How does the theme of control factor into the piece?
I think people try to control others by using fear tactics, by using hate, so that they can remain in control of their families and of their culture.... People who do that are living in a very insecure place, and I want them to see the contriving nature of the individual. I want for those people who fit that pattern to be able to recognize themselves, and really be able to see that there's really no reason to be that way. There's room for everyone. Everyone should be able to find a place to be embraced without the control factor.

How does that translate in the piece "Uncentered Hearts"?
[Y]ou're going to see the idea of that control being very strongly presented, on a one-on-one basis. People are going to find that very uncomfortable. And sometimes through looking at that from the third person, I hope to be able to bring that to a more real place, especially for those people who may do it (abuse) in a different way. It may not be a physical way; it may be more though manipulation, or through fear tactics. (But I want) for that person to be able to recognize themselves and to be able to see that pain they're bringing onto others.

Why did you choose the title "Shed"?
To sort of "shed" the confines of this control. So basically, I'm looking to lift up personhood and freedom, that we can come out of the confines of this control and fear, to be able to embrace one another. So what I'm saying is to "shed" this abuse, shed this fear. If it's the person who's being abused, (the message is) that they are able to shed that and come out and away from that abuse. Or if it's the other way around, that the people who are abusing are able to recognize that and shed those habits and those mechanisms in their lives that cause them to do that.

I feel through the personal contact and the imagery and the sort of down-home examples of what I'm doing, that people in the audience are going to be able to recognize themselves and to really put themselves on trial, and to say, "Where do I stand in all this? What great waysor insignificant waysam I holding people because of fear?"

So let's start with each one, let's start on a personal basis. We all have to start in our own hearts and ask ourselves the question.