A New Twist on an Old Classic 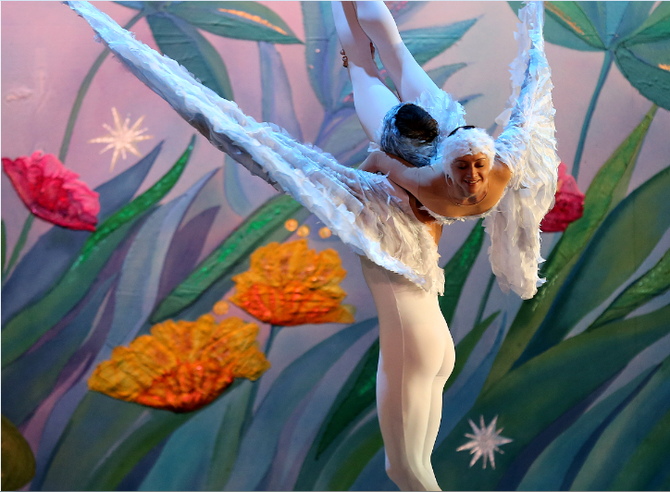 Sergey Chumakov and Elena Petrachenko are soft and graceful together as the Dove of Peace in Moscow Ballet’s rendition of “The Nutcracker.” Photo by Courtesy Moscow Ballet

For some families in Jackson and around the world, there are five seasons in the year, the fifth being The Nutcracker Season. After moving to Jackson in 2005, my immediate family and I made it somewhat of a tradition to attend a performance of "The Nutcracker" each year, and I eventually had the opportunity to perform in several productions. Perhaps because of all the preparation leading up to the event, I came to know The Nutcracker Season well.

For dancers in Jackson at local companies and schools such as Mississippi Metropolitan Ballet and Ballet Mississippi, The Nutcracker Season starts in the fall and continues until the last performance in December.

This year, however, Jackson was home to a third performance of the ballet that originated during the late 1800s. During the week of Thanksgiving, the Moscow Ballet presented one night of "The Great Russian Nutcracker" as part of the largest Russian ballet tour in America; it includes 73 cities this year.

Ballet Mississippi and Mississippi Metropolitan Ballet lean toward the traditional story of "The Nutcracker," but the Moscow Ballet's "The Great Russian Nutcracker" takes cues from happenings in recent decades.

The traditional nutcracker story is about a young girl named Clara who receives a nutcracker doll at a Christmas Eve party. At midnight, Clara rises from her slumber and finds herself surrounded by human-sized mice underneath the larger-than-life tree that continues to grow. The nutcracker then comes to life and leads an army against the rat king and his mice. After winning the fight, the nutcracker transforms into a prince and leads Clara to the Land of the Sweets, or the Land of the Sugarplum Fairy, where the Sugarplum Fairy rewards them with a parade of sweets from around the globe. After each country performs, the Sugarplum Fairy and her Cavalier dance for the couple.

"The Great Russian Nutcracker" sticks to this general outline with a few changes. Clara is instead named Masha. Instead of arriving in the Land of Sweets in Act II, Masha and the nutcracker prince visit the Land of Peace and Harmony where emissaries from around the world dance for them.

Sergey Chumakov and Elena Petrachenko play the Dove of Peace, which replaces the Sugarplum Fairy in "The Great Russian Nutcracker." The two open the second act softly and gracefully—a perfect introduction to the Land of Peace and Harmony.

The curtains rise to reveal the duo entwined in a variation of a fish dive in which Chumakov holds Petrachenko above him with one arm as she seems to dive downward. This and several other one-armed lifts in their dance accentuate their new costumes that, together, create a 20-foot wingspan.

Each variation of Act II has its highlights, and a few stood out. While the choreography in the Spanish variation was not terribly complex, the dancers executed the moves well. The female lead probably had the most beautiful attitude en l'air in the production. The traditional and entertaining Chinese variation preceded the Russian duo that was, as expected, full of energy. The female lead, Anna Radik, easily had the highest arabesque, and Vitaliy Shvets awed the audience with a series of grand jetes en tournant around the stage, throwing his hat to the ground in accomplishment at the end.

It's easy to say that the Arabian variation was probably the most impressive divertissement, or short ballet interlude, of the second act. In fact, the two dancers earned seven ovations during the four-minute divertissement. Chumakov and Petrachenko took the stage together again for it and showed off more lifts, this time held for longer timeframes.

While some have criticized the choreography here as being too contortionistic or acrobatic, each move is executed with an elegance that makes it clear that they specialize in ballet, and the serene mood of the piece keeps it from feeling like a circus act.

In addition, Chumakov and Petrachenko give the piece the sensuality that it deserves, transporting the viewer to a mystical place.

In their final, Masha and the Nutcracker Prince dance the final grand pas de deux in "The Great Russian Nutcracker" instead of the Sugarplum Fairy and her Cavalier. In each section, the dancers, Olga Kifyak and Viktor Shcherbakov, remain poised and light on their feet. Instead of stealing the spotlight with overly performed advanced leaps, the choreography for Viktor Scherbakov only goes so far as to include several tours en l'air, or jump spins straight up with straight legs.

Although the Moscow Ballet strays from the story most people grew up with, the performance doesn't lack its Christmas charm. The 40-dancer production (miniscule compared to local companies using around 100 dancers) is part of the Moscow Ballet's 20th year anniversary tour.