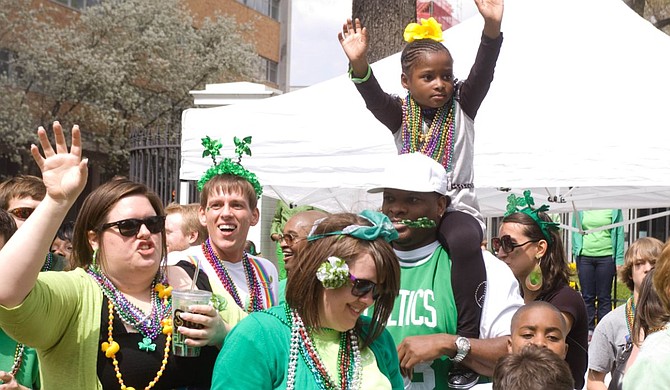 After two years’ wait, Hal’s St. Paddy’s Parade and Festival returns to downtown Jackson. This year’s slogan, “Go Big and Come Home,” represents both the Jackson metro community getting to come together again, as well as Jackson’s celebration of its bicentennial, organizer Malcolm White says. Alexander “Trace” Armstrong III will serve as the event’s grand marshall, as he was originally slated to do in 2020 before the pandemic postponed the otherwise annual festivities.

Floats will begin lining up promptly at 7 p.m. at the corner of State and Court streets. The children’s festival will begin at 9 p.m. in front of Thalia Maara Hall on Pascagoula Street, with the Marl Pet Parade beginning at the corner of West and Pascagoula streets at 10 a.m. The children’s parade begins at 11 a.m. at the same location. The primary parade will kick off at 1 p.m., which can be viewed throughout downtown Jackson.

Hal & Mal’s (200 Commerce St.) will host the event’s official afterparty following the parade’s end. Tickets are $20 in advance for the afterparty and $25 at the door. Gates open at 2:30 p.m. The afterparty will feature live music from Mustache the Band, The Molly Ringwalds, Frazierband and the Southern Komfort Brass Band, as well as tunes from DJ Cadillac, DJ Uri and DJ Tam. Visitors must be 21 or older to attend.

From March 25 to March 27, the Mississippi Trade Mart (1200 Mississippi St.) will house the Spring Market of Jackson, an event where more than 125 merchants showcasing a variety of items sell their wares at this one-stop shop. Attendees can browse gourmet foods, unique gifts, trendy fashions, home décor and more. Tickets range from $10 to $20 and include one-day passes, three-day passes, cupcakes and cocktails passes, or muffins and mimosas passes. All can be purchased in advance online.

JXN Flea is a monthly flea market that the Flamingo and locals at Ecoshed (133 Commerce Park Drive) host so that shoppers can support small businesses from the area. Entry is free, and the space is pet-friendly. Attendees can browse the offerings within the eco-friendly and self-sufficient architecture the Ecoshed offers as vendors sell goods.

To celebrate The Rooftop Bar’s reopening, Old Capitol Inn (226 N. State St.) will be holding musical performances this weekend. During the inn’s extended St. Paddy’s Day hours, Charade performs on Friday, March 25, from 5 p.m. to 10 p.m., and Brian Ballou will be performing on Saturday, March 26, from 7 p.m. to 10 p.m.. The bar opens at 3 p.m. and serves food and drinks available for purchase. The location allows guests to listen to the eclectic mix of acoustic tunes while overlooking the downtown Jackson area.

For more information on local events throughout the week and beyond, visit jfpevents.com.