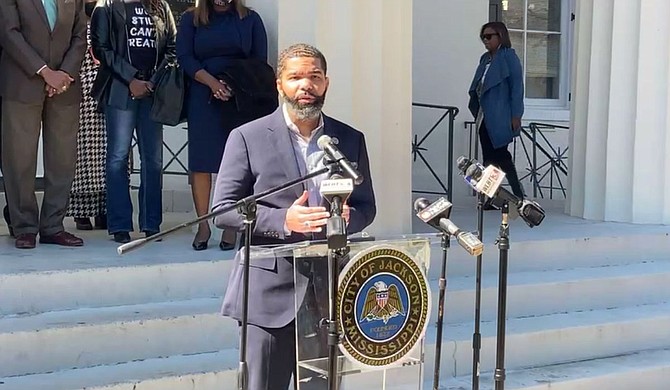 Mayor Chokwe A. Lumumba expressed his belief that certain Jackson City Council members may be receiving bribes in exchange for steering a garbage-collection contract. The allegations come as Waste Management sues Jackson over allegations of improper consideration in the bidding process. Photo courtesy City of Jackson.

Amid an ongoing dispute between Mayor Chokwe A. Lumumba and the Jackson City Council over garbage-disposal contracts, the mayor said that he believes certain members of the council have accepted bribes.

“I'm going to put it plainly and clearly so nobody misunderstands what I mean when I say in this process that our council has been compromised and they are in cozy relationships,” Lumumba said during yesterday’s press briefing.

“What I am saying, plainly and simply, is that I believe certain members of our council have accepted bribes and are steering a contract,” he asserted. “That is what I believe and I want to put that clearly.”

Lumumba quoted his intended awardee for the upcoming garbage-disposal contract, Richard’s Disposal, as being $12 million dollars cheaper than the incumbent Waste Management.

“You have them pushing against a contract which is $12 million cheaper. Who's going to pay the difference?” the mayor posited. “The residents of Jackson.”

Both councilmembers have denied the allegations.

“If those claims are made then they need to be followed up with evidence,” Foote said in response.

Stokes in return filed a request with U.S. Attorney Darren J. LaMarca to investigate the claims and to “conduct a complete and thorough investigation of the intentionally false and malicious allegations.”

When asked what evidence Lumumba had for allegations of bribery, the mayor declined to provide anything but his belief.

“I will leave it at my statements,” Lumumba said. “What I said is what I believe. I know how to walk the tightrope of what I say, having been professionally trained in that area.”

Jackson now faces a lawsuit brought by Waste Management, which alleges that the mayor did not enter into good-faith negotiations with the company before choosing Richard’s Disposal for a one-year emergency contract. That contract is set to begin April 1, though Waste Management has offered to continue service at their current rate through April 30.

“This offer will give the City and Waste Management an opportunity to resume contract negotiations and hopefully enter into a new agreement,” the suit reads.

The suit also alleges that Lumumba concocted a fake emergency so that he could subvert the city council, and requests that the council be declared executive authority for contracts instead of the mayor.

“Instead Waste Management understands the Mayor has declared another state of emergency to circumvent the RFP process and award to his vendor of choice, Richard’s Disposal,” reads the lawsuit. “There is no emergency. Waste Management currently is collecting waste pursuant to its contract with the City. Further, the Mayor cannot create an emergency in an attempt to end run the process.”

During a Feb. 24 meeting, Ward 6 Councilman Aaron Banks decried the mayor’s use of an emergency order as a precedent for subverting the council.

“I will say institutionally what concerns me is there being a precedent set where the council, our legislative authority’s vote can be bypassed at any time through just declaring an emergency,” Banks said.

Banks also expressed his concern that if Jackson is indeed under an emergency, that Richard’s Disposal would not be best equipped to quickly alleviate the problem.

“If there's an emergency that has arisen, then now I think the choice has to be who's better positioned here in the City of Jackson to continue collections while we work out whatever we need to work out together over the course of the next year,” Banks said.

When asked for further details on Waste Management’s lawsuit, Lumumba ended his statements confident in the City’s case.

“I like our chances. Once again, we're 1 and 0 against a multinational corporation,” Lumumba said. “We know what we're doing, and we feel good.”