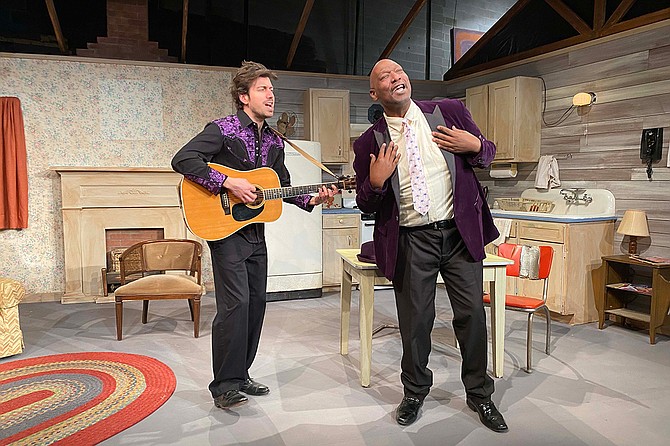 Austin Hohnke and Mark G. Henderson star in New Stage Theatre’s production of “I Just Stopped by to See the Man” as English rocker Karl and blues musician Jesse “The Man” Davidson, respectively. It runs Feb. 2-13, 2022. Photo by Kyle Tillman

An upcoming main-stage play at New Stage Theatre hits all the blues-music bullet points—the magical spell of its sound, its Mississippi Delta and field-worker roots, its musical flip side in spiritual communities, the crossroads myth, its “devil’s music” moniker and how British rockers rode its inspiration to riches.

British playwright Stephen Jeffreys completed “I Just Stopped By to See the Man” in 2000, and the play focuses on the humanity of those in its orbit. Salvation and sacrifice, redemption, reconciliation and temptation are threads in this character study of three people who must come to terms with their choices, their fears and the truth in their souls.

The play opens Feb. 2 and runs through Feb. 13. Set in the 1970s Mississippi Delta, Jesse “The Man” Davidson, last of the Delta bluesmen, lives in a shotgun house on a rural crossroads. Legends credit a devil’s deal behind his skill; the musician himself is reported to have died 14 years prior to the play’s start.

Even Jesse’s life in obscurity, with its outlook for trouble from any direction, cannot keep a determined interloper from stopping by to see him. Karl, a British rock star with a band on tour in the region, is determined to seek out the authentic source of the music he plays for a living, as if to sanctify his soul and secure his future. Jesse’s daughter, Della, stands with these two men at a crossroads, weighing what their choices—and sharing the truth about her own—will cost her.

In Jesse, Mark G. Henderson finds a fascinating personality: famous, talented and accustomed to the limelight, but now isolated from the recognition he once knew. “Oftentimes when I think of Jesse, I think of the concept of an Achilles heel,” Henderson, longtime speech/communications and theater professor at Jackson State University, says.

“With all great men, there’s something about them that’s their weakness, that could destroy them,” Henderson adds. “I’m still looking at Jesse. Is it his love for the blues? He loves the blues so much that he doesn’t want anyone else to play around with it. He feels like you have to have a right to sing the blues.”

DeShawn White of New York City, a Maryland native making her New Stage debut, has the nuanced role of Della, an activist and truth-teller. “She tells it like it is,” White says, “but at the same time, she’s hiding and she’s not living her own truth. The tug of war that’s going on within her, I think, is really compelling.”

As the larger-than-life English rock star in love with the blues, Austin Hohnke, also of New York, is struck by all the things Karl fears. “He’s scared of being alone, despite performing to these huge audiences. He seeks recognition, and needs to feel that there’s some legitimacy to what he’s doing,” Hohnke says. “It’s that fear of being a fraud.”

Hohnke was last seen at New Stage playing Carl Perkins in “Million Dollar Quartet,” an experience that gave him a great foundation and springboard for this production, he says.

“We went to Sun (Studio), and we went to Graceland, so we saw the adoption (of blues) in early rock ’n’ roll. … There are a lot of parallels I could draw,” he says. “As far as digging into legitimate blues, this has been just a great opportunity to dive headfirst into it.”

Not many plays focus on the blues, without being musicals, notes Francine Thomas Reynolds, New Stage Theatre artistic director who also sits in the director’s chair for this production. The play’s plunge into the culture, language and impact of the blues, and the three strong characters that drive its story drew Reynolds to this rich drama.

“They’re not stereotypes at all,” she says. “These are deep, multifaceted characters.”

“Everybody has a secret, and you find out what those secrets are. They’re revealed throughout the play, and how those secrets are driving them,” Reynolds says. “But on top of it all is layered this exploration of the blues. Who has the right to sing the blues? What is the blues?”

“I Just Stopped By to See the Man” folds into the theater’s Mississippi play initiative with its setting, recognition of music’s roots and the way Mississippi informs the Jesse character.

“There’s universality in their desires—keeping secrets, desiring relevance and legitimacy,” Reynolds says. “They could be anywhere, really, but it adds so much life to it, that it’s a Delta blues player.”

The stage play does include some music—guitar playing and singing—“but the whole idea is to get someone to sing and play the blues,” Reynolds emphasizes.

Mentions of real blues artists, messages coded in song, the strength and pull of the Black church, political context of race relations and more give the play an air of authenticity.

“Jesse’s character is kind of a meshing of all of these blues singers who are from MIssissippi or who are from the South,” Henderson says, and the playwright gets that right. “I think he speaks their thought process pretty well—how they felt or how they thought, being a blues singer in America against the backdrop of white supremacy.”

“Sometimes we see people who are famous or who are in the limelight, and you see their glory, and you don’t realize they still have a story,” Henderson adds. “There are some things that they’ve dealt with, that probably were the impetus for much of their success, because they were able to, as in Jesse’s character, overcome the status quo to leave the cotton fields, to make some leaps. And, he was able to use those experiences in his music.”

“I Just Stopped By to See the Man” runs from Feb. 2 to Feb. 13 at New Stage Theatre (1100 Carlisle St.) in Jackson. Showtimes are 7:30 p.m. Tuesdays through Saturdays and 2 p.m. on Sundays. General admission is $30, with discounts available for students, senior citizens, military and groups. Attendees may buy tickets at the theater box office, by phone at 601-948-3531 or online at newstagetheatre.com.

Fully vaccinated audience performances are Feb. 2, Feb. 4, Feb. 6, Feb. 8, Feb. 10 and Feb. 12, with proof of vaccination required, including for all children. A socially distanced performance will be on Feb. 9. A pay-what-you-can performance will be on Feb. 3. Artworks from H.C. Porter’s “Blues @ Home: Mississippi’s Living Blues Legends” series will be on exhibit in the Hewes Room at the theater throughout the show’s run, and Porter will be on hand to share insights on the project at 6:45 p.m. on Feb. 10, prior to that evening’s performance.