Being the 'Best of Enemies' | Jackson Free Press | Jackson, MS

Being the 'Best of Enemies' 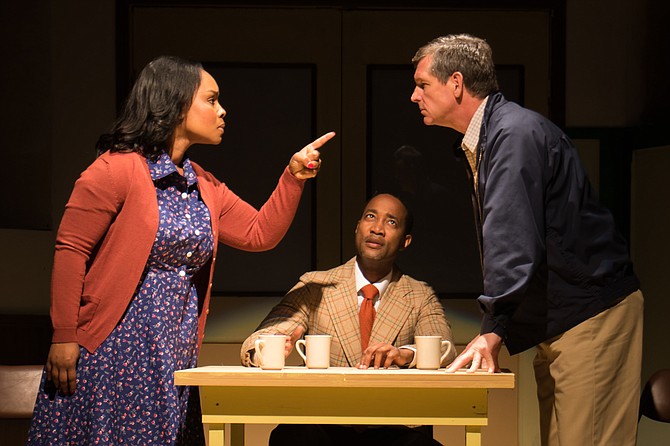 JACKSON — New Stage Theatre Artistic Director Francine Thomas Reynolds says that before some people went to see the theater’s production of Civil Rights Movement-era drama “Best of Enemies,” they told her that they were hesitant, given the subject.

The play, which is based on Osha Gray Davidson’s novel “Best of Enemies: Race and Redemption in the New South” (University of North Carolina Press, 2007, $26.36) and takes place in Durham, N.C., tells the story of the relationship between civil-rights activist Ann Atwater (who Marci J. Duncan plays in New Stage’s production) and Ku Klux Klan Grand Cyclops C.P. Ellis (Rus Blackwell). Community organizer Bill Riddick (Yohance Myles) brings the two together to co-chair a charrette, a meeting in which parties involved in a project meet in order to solve conflicts, on desegregating schools in Durham. The play also stars Jessica Wilkinson as C.P. Ellis’ wife, Mary Ellis.

“It’s two people who are polar opposites on opposite sides of an issue,” Reynolds says of the play’s plot. “You see their struggle with each other, and you also learn a bit about their lives and what motivates them and their stances, and then how they come to a conclusion because of the charrette.”

Reynolds says it’s a tough subject matter because of the language and the way they talk to each other at the beginning, and it deals with negative elements of American history, such as segregation and the KKK.

“(But) it’s also an inspiring story and uplifting in some ways,” she says.

She says the scenes moves quickly through the charrette, and while the play does have some humor, it is emotional. Doing plays like this, she says, always carries some element of risk, but she believes it’s necessary for regional theaters such as New Stage to also present works that deal with heavier themes.

“You worry sometimes about doing a play with this subject matter,” she says. “It’s not … a toe-tapping musical. You don’t leave humming tunes, and it’s not a popular story like ‘Steel Magnolias.’ … It’s heavy subject matter even though there are moments of levity in the show.”

Reynolds says that when she chose the play in January 2016, she didn’t realize at that time just how relevant it would become, but she realized that after events such as last summer’s shooting in a Charleston, S.C., church and from the environment surrounding the presidential election. She says that some people who saw the play have told her that we need to revisit the Civil Rights Movement and remember what happened.

“(When I picked it), I thought it was more of a history play,” she says. “That’s how I was thinking of it, like a ‘contemporary history as drama’ type thing, but it seems to be more present, As we were preparing to do it, and as we rehearsed it, and I auditioned (people) for it, I thought, ‘This is a lot more present than I thought.’ … Right now, we’re in a time in our history where we’re so polarized as groups of people. We need to remember that people can come together and find common ground.”

Tonight, March 8, at 7:30 p.m. is Jackson State University Night at New Stage Theatre (1100 Carlisle St., 601-948-3533). Students from JSU and other colleges and universities can see “Best of Enemies” for $10 with student ID. At 6:30 p.m., JSU Margaret Walker Center Director Robert Luckett will lead a discussion about the history of desegregation in Jackson. After the play, Yohance Myles, activist Doris Derby and Sen. John Horhn will engage in a panel discussion. The discussion before and panel after are free to the public.

”Best of Enemies” continues at New Stage March 9-11 at 7:30 p.m. and March 12 at 2 p.m. Regular admission to the play is $28 and $22 for seniors and military. For more information, visit newstagetheatre.com.