Metaphor in the Mississippi River 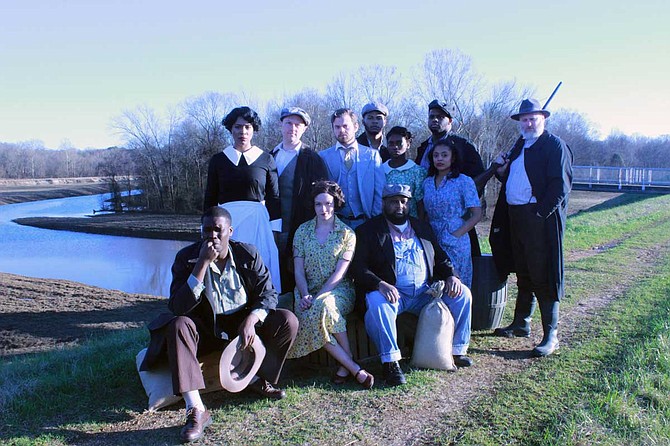 In summer 1926, the rains began in the central basin of the Mississippi River. The river swelled to higher levels than ever before until April 16, 1927, when the levee broke along the Illinois shoreline. A few days later on April 21, the one at Mounds Landing, Miss., broke.

To this day, the Great Flood of 1927 remains one of the largest natural disasters in the U.S. It flooded more than 23,000 square miles of land, with some residential areas submerged in 30 feet of water. Flood waters inundated 41,673 homes;, destroyed 21,836 buildings and damaged 62,089 more;, caused the loss of thousands of cattle, work and farm animals;, and hindered an entire year of crop production.

It also displaced thousands of African Americans, many of whom were forced to stay and rebuild the levee, and aid in recovery efforts. The event contributed to the Great Migration, when 6 million southern African Americans migrated north between 1916 and 1970.

The flood affected many cities in Mississippi, including Greenville, the setting of New Stage Theatre's production of Marcus Gardley's "Hell in High Water." The play tells the story of how the event affects the city's people, specifically the African American population that lived in the refugee camps along the levee, and how the flood affected the Great Migration in the 1920s.

"The dark side of all this is Greenville, was, in a study, one of the worst places of the refugee camps," says New Stage Artistic Director Francine Reynolds, who is at the helm of this play. "And they were refugee camps on the levee for all the African American citizens."

After Reynolds heard about Gardley's play, originally titled "On the Levee," in 2011, she began the process of tracking the script down. She finally got it in 2017. After first reading it, she began searching for the right season to put the production in.

In 2017, it was part of New Stage's Mississippi Play Series, and Reynolds says that they received a positive response. Also, she saw it as a possible teaching opportunity.

"What I found out was a lot of people didn't know about the 1927 flood, and how it affected much of the state and all of the Mississippi River Delta area, and Greenville a lot," she says.

New Stage received a $15,000 grant in 2018 from the National Endowment for the Arts to perform the play, and then Reynolds contacted blues artist Vasti Jackson about composing music for the production and also about playing the role of the blues musician in the play.

While the play focuses on the history portion, "Hell in High Water" is about more than that, both in terms of subject matter and atmosphere, Reynolds says.

"The play is very poetic in the way the writer puts the words together on the page, and it's epic, so it's woven with music throughout," she says.

The play centers around white landowners LeRoy and William Percy, as well as Joe Goodin and his son, James, among the African Americans stranded on the levee. It also has element of romance.

"It touches on all these things that were part of the history, but it's also really about these relationships," Reynolds says. "You'll learn little snippets about the flood and stuff like that, and what happened after."

Since New Stage cannot have actual water on the stage, she says the cast and crew decided to stick with Gardley's poetic style. A structure with platforms will be on the stage for the play's different settings, much of which will be the levee.

"The levee and the water are the metaphors for everything," she says. "To me, in life, and in the play, the river reveals the true character of people. It really does. All these different characters have different reactions to the flood."

For the water, the theater will accomplish that through light and sound, and other effects, and in New Stage's version, Reynolds says the cast will essentially personify the flood through sound and movement.

"What I think the playwright is showing us is struggle, despair and hope out of this disaster," Reynolds says, "and how people respond to disaster, and the fabric of the whole state history, and the history of America; this Great Migration, going to Chicago, going to St. Louis and Memphis, and what that was; and how ... like in (the) 1927 Mississippi Delta, how music was used to tell the story also."

New Stage Theatre (1100 Carlisle St.) will perform "Hell in High Water" Jan. 29-Feb. 10. On Jan. 31, Robert Luckett, the director of Jackson State University's Margaret Walker Center; Rolando Herts, the director of Delta State University's Delta Center of Culture and Learning; and Vasti Jackson will participate in a dialogue about the 1927 flood. During Youth Night on Tuesday, Feb. 5, tickets will be $10 for those ages 18 and under. During the play's run, New Stage will also exhibit photos from the Mississippi Department of Archives and History's 1927 Flood Collection in the Hewes Room.

Tickets for "Hell in High Water" are $30 for general admission, and $25 for students and seniors. For more information, visit newstagetheatre.com.