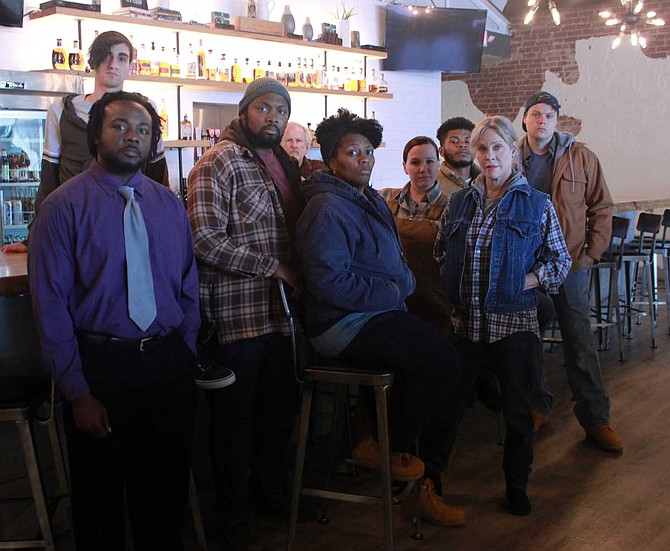 A lot can change in eight years. For example, in 2000, the manufacturing industry experienced a sharp drop of employment due to layoffs, factories moving overseas, manufacturing automation and more. Data from the Economic Policy Institute shows that from 2000 to 2014, the country lost 5 million manufacturing jobs. Then, in 2008, the recession started.

Those two time periods provide the setting for Lynn Nottage's play "Sweat," a production about a group of people in a factory town who are dealing with the repercussions of a de-industrializing world.

New Stage Theatre will perform this play April 23-May 5. It is currently one of the most produced plays in this theater season, says New Stage Creative Director Francine Thomas Reynolds. It won a Pulitzer Prize in 2017, and has been nominated for Tony Awards and Drama Desk Awards. It received an Obie Award in 2017 for its run at the Public Theater in New York City.

With the theme of New Stage's current season being the "power of place," "Sweat" fit, she says.

"They talk a lot in the play about, 'That doesn't happen to us. This our place. We built this town. We built this city. This is my place. I know the workers,'" she says.

In the beginning of the production, theatergoers meet the group of friends who work on a factory floor, and there's an opportunity for one of them to move to management—blue collar to white collar. They all vye for the job, and when character Cynthia gets it, the dynamic in the group changes, Reynolds says.

"In that time that Cynthia moves to management, there is a process of, you don't know if they're going to close down the plant, but there's definitely a process of laying off workers and asking them to take, like, up to 60 percent cut in pay to make it all work," she says. "There's a lot of discussion about their place: 'Where do I fit in? What do I do now?'"

The play is also about relationships, Reynolds says, including mother-and-son relationships, an estranged marriage and the friendships among some of the workers.

She wanted this to be New Stage's selection of a contemporary play this season because of its popularity but also because it presented an opportunity to showcase local talent, she says.

"It's the type of play that I knew, even though it takes place in Pennsylvania, I knew that our pool of actors would be able to really dive in and do justice to this script," she says.

She hopes the play raises awareness about what's currently happening in the workforce.

"The gap between the 'haves' and the 'have nots' is just getting wider and wider," she says. "Wages are not increasing at the rate of cost of living. People are having to take more than one job to survive."

While the setting in the Rust Belt may not be familiar to some in the audience, Reynolds says the play could take place anywhere.

"You'll recognize what the people are going through just to make a living wage, just to survive, and how they deal with change," she says.

There's also some mystery in the play, as it opens with two characters talking to their parole officers, and the audience learns why as the play travels between the time periods.

Reynolds says that anyone who has a job can probably identify with the characters in the story.

"A play like this helps people reflect and come to (an) understanding about how we have become so polarized," she says. "You see people who are together at the beginning of the play, and then you realize how events affect their relationships. Politics. Economy. All those types of things."

New Stage Theatre (1100 Carlisle St.) will perform "Sweat" April 23-May 5. The theater recommends the play for ages 16 and up, as there will be some language. Tickets are $30 for general admission, and $25 for students, seniors and military. For more information, visit newstagetheatre.com.