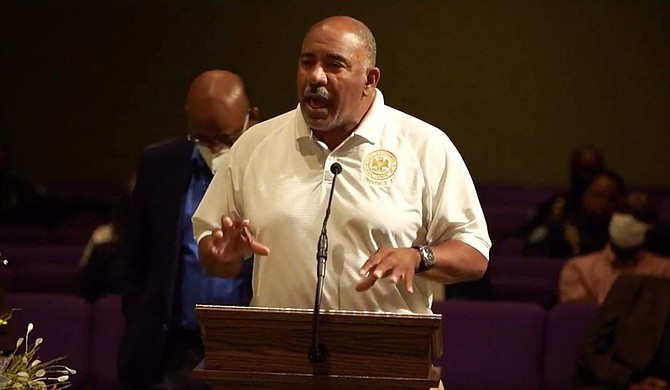 Hinds County District 2 Supervisor David Archie (pictured) filed a suit in the Hind County Circuit Court on Oct. 7 against the Hinds County Board of Supervisors. He said they violated his due-process rights by voting 3-2 to remove him as Vice President on Sept. 29. He followed that with a suit on Friday, Oct. 15, in the chancery court, asking for a temporary restraining order. After the four chancery court judges recused themselves from hearing the case, the Mississippi Supreme Court on Monday, Oct. 18, appointed retired Retired Supreme Court Justice Jess H. Dickinson as special judge. Photo courtesy City of Jackson

On Friday, Oct. 15, Archie had asked the court for injunctive relief in the matter.

"We filed in circuit court (on Oct. 7), and on Friday, we filed in the chancery court for a temporary restraining order and an injunction to stop the board from doing anything until the judge determines who's right or wrong," Archie told the Jackson Free Press in a phone interview Tuesday.

"[T]he Chancellors of the Fifth Chancery Court District hereby recuses themselves from hearing any portion of the above captioned and numbered cause to avoid any appearance of impropriety, and requests that the Mississippi Supreme Court to appoint a Judge to hear this matter," the four chancery court judges wrote in the signed order, citing a relevant portion of the Mississippi code of judicial conduct.

Board President Moved to Remove the Vice

Board President and District 3 Supervisor Credell Calhoun brought the motion to remove Archie as vice president on Sept. 29 at a "special called meeting."

District 4 Supervisor Vern O. Gavin and District 5 Supervisor Bobby "Bobcat" McGowan joined him to vote for the motion, while District 1 Supervisor Robert Graham and Archie voted against it.

On Monday, Oct. 18, McGowan proposed a motion making Gavin the new vice president, with three members of the board voting for it, Archie and Graham voting against it.

However, Archie is insisting that he remains the vice president, asserting that the board's action removing him was illegal. "That's the three-two improper and illegal votes that took place. So that matter is being challenged. So you cannot move forward on that matter," he said on the phone.

‘The Board Can’t Function Properly Because of Him’

The Jackson Free Press reached out to Calhoun on the phone on Tuesday, Oct. 19, about why he moved against Archie. He said he acted because of "his disruption (and) his demeanor.”

“The board can't function properly because of him; he has no control over himself," Calhoun said.

In his Oct. 7 complaint, Archie contended his removal and told the Jackson Free Press that the decision in the case will set a precedent for the functioning of various boards in the state. His accusations against the board include abridgment of his due process rights, suppression of his freedom of speech and rule violation.

During the Tuesday interview, Archie contended that the Robert Rules of Order that the board based its activities upon permits the suspension of the board charter only with the two-third vote, which translates to four votes of the five-member board.

"We were simply saying that the president Credell Calhoun has not followed Robert's Rules of Order and has not followed our bylaws in our charter," Archie said. "It takes two-thirds of the vote to suspend the charter."

'You Got Three Votes That Did It'

Board President Calhoun, on Tuesday, declined to comment on the court cases but said that the board's decision to remove Archie from the position of vice president and to instate Gavin into the role stands. He said that the board had met the demand of Robert's Rule of Order to give notice before such removal, stating that he gave the notice at the Sept. 7 board of supervisors meeting.

"We only have to vote to notify because of the Roberts Rules of Order, that's all," he said. "But three votes is what controls the board; you are the board when you’ve got three votes."