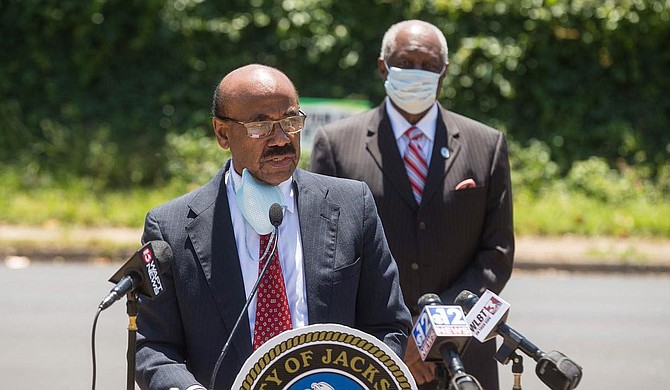 Hinds County Board of Supervisors Vice President Credell Calhoun said the board is making all effort to ensure that people are safe on election day. Photo courtesy City of Jackson

Members of the Hinds County Board of Supervisors sought to allay the fears of some about voting on Nov. 3 at their meeting Monday.

WJTV's Alex Love reported on Oct. 12 that safety in that election is in jeopardy in the wake of a dispute between District 2 Supervisor David Archie and Hinds County Election Commission Chairwoman Toni Johnson on how to spend the $1.5 million Chicago's Center for Tech and Civic Life election-safety grant.

"We want the people of Hinds county to know that we are going to have a safe and secure election this November the 3rd," Archie said Monday while commenting on a discussion item at the meeting. "We want you to get out and exercise your constitutional right; we want you to cast your vote."

"If you need to vote absentee, go right ahead and get it done; there is no reason for anybody in Hinds County as well as the city of Jackson to think that we will not have a safe and secure election," he added.

Board Vice President and District 3 Supervisor Credell Calhoun said the board is making all efforts to ensure that people are safe on election day.

"The board of supervisors will do everything humanly possible to make sure that Nov. 3 will be the safest election ever in Hinds County," he said. "We will use every penny that we can find anywhere out there to make sure that the voters are going to be safe when they go to the poll."

At the Oct. 12 meeting, the board apparently approved the grant in line with Archie's changes to the initial list submitted by the election commission. However, this week, on Monday, the board of supervisors rescinded the approval.

Board of Supervisors President Robert Graham said he wanted the Oct. 12 decision rescinded because the list of expenditures did not cover the county's five districts, and some items were overpriced.

He also said that the board had not received any money from the grant. Previously announced measures to make the poll safe included regularly cleaning surfaces, providing facial masks and gloves.

Johnson told Jackson Free Press on Monday that she told the grantor to hold the money because of Archie's changes to the list, which she believes does not reflect the grantor's priorities.

"Initially last week, if you have been following what happened, Supervisor David Archie basically was trying to stranglehold the grant by trying to place vendors of his choice that did not align with the grant's scope," she said. "And I was very instrumental in securing this grant for Hinds County, and before the commission allows a supervisor to come and mishandle the money that is intended for a safe and secure election, I spoke with the grantor and asked them to hold up the fund until that we can have this worked out."

"As of right now, the grantor sent an amendment," she added. "In the board meeting today, I did not see Supervisor Graham take up their motion. What they did do was rescind all of their votes from last week's meeting, which was done incorrectly, and (is) illegal in my opinion."

"But they did not accept the new terms of the grant, which says in order for anything to be spent outside of the approved scope of work, we have to have approval in writing from the grantors first. So that did not come up; what will happen with the fund, I don't know as of now. They have not sent the fund. They were supposed to send them this evening contingent upon the action by the board."

There was a "motion to accept the CTCL's recommendation" on the agenda Monday under Graham's name, but he did not bring it to the floor. He said that is because there is no list before the board for expenditure approval, even though the item does not mention a list.

Archie, in a statement published by WJTV, said Commissioner Johnson is accusing him falsely.

“Unfortunately, Commissioner Johnson has taken this as an opportunity to publicly spew false accusations and derogatory statements against me in a personal, vindictive attack to tarnish my reputation as has been her practice since she made an unsuccessful bid to win the District Two Supervisor seat,” he said.