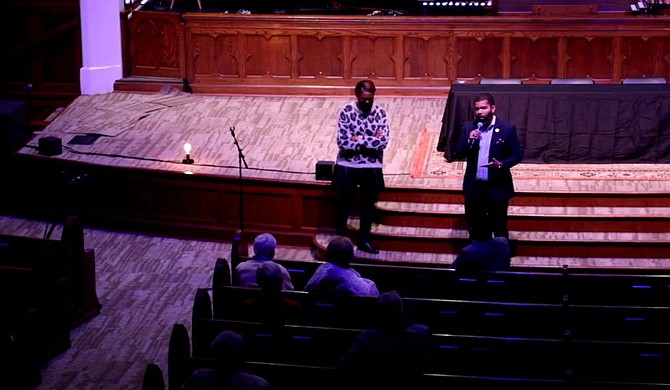 The City of Jackson has opted for blind evaluation of garbage-disposal technical proposals to guard against claims of unfairness, City officials said at the town hall held at Fondren Church (3327 Old Canton Road) on Thursday, Nov. 11, on the contracting process. Interested companies have until next Wednesday, Nov. 23, to submit proposals to the City.

"Let us make it blind to eliminate all doubt," Mayor Chokwe A. Lumumba said last week. "They can't put watermarks on their papers; they can't use any identifying markers to let it be known what that company is."

"And so you're just voting on the merits of those proposals," he added. "I think that adds another layer of objectivity."

At 6 p.m. today, the City will hold a second town hall to explain the contracting process at New Horizon Church (1770 Ellis Ave.).

In August, the City Council twice voted down FCC Environmental Services as the winner of the last round of bidding for the City's garbage disposal contract. The Council raised objections regarding the proposed reduction of pickup days from twice a week to one day a week and the increase in cost. The mayor, however, accused the council of acting in favor of Waste Management Inc, the current contractor at the time, and stated that an increase was inevitable.

After the Hinds County Chancery Court mediated between the mayor and the council, the City is now in the second month of a stop-gap six-month contract with Waste Management Inc, which has, for 35 years, held the City's waste disposal contract.

City Attorney Catoria P. Martin announced last week at the town hall in Fondren that city officials will evaluate the submitted proposals between Nov. 23 and Dec. 13 and sign a contract with a new vendor on Dec. 15. The mayor will present it to the council on Jan. 4, 2022, about 60 days before the emergency contract with Waste Management ends.

"Typically, based on industry standards, it takes about 60 days for a vendor to come in and take over this current and be ready to pick it up from the old vendor," Martin said. "We can't assume that the incumbent will win because the goal is to get the most advantageous contract for the city of Jackson."

She explained the contract proposal evaluation criteria to include 35% for the cost, with the lowest getting the full mark, 25% for presentation, 10% for Equal Business Opportunity, which lays out minority participation, and the blindly judged technical proposal, 30%.

"We had a lot of issues on our first round of issuing this RFP and trying to get a solid waste contract in place," Martin said at the event. "So, when I came in as city attorney, I looked at the RFP (and tried to) clean it up in some ways while also making sure there was no question of impartiality."

The City of Jackson has not raised the cost of solid waste disposal since 2008 and has remained at a flat rate of $20.80 weekly, Martin said. Experts told the city that the usual practice was for a slight yearly increase in solid waste disposal costs in line with the Consumer Price Index.

Solid Waste Division Manager Lakesha Weathers said at the event that her department had not purchased equipment in my department since 2012, as the $4.80 is not enough to fund it.

"I have trucks now that stay in the shop more than out on the street," she said. "We can't repair those things and purchase those pieces of equipment because we don't have the funds."

She said that she said the city is proposing an increase to $8.80 to cover those costs.

"I have two people currently picking up litter for the city of Jackson," Weathers said. "I went from a staff of 42 to a staff of 17."

"If we don't have this increase, we can't even cover our collection contracts."

"And so the city has started borrowing from its general fund to cover the cost of sanitation," and anticipates an increase from $20.80 to $35, Martin said.

Based on conversations with the federal government over the Environmental Protection Agency consent decree that the city is under, it will also have to increase water and sewer bills, which have not changed since 2013 also.

"The average bill is currently $54 for just water and sewer, and so what we plan on doing is an increase to $64 on average," Martin said. "The goal is for an average family of four to be looking at $100 or less for water, sewer, and sanitation combined."

As part of the City of Jackson's cost-cutting measure, is a portion of the contract proposal requirement for the once-a-week garbage disposal and for households to get a 96-gallon cart each.

However, some of the people gathered at the Fondren Church pushed back against the idea, saying that it is difficult for older people and people living with disabilities to move such a large cart, with a concern that the once-a-week pickup represents a decrease in service.

The mayor responded that some people might not afford the increased cost of maintaining twice-weekly garbage pickups.

"If there is unity in that we pay the higher costs, and that's fine, then that's not a problem."

He insisted that nothing in terms of the contract said that garbage collection is only through the can. He said that "it's still allowed for you to use your favorite can, if you want to use it, or if you want to put it in bags."

City Attorney Martin said that continuing with twice-a-week garbage disposal based on the last round of proposal submission will result in $45 instead of $35 in sanitation fee.

"Once a week is cheaper, and part of once a week is us increasing to a larger cart," she said. "With that 96-gallon cart, the theory is that if we go once a week, people need a larger garbage can."