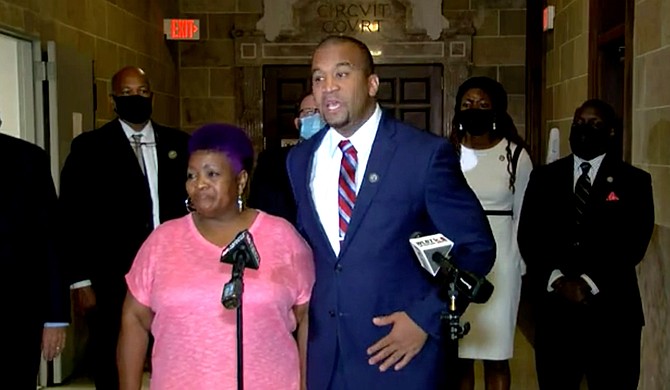 Desmond Barney and Lincoln Lampley, two Jackson police officers indicted for 62-year-old George Robinson's death, walked free on Thursday, May 20, after Hinds County Circuit Judge E. Faye Peterson rendered a directed verdict in the case. He died on Jan. 15, 2019, two days after an encounter with the police, who body-slammed him, and he had a cut on his head.

Robinson died at the University of Mississippi Medical Center, and the death was ruled as a homicide.

In a directed verdict, the judge ended the proceeding by rendering judgment in favor of the defendant after a motion for it. The former Hinds County district attorney agreed that the presented evidence lacked legal sufficiency for the case to proceed to jury verdicts.

The two defendants in the case and another JPD officer, Anthony Fox, were indicted in August 2020 for second-degree murder. The Jackson Free Press previously reported that it was not the first time the officers had been present at previous officer-involved shootings.

Peterson concluded that the evidence in the case presented on Tuesday, May 18, and Wednesday, May 19, was insufficient to put before a jury, even for a lesser case of manslaughter, and cited the 2020 Mississippi Appeals Court decision in Brown v. State, which she said is similar to the officers' case.

"In Brown, our appellate court reversed the conviction of culpable negligence manslaughter," she said. "In Brown, the defendant was a bartender who was charged in the death of a person who he attempted to remove from a club where he worked."

"The appellate court held that those facts were insufficient to demonstrate negligence so gross as to be tantamount to a wanton disregard of or utter indifference to the safety of human life," she added. "Finding that one physical act of restraining a person was insufficient to put to a jury, the issue of guilt on the charge of manslaughter by culpable negligence, surely the act of an officer in the course and scope of his duties to merely put his knee on the defendant’s arm and another who restrains his hands would be insufficient to charge these defendants with manslaughter as well as second-degree murder."

Peterson explained that she reached the decision because the evidence presented did not show a conspiracy as Deputy Chief Deric Hearn deployed the men on the assignment.

"Detention of a suspect is not an illegal act when it's performed by an officer acting within the scope of his employment," Peterson said in her judgment. "There is no conspiracy as they were deployed by Deputy Chief Hearn to participate in the sweep and investigation in the area."

"There was no proof presented that at any time, the defendants were conspiring to commit any unlawful act against Mr. Robinson," she added. "For the court to view the statements of the officers as favorable to the State, then the court would have to determine that the defendants' statements are self-serving and untruthful as they do not incriminate the defendants but only placed them on the scene."

The judge said that none of the three State witnesses who saw what happened to Robinson on Jan. 13, 2019, "state any acts of the defendants that caused any injury to Robinson. There were numerous other unidentified officers on the scene who were not identified or charged in any way."

"Based on the testimony evidence presented by these witnesses, the state has not made a prima facie (case) showing that defendants committed any of the offenses charged in the indictment."

Peterson dismissed the case "with prejudice," meaning that the case cannot be tried again on the charges.

Hinds County District Attorney Jody Owens expressed surprise at the verdict, saying it is unfortunate that the judge did not allow the case to proceed to a jury verdict. He said that the second trial in the case involving Anthony Fox will proceed.

Owens said that after he took over as DA, he then proceeded with further investigation of the case incorporating an independent medical examiner's report indicating that Robinson's cause of death was a homicide. He presented the case to a Hinds County grand jury, which indicted the three officers.

Owens said that a difficulty in the case was because the officers involved were in "SWAT paramilitary gear" and covered their faces. "It was difficult to identify those," Owens added.

He said the evidence showed that a traumatic brain injury occurred and that medical examination showed "subdural hemorrhage of the brain,"

"We certainly met with all the medical providers, and all of them were consistent that this individual died by a manner of force that was significant enough to cause a brain bleed, and the evidence tracks that," he said.

Owens said that the JPD asked this office to get involved in all police cases, particularly relating to homicide.

Family Reacts: ‘They Know They Murdered My Brother’

Robinson's sister Bettersten Wade said that his brother had just suffered a stroke when the incident happened and might have been moving slowly to get out of the car. "He was fine. He just had had a stroke, but he was going to get better," she said at the press briefing this week.

Wade said police used excessive force to pull his brother out of the car and is convinced that they killed his brother though she can't say any of the officers on trial did it.

“I can say out of all of them, they know they murdered my brother, my brother was murdered. So I mean, whatever they can take out of (the fact) that he was murdered. So they will have to live with that," she said at the media briefing, adding that she regrets that her brother had to die on her birthday.

"I'm not going to hate them, but I hate it happened to my brother. I would rather just see him sitting in a jail cell, and I could go see him," she said. "But right now, I can't even go see you because he lost his life, and he lost his life on my birthday. So every time my birthday comes up, what do I have to think about?"