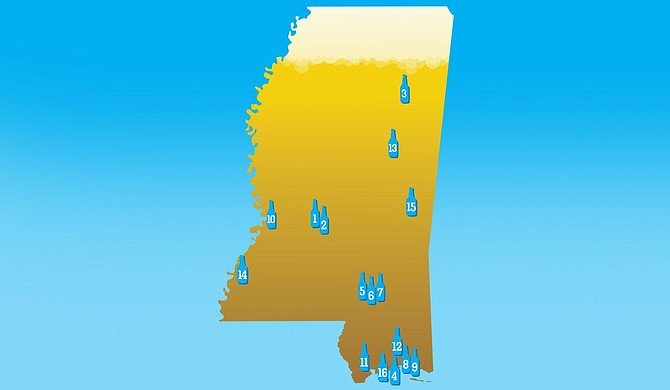 Beer connoisseurs know that little helps beat the Mississippi summer heat better than sipping a cold brew. Fortunately, the Magnolia State harbors more than a dozen locally owned breweries that supply Mississippians and travelers alike with a variety of stouts, sours and everything in-between.

Set to open later this year, Fertile Ground sets out to create a “third space” environment, intended to serve as a communal space of sorts for guests to socialize while enjoying a few drinks.

Earlier this year, the company that markets itself as North Mississippi’s first brewery debuted the 1817 Brewery Mobile, a refrigerated vehicle the business can use to deliver its products to areas beyond Okolona.

Gulfport natives Cammack Roberds and Cain Roberds founded their company in December 2013, which they named in honor of the Chandeleur Islands found near the coast of Mississippi.

Colludium, which Marcus and Christine Cooper founded in Marucs’ hometown of Hattiesburg, offers 100 board games that guests are invited to play at the brewpub.

“So Pro,” as locals call it, offers curbside pickup on canned beers and other merch and sells many of its brews on tap for those who want to sit-in to sip a cold one.

In addition to its brews, The Porter showcases a full menu of pub food fare, including all-day breakfast, sandwiches, desserts such as cookie dough egg rolls, and more.

Doubling as a bistro, Craft Advisory offers both a weekday and weekend menu, as well as a loyalty program, wherein customers earn one point for each dollar they spend.

The micro brewery sells its craft beers at The Cypress Taphouse, a restaurant whose menu includes a number of fried, grilled and smoked dishes, among other items.

In 2018, Zach and Kaitlyn Erikson founded Key City after being inspired by Belgian brewing traditions they witnessed on their honeymoon. Vicksburg restaurant Cottonwood Public House sells their brews.

Serving its beers since 2005, the packaging brewery invites customers onto The Porch to sip on one of more than 100 beers while dining on a brick-oven pizza.

Co-founders Derek and Jean Irby named their brewery after the Crossroads at Mayhew, a place where college students would often go to drink and socialize during a time when Starkville outlawed alcohol.

Lisa Miller founded and owns Natchez Brewing Company, which uses recipes for craft beers that her husband Frank Miller created since he discovered a passion for brewing while stationed in Asheville, N.C.

“When glasses rise, llamas fly,” so goes the slogan that founder David Reese coined for his brewery. Fly Llama sells both craft beer and hard seltzers at its Biloxi location.