Local Brews for Me and You | Jackson Free Press | Jackson, MS

Local Brews for Me and You 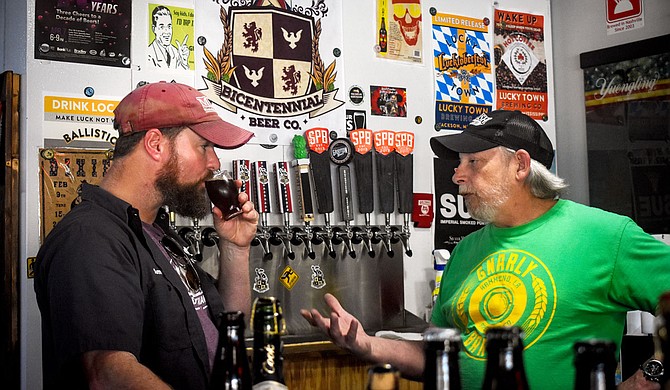 Voss and Dylan Broome opened LD's in December 2014 in northeast Jackson initially as a craft-beer retail store to serve the needs of local beer lovers. Over this past summer, however, an entirely new dimension began in LD's with the collaboration of Chris Edwards and his Bicentennial Beer Co., which has helped LD's evolve into a popular brewpub in the Jackson metro.

Originally from West Lafayette, Ind., Voss moved to Jackson about 15 years ago to work for a local engineering firm. After 30 years in the manufacturing sector, though, he wanted change. "I wanted to do something different, something a little more rewarding in my old age," he says.

The store carries more than 300 different beers, including both craft and popular light selections, which Voss views as an opportunity to get customers into the store so that he can then introduce them to better-tasting brews. At LD's, customers do not necessarily have to buy an entire six-pack,; patrons can purchase one beer at a time. The store offers this option as an incentive to try new beers.

"This gives them the chance to try a beer they may not have been willing to try otherwise," Voss says.

Upgrading LD's into a brewpub "wasn't in the original business plan," Voss says, although it had been in the back of his mind since opening the store. He and Edwards had been friends for years and, after much discussion, decided to take the plunge. Edwards, a software engineer by day, brews the homemade creations.

After moving to the Jackson area from  Macon, Miss., in 2000, Edwards says he started out with a simple home-brew kit and was "bit by the bug and just started brewing more and more and more. I've been brewing a long time, and I've gotten pretty good at it," he says. As a Beer Judge Certified Professional, Edwards has consistently brewed beer for 12 years.

Weekends now for Edwards involve brewing, sometimes alone and other times with friends and other beer enthusiasts. A brew day takes about seven or eight hours, and he brews with the philosophy that a little goes a long way.

"You always want to start small because you can always add more, but you can never take it back," he says.

The brewing is done by barrel size of 31.5 gallons, or half a barrel at about 16 gallons. "The half-barrels give us a lot of flexibility to do different things," Voss says. Edwards adds, "If a batch does go bad, then there isn't a lot lost."

Currently, LDs operates 12 taps, of which six or seven are reserved for their own beers, and the rest are used for other local brewers. Their beers have colorful names such as "Bolshevik's Revenge," a Russian Imperial Stout; "L to the G," a lemon-grapefruit sour; and their most popular beer, "Jacktown Haze," an IPA.

The beers often at LD's rotate so that the brewers can experiment with new flavors, and every batch has some changes, allowing customers to have a slightly different experience each time they visit.

LD's BeerRun allows small samples of their draft beers for people to taste.

"Our motto is 'Always good times at LD's,'" Voss says, which is reflected in the store's recently being named Best Beer Bar in Mississippi for 2020 by craftbeer.com.