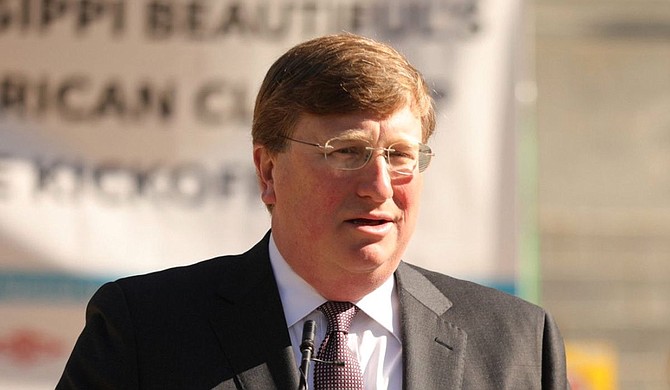 Gov. Tate Reeves expressed his support for a legislative special session to reimplement a state medical marijuana program this Tuesday at a Lee County press event. The state Supreme Court struck the program from law on May 14. Photo courtesy State of Mississippi

The question surrounding the reinstatement of Mississippi’s medical marijuana program may be drawing closer to an answer this week, after Gov. Tate Reeves announced his support for a legislative special session in a Tuesday press briefing.

Reeves insists that the state Legislature reaches a consensus on how to implement the program, but says he’s willing to call a special session once that happens. “We are again continuing to try to help facilitate that, to move it along,” Reeves said.

The governor had previously demurred from the question of calling a special session to reimplement Mississippi’s medical marijuana program, which the state Supreme Court struck down on May 14. Repeatedly, the governor has insisted that the House and Senate must reach an agreement on the dimensions of the medical marijuana program before he will consider calling them in for a special session.

Finding that accord may be more difficult than expected. The 2021 Legislative session was remarkable for its speed and its internecine conflict, with procedural and policy battles between House and Senate resulting in the death of even some of the best-laid plans.

“There's good reasons to do it ... and reasons to consider it a not-so-good idea,” Reeves said of the potential session on May 18.

Other members of our state leadership have expressed support for the Legislature’s speedy return to reinstate the program, including Speaker of the House Philip Gunn and Lt. Gov. Delbert Hosemann.

"If the governor chooses to call the Legislature back into special session, the Senate will be ready," Hosemann said on May 18.

As for when a special session might be called, Reeves was unsure, but noted the urgency with which supporters have called for legislative action. Differing opinions as to the breadth, ease of access, types of marijuana available, tax structure and zoning restrictions of the medical marijuana program are some of the key sticking points that remain.

Even as statewide leadership has demanded a tight focus for any special session, some lawmakers have argued for the re-litigation of some of 2021’s other unfinished legislative business. Rep. Trey Lamar, R-Senatobia, chairman of the House Ways and Means Committee, suggested on SuperTalk that the special session could address the abolishment of the state income tax.

Reeves, for his part, is pushing for a quick and specific set of plans. “Next week is not likely but clearly, it should be sooner rather than later,” Reeves said. The issue of reviving the ballot initiative process itself, too, was not on the table for Reeves.

“The timing is a little less concerning with respect to that,” he stated.

The governor has the sole authority over what the Legislature may consider in any special session. If he makes the determination that only medical marijuana may be considered, all other discussion—of ballot initiatives and income tax alike—will be moot.