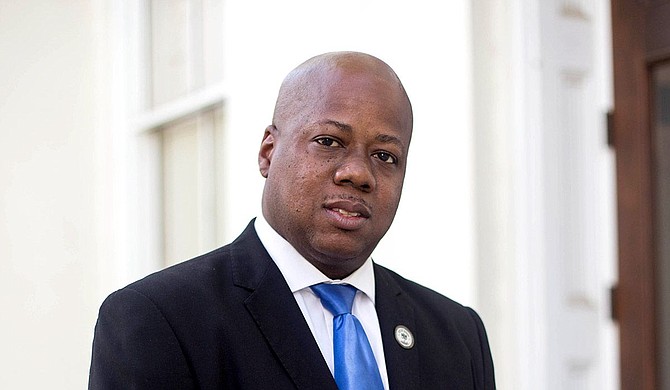 Jackson City Council President Aaron Banks of Ward 6 introduced the ordinance to add vehicle towing to the offense of drag racing in the city of Jackson. The amendment took immediate effect after the city council on Tuesday, June 8, suspended the provision for a 30-day wait before its application. Photo courtesy City of Jackson

Anyone who participates in drag racing in the Jackson city limits risks officials towing their vehicle, in addition to possible fines and jail time, a new ordinance indicates. On June 8, the Jackson City Council unanimously approved the ordinance, which amends the previous one established in 2005, named "Charles 'Chuck' Griffin, Jr. ordinance," after a vehicle struck an 18-year-old in 2005 while drag racing on Dorgan Street.

His father, Charles Griffin Sr., addressed the city council on May 25 when it introduced the amendment. "What happened to my son, Chuck, is something that could happen anywhere at any time if people don't take the time to look around their community and do something about the plague of drag racing, unauthorized unregulated drag racing," he said.

Chuck Jr. visited one of his friends in south Jackson and was standing at the front door of the house when a car in a drag race hit the side of the road and flew up to hit him, and he died a day before his 19th birthday on Oct. 21, 2005.

"We went from planning a birthday celebration to, literally, planning a funeral," the father said. "[T]hink about the people who are on the sidelines, the people who were just standing there, who just happened to be there, who just happened to be driving their car, who's standing there with their kids trying to go in their house; those are the folks you've got to try to protect."

‘Willfully Stopping the Flow of Traffic’

The 2005 ordinance enacted in the wake of Griffin Jr's death leveled a $1,000 fine on drag racers and/or up to six months of jail time. In the amendment, the first citation for drag racing comes with a 10-day jail term, or $500 fine, or both. Subsequent offending increases the possible jail time to 30 days and/or a fine of $1,000.

The legislation also covers "willfully stopping the flow of traffic onto or on municipal public, streets, roads, or property, state and federal highways." The City will tow the vehicles involved in all cases.

"I know it seems harsh that (we’re) saying that we want to take someone's car at the first offense,” Ward 3 Councilman Kenneth Stokes said on May 25. “I know how important it is to have these cars, but I need them to look at Mr. Griffin and understand that it may not be all of them, but that one that gets killed, that's going to devastate that family forever."

The motorist will pay $125 towing cost and $35 per day for impound lot storage. The amendment goes into effect immediately.

"There has been a significant challenge as we've seen the drag racing taking place," Mayor Chokwe A. Lumumba said at the May 25 council meeting. "The threat of incarceration or the threat of detention is not significant because we're not taking misdemeanors in many regards right now, and so this (amendment) creates an ability to hold accountable those who are doing this on a consistent basis."

"There is some level of accountability and responsibility that you should not endanger people," he added. "And so you weren't demonstrating a concern over the financial penalties that you would suffer when you chose this action. And so I'm OK with (vehicle towing as) a first offense."

Council President and Ward 6 Councilman Aaron Banks, who sponsored the amendment, said on May 25 that the previous ordinance was "very vague."

"We have had a lot of drag racing, traffic being stopped on the interstate, Woodrow Wilson (Avenue), donuts on properties, people being put in danger and we've all discussed the need and the importance of stiffening the penalty," he said.

"As a matter of fact, (Jackson Police Department) Chief (James) Davis also requested that we increase the penalty of our ordinance to give him something to enforce when it comes to this."