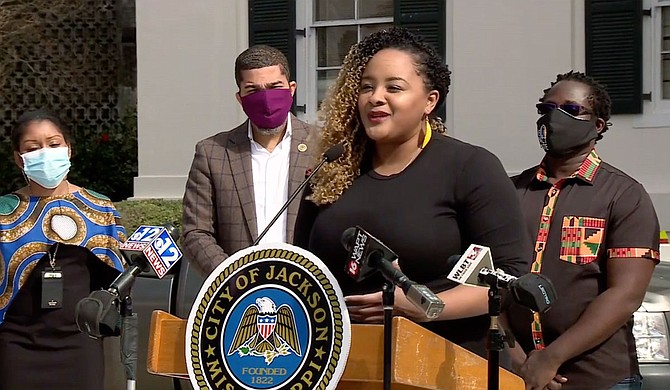 Seven Jacksonians will explore the intersection of arts and social justice to create change and to address prevailing arts grantmaking inequities. The City of Jackson announced Monday that a three-year $1.2-million grant from the Surdna Foundation will fund the 2021 fellows of the Live. Impact. Create. program.

"This initiative is really intentional about funding artists to use their creativity, their artistic skill to be able to make a real-time real-life impact in the community, and so with that, they're funded $25,000 (each) to spearhead projects in the community that go beyond the beautification of the community, but also to provide real-time change in the community," project partner Maranda Joiner said at a press briefing Monday.

The program will involve personal and professional development programs and forums for the artists to connect with the community and then incorporate the information they gather into their creations.

"So we're really excited to get started," Joiner said. "And so look forward to us having Zoom meetings, inviting the community into the people's assemblies that we will be having, as well as connecting and volunteering to help us execute these real-time changes that we want to see in our community."

Mayor Chokwe A. Lumumba said the fellows will partner with young Jackson creatives to cultivate unorthodox solutions to community problems.

"The award will be distributed in equal parts over the course of three years through Surdna's Thriving Cultures program, which will support up to 260 projects by artists of color working with their communities around the country to imagine and practice racially just systems and structures," he added.

The mayor also announced that the Keith Haring Fitness Court is coming to Jackson, describing it as a significant investment.

"The Greater (Jackson) Arts Council (has) been selected for a limited-edition signature series Keith Haring fitness court by the national fitness campaign," he said. "The outdoor fitness court is set to be installed at the intersection of State Street and Woodrow Wilson (Avenue)."

Keith Haring was a street and graffiti artist who gained fame during the 1980s in New York City. Much of his work was focused on AIDS awareness, and he died from AIDS-related complications in 1990.

In an order on Feb. 2, the city council accepted the project, which will be free to the public. GJAC will provide the matching grant.

"(GJAC) will commit to construction and launch of the outdoor Fitness Court at the end of 2021," the order said. "(This move) will encourage healthy lifestyles, highlight the City of Jackson's commitment to arts and culture and earn local and national recognition for the city as a leader in providing access to Healthy Infrastructure."

The Robert Wood Johnson Foundation is providing $475,000 in funding [LINK: https://www.jacksonms.gov/jackson-awarded-robert-wood-johnson-foundation-grant-to-address-health-equity-and-effects-of-climat-change/ ] to implement solutions to mitigate the health impacts of climate change in the city of Jackson, the mayor said Monday.

"In particular, we want to adopt a nature-based solution from cities that we have learned from across the globe to deal with excess heat," Lumumba said of the project called Going Green for a Cool, Heathy Jackson. "We have looked towards this grant in order to do heat mapping across our city so that we can mitigate where there is disproportionate effect amongst communities within the city of Jackson."

"(The heat) disproportionately affects people of color, young children, elderly, socially isolated individuals, and people with chronic health conditions or limited mobility," the mayor added. "With this grant and project, we reaffirm our commitment to reducing health vulnerabilities in the city of Jackson."

"(The project is) designed to reduce mortality and prevent illness associated with Urban Heat Island Effects in Jackson (Mississippi) while providing a range of social, economic, cultural and ecological co-benefits for the city's most at-risk residents," the orders said.