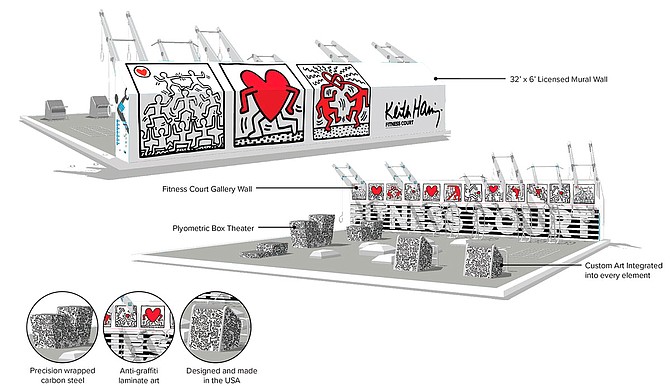 The Greater Jackson Arts Council recently announced that it has partnered with the San Francisco-based National Fitness Campaign to make Jackson one of 10 locations in the United States to host a Limited Edition Signature Series Keith Haring Fitness Court.

Each Keith Haring Fitness Court prominently features a 32-foot-wide mural wall depicting artwork from the eponymous artist, a Pennsylvania native who moved to New York City and made a name for himself creating white-chalk drawings on advertising panels covered with matte black paper in the city's subway stations. Haring produced hundreds of public-art installations between 1980 and 1985, and in 1986 opened the Pop Shop in Soho, which sells T-shirts, toys, posters, buttons and magnets adorned with his artwork.

In 1988, doctors diagnosed Haring with AIDS, leading him to establish the Keith Haring Foundation, which still provides funding and artwork to AIDS organizations and children's programs, in 1989—a year before his death in 1990.

Jackson's Keith Haring Fitness Court will have an 8-foot-by-25-foot space with an integrated sports floor that can support hundreds of bodyweight abdominal exercises. The court will include plyometric boxes for step-ups and squat exercises; destabilized rings and stabilized push ladders for shoulder, chest and tricep exercises; an open speed zone for sports training drills, balance programs and burpees; variable height bend stations to exercise the lower back, glutes, and posterior chain; and more.

The National Fitness Campaign  stations personal fitness trainers at each court and offers an online content library and a free phone app detailing all the possible exercises on its website.

"The Keith Haring Fitness Court is going to be a great tourist destination with great walkability and visibility right near the Market to Museum Trail," Janet Scott, the former executive director of GJAC who recently passed her title to Silbrina Wright, told the Jackson Free Press. "All the equipment there will use your own body strength to train rather than traditional equipment, and it's built so that anyone can use it in any number of ways. Once it's complete we plan to partner with the City to host fitness classes there and use it as a venue for health and wellness and art exhibitions."

Planning and fundraising for the construction are both underway, GJAC said in a February press release, and the Keith Haring Fitness Court is on schedule to be complete and operational by the end of 2021. Jackson's fitness court will be in Wicker Wilson Park, which is at the southeast intersection of State Street and Woodrow Wilson Drive across from the University of Mississippi Medical Center's Children's of Mississippi building.

"This fitness court is going to be a  major feather in the cap of Jackson, seeing as there are only 10 facilities across the United States and we'll have only one in the Southeast," Rickey Thigpen, president and chief executive officer of Visit Jackson, says.

"Getting it was a competitive process that we were honored to participate in. A lot of people may not even know Wicker Wilson Park exists right now, and this will be a great way to bring attention to it. It has a great central location to the medical, residential and academic corridors of Jackson, so plenty of people will be able to use it to get exercise while enjoying art as well."

For more information on the new Keith Haring facility, visit greaterjacksonartscouncil.com or nationalfitnesscampaign.com.