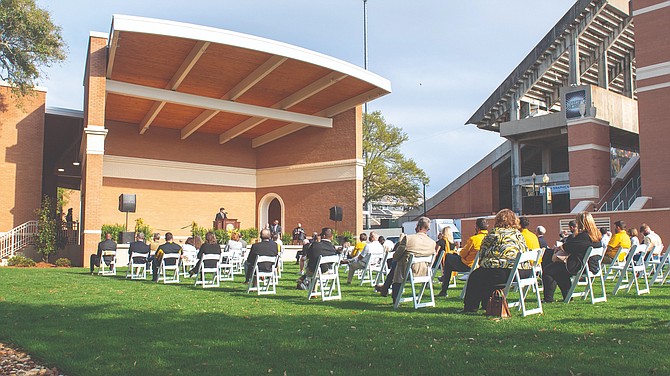 The University of Southern Mississippi's Southern Miss Alumni Association recently announced the completion of a multi-use entertainment venue called Southern Station in Spirit Park on the university's campus. USM began construction of the station in 2020 as part of the Alumni Association's celebration of the university's centennial. The venue's name refers to the former postal address for the institution's Hattiesburg campus, a release from USM says.

Southern Station features a 34-by-24-foot stage and more than 1,250 square feet of event space behind the stage, which overlooks M.M. Roberts Stadium. The facility also features climate-controlled restrooms and a 275-square-foot space for storage or event preparation.

Mississippi State University's Center for Entrepreneurship and Outreach recently hosted its annual Startup Summit, a student business venture competition. The event concluded with a first-place tie between Shuvam Saha, an engineering doctoral student from Kolkata, Ind., and Stone Vincent, a fashion design and merchandising master's student from Bolton, Miss. The two each received a $5,000 award.

Three judges committed $6,000 additional prize money to help fund the five highest-placing projects due to the ties at first and third place and the high-quality presentation of viable business plans, MSU's release says.

For more information or to see the complete results from the 2021 Startup Summit, visit ecenter.msstate.edu/summit.

Jackson State University and four other historically black colleges and universities recently joined the Smithsonian's National Museum of African American History and Culture's consortium, which aims to improve the participating universities' ability to share archives that tell the story of African Americans and their role in American culture and history.

NMAAHC's strategic partnerships office is leading the consortium, which will feature internships, fellowship programs and professional training for underrepresented groups to establish a pipeline of museum and archive specialists in the next generation, a release from JSU says. NMAAHC will also assist in digitizing HBCU collections and creating a digital archive in an easily accessible format for academic scholars and the general public.

The consortium also plans to develop a traveling exhibition drawing on the collections from the partner universities, which will begin at NMAAHC and then travel to the consortium members and other venues around the United States. The other consortium universities are Clark Atlanta University, Florida A&M University, Texas Southern University and Tuskegee University.

For more information on NMAAHC and the consortium, visit nmaahc.si.edu.