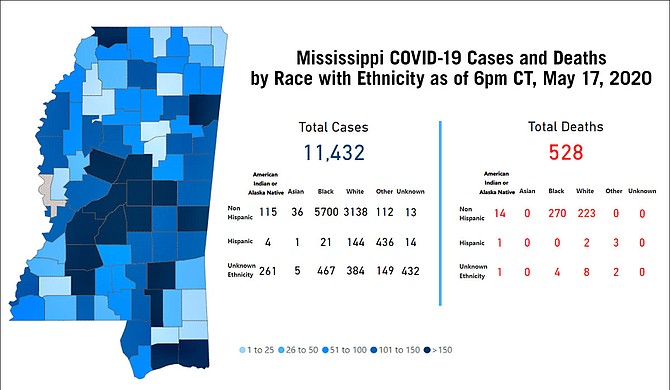 Mississippi saw 136 official new coronavirus cases and seven deaths as of 6 p.m. on Sunday, May 17, bringing the total number of statewide cases to 11,432 and deaths to 528, as many Mississippi businesses began reopening over the weekend. Photo courtesy MSDH

Mississippi saw 136 official new coronavirus cases and seven deaths as of 6 p.m. on Sunday, May 17, bringing the total number of statewide cases to 11,432 and deaths to 528, as many Mississippi businesses began reopening over the weekend.

Long-term-care facilities such as nursing homes, which are considered high-risk locations because their residents are older or in poor health, have reported 1,489 cases so far throughout the state. MSDH, so far, is refusing to release names of those nursing homes. The Pine Belt News in Hattiesburg filed a lawsuit against the State seeking identification of the facilities.

The Mississippi Press Association released a statement in support of the lawsuit.

"In the best of times, Mississippi citizens are entitled to adequate disclosure of information from the State Department of Health and other agencies that is in the interest of public welfare," MPA President Kevin Cooper, senior vice president of Boone Newspapers Inc., said in the statement. "And certainly in these times of a great public health crisis, MSDH should do more to release information the public deserves to know about where and how this disease has spread.”

Hinds, Lauderdale and Madison counties currently have the largest number of cases reported with 773, 589 and 543, respectively. Lauderdale, Forrest and Pearl River counties have seen the most deaths at 46, 27 and 26, respectively. All three are counties with high numbers of cases and deaths in long-term-care facilities such as nursing homes.

Issaquena County in west-central Mississippi remains the only one of 82 statewide that is not reporting official cases to date, likely due to its miniscule population: the least of any county in Mississippi.

African Americans currently make up 52 percent of reported COVID-19 deaths, even though they comprise 38% of Mississippi’s population. African American women are the most heavily affected group in the state, accounting for 3,610 of the total cases. Black men account for the highest number of deaths, at 146.

Roughly 17 percent of all investigated cases have resulted in hospitalizations. MSDH releases weekly estimates of how many infected people have recovered from the disease, which currently stands at 7,681.

The MSDH Public Health Laboratory has tested 19,049 individuals for COVID-19 as of May 17, and 2,228 tests returned positive results.