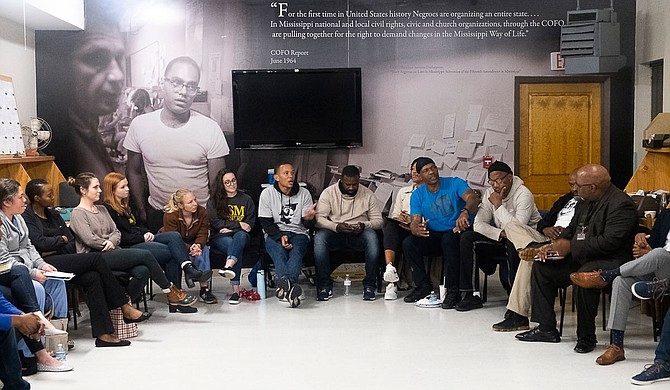 Brenda Scott's voice trembled as she addressed the 50 or so people with whom she was seated in a circle. "I have a grandson right now who is on the verge of going to prison," she said, fighting back tears.

"I think y'all said something about intervention," she continued, "and I just need to see—I don't know if there's someone in here that would, you know, meet with me, to talk to him."

"Ms. Scott, I got you," responded John Knight, an anti-violence activist and member of the Strong Arms of JXN, the capital city's inaugural credible-messenger and violence-interruption strategy that hosted the Tuesday-evening meeting at the COFO Civil Rights Education Center on Lynch Street. Scott and Knight agreed that they would exchange phone numbers at the meeting's end.

The exchange embodied the spirit of the meeting, one rooted in bringing together members of the local community to share concerns and resources aimed at preventing violence in Jackson. It was the Strong Arms of JXN's first meeting of the year, although the group has been holding meetings since 2018 after activist and attorney Rukia Lumumba started the credible-messenger and violence-interruption initiative with her childhood friend Terun Moore.

Moore, a native of Jackson, had been released from prison after serving a 19-and-a-half year sentence, beginning at age 17, for killing a man during an armed robbery. He wanted to use his experiences to dissuade other young people in Jackson from going down the wrong path and support them in making healthier choices. Moore and Lumumba then recruited Benny Ivey, another formerly incarcerated man and former white gang leader from Jackson, who wished to engage in similar efforts to steer others away from a life of crime.

The trio established the initiative the same year Jackson experienced its highest murder rate in more than two decades. The city saw 84 murders in 2018, up more than 30% from 2017. In 2019, Jackson continued to struggle with high homicide rates. The city saw 82 murders, down just 2% from 2018.

Moore and Ivey are the city's first trained credible messengers and violence interrupters following the Cure Violence model pioneered by former World Health Organization epidemiologist Gary Slutkin. The model uses a public-health lens and views violence as an epidemic. To fight the virus of violence and prevent the disease from spreading, the model recommends a three-step outreach program. The first step is to detect symptoms of the disease, followed by controlling and interrupting it. Lastly, the model calls for changing social norms around the disease, work that can take months or years.

This is precisely what credible messengers and violence interrupters do. They conduct block-by-block, on-the-ground outreach to dissuade at-risk young people and adults from partaking in criminal activity, particularly in the aftermath of a violent act, which can lead to further retaliatory violence. The model also requires that messengers and interrupters come from similar circumstances as those they are trying to reach. This is what distinguishes them from traditional counselors and lends their message greater credibility, so that their advice resonates with those who need it most.

Studies from cities across the United States show that, with proper funding and a trained, full-time and paid staff, the Cure Violence model works. This year, the City of Jackson has apportioned a small amount of money toward funding the Strong Arms of JXN, as the program continues to raise funds through other means, including philanthropic contributions, in order to build out its multifaceted programs.

The Strong Arms of JXN's goals include recruiting and training others—including women and young people—in the community to engage in violence-prevention work. It plans to train community members to canvas neighborhoods with high rates of gun violence in an effort to let them know about resources that exist and that there is a whole community that cares.

The Strong Arms of JXN wants to build out enrichment programs, too, from youth educational programs to job training, as well as workshops on conflict-resolution and harm-reduction skills, among others. The goal is to foster healthier communities and equip residents with the tools and resources to continue this work themselves.

On Feb. 9, the Strong Arms of JXN will hold a meet-and-greet event at Grove Park that will include a barbecue and documentary film screening. The event is part of the Strong Arms of JXN's plan to go into neighborhoods that experience a disproportionate amount of gun violence and introduce them to the work of credible messengers and violence interrupters.

The Grove Park event will feature a screening of the 2011 PBS and Frontline documentary film "The Interrupters," which follows a group of violence interrupters in Chicago, where the Cure Violence model was first piloted. A 2009 study on violence-interruption in seven Chicago neighborhoods showed that the program led to a 41-73% decrease in shootings there and a 100% reduction in retaliatory murders in five communities.

Located near the Shady Oaks and Bel Air neighborhoods, Grove Park is in a ZIP code that the initiative identified in its ongoing research as experiencing some of the highest homicide rates in the city between 2017 and 2018. The Strong arms of JXN hopes to eventually target the Washington Addition, Virden Addition and south Jackson as well.

The Strong Arms of JXN does not canvas neighborhoods or otherwise enter into neighborhoods without first establishing a relationship with a local leader in that community, who subsequently serves as liaison between the group and the rest of the community.

At Tuesday's meeting, Lumumba stressed the importance of getting the entire community's input and buy-in. That is why Strong Arms of JXN is holding the Grove Park event. "We are holding these events in ZIP codes that we are surveying to see if those are the appropriate places for us, and if they want us there," Lumumba said.

"So first of all, we've got to build the relationship and figure out, do y'all even want this? We ain't coming in to try to take over someone's spot," she added.