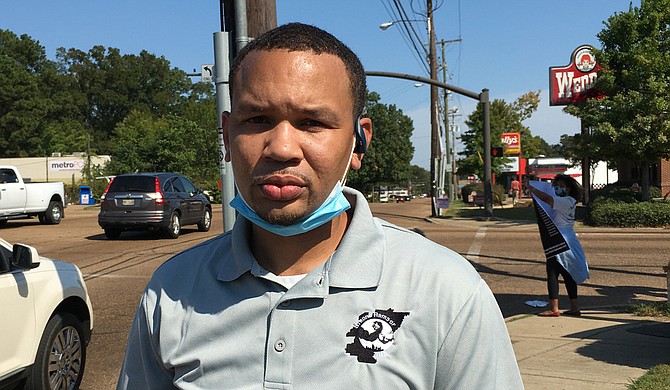 Strong Arms of Jackson Co-Director Terun Moore at the Unity in the Community Rally on Sunday, Oct. 4, 2020. Photo by Kayode Crown

Solutions to gun violence in Jackson include the community rallying around justice-system-involved young people with a high risk of re-offending, Strong Arms of Jackson Co-Directors Terun Moore and Benny Ivey said at a rally on Sunday.

The rally, at the corner of Northside Drive and Hanging Moss in Jackson, is the first in a planned series the leaders of Jackson’s first credible messenger/violence interrupters program are organizing to connect with Jackson communities, recruit members who will mentor at-risk young people and meet people who need help to steer them in the right direction.

Leaders of Strong Arms of Jackson have all been convicted of crimes in Mississippi and served time—which adds to their credibility now in trying to prevent and interrupt violence, based on the Cure Violence model with strong effectiveness in cities across the United States.

"Strong Arms of Jackson is partnering with other organizations in the community to host a series of rallies, and this is the first one—the Unity in the Community rally," Moore told the Jackson Free Press. "What we are talking about is bringing each other together in unity against gun violence in our communities."

Children at the Strong Arms of Jackson rally on Oct. 4, 2020, holding a sign showing a list of eight people lynched in Jackson from 1893 to 1912 and dozens of people murdered in the city this year. Photo by Kayode Crown

"This is part of our outreach and a way to recruit (people) to be part of the program (so) we can influence public change and behavior norms and, more importantly, the outcome of some of these black lives, young and women lost in our communities," he added.

At the core of research backing credible-messenger approaches is that policing is often not the solution for violence—and can, in fact, increase it. A 2016 BOTEC Analysis study of Jackson violence, funded by the Mississippi Legislature and ordered by then-Attorney General Jim Hood, discussed this effect, concluding in one of the resulting reports that putting a young person into a police car is one of the top precursors to that young person being more likely to commit worse crime later.

In Cure Violence-style programs, people who young people can identify with work to redirect their lives by sharing stories and motivation based on having been in similar circumstances. The concept, designed by Chicago epidemiologist Gary Slutkin, is based on the logic of how epidemics spread—violence is like a virus. Interrupting one act of violence can stop multiple retaliations and reverse the cycle, as Slutkin explained to the Jackson Free Press in earlier coverage.

"Right now, we are just looking for a building to start our workforce initiative," he said. "We are trying to take individuals who have been impacted by the (criminal justice) system, and train them in trade, or some form of work."

Moore said at the rally Sunday that those involved with gun violence should understand that they are also deciding to impact their life negatively.

Moore served time for gun violence he committed when he was a teenager. Another leader, John Knight, is a former gang leader and drug dealer in the Washington Addition, who tried to start a credible-messenger program on his own to help stop other young people from choosing a life of crime and violence.

In a profile of Knight's efforts in 2016, Slutkin told the Jackson Free Press that Knight would need community and financial assistance to make the program work effectively in Jackson. "God bless you," he said about Knight then. "I have a picture of (Knight) in my mind because we've run across wonderful, heroic, smart, accomplished, strategic, dedicated, caring people like him everywhere we go. It's wonderful."

But, Slutkin had a warning about Knight's efforts then: "There's more to do than you can do. There needs to be probably a few dozen of you. Two, it might be you should get a check for this. ... You can't depend on volunteers." Plus, the doctor warned, serious training was vital.

"Here you have a worker who is self-appointed trying to be helpful ... and out of the goodness of his heart or even experience, he may be effective," Slutkin said then of Knight. "It isn't going to be enough. It sounds like the city is missing the structure around him, and enough of him."

Now, due to Rukia Lumumba's efforts through the People's Advocacy Institute to create a credible-messengers program in Jackson, along with efforts by Moore, Ivey and Knight, there is a structure and organization.

‘If I Can Change, Anybody Can’

Benny Ivey, a former leader of the Simon City Royals in central Mississippi who served multiple times for violent and drug crimes, said those concerned about gun violence in the city should join with the organization to bring solutions.

"The bottom line is that the violence is not going to stop until we start addressing root problems," he said. "We have resources that we can bring to the communities, and want everybody to know what is going on and to link up with us."

The Strong Arms of Jackson co-director shared experience of being in prison for years, how he turned his life around, and what he believes in the cause of bad outcomes for many youths.

"Mostly, it's the I-am-a-product-of-my-environment mentality," Ivey said. "Look, I did 11 years in prison because I was a product of my environment, but once I realized that it was up to me to make that difference, everything changed.

"I have been clean now and out of prison for 10 years, and I have dedicated my life to this because if I can change, anybody can."

He added that Strong Arm of Jackson will start the workplace-development program later in October in which companies will employ returning citizens.

"We are working with some companies and contractors that will hire people coming home from prison, and we are going to pay their salaries for the first three months until they get acclimated into the job, and then the company will take over their salary," he said.

"But then we are going to work with the Henley-Young Juvenile Detention Center and the youth in the community so that we can mentor and pour love into these young people," he added.

Ivey said they are seeking others who have previous contact with the criminal-justice system but are now positive examples to join the credible-messengers program and to build trust with those at high risk of committing violence.

"If you know somebody that has been affected but has left that life and turned their life around and they want to work with us and do something about the community, they can contact us at Strong Arms of JXN on Facebook," he said. "They can contact us through peoplesadvocacyinstitute.com."