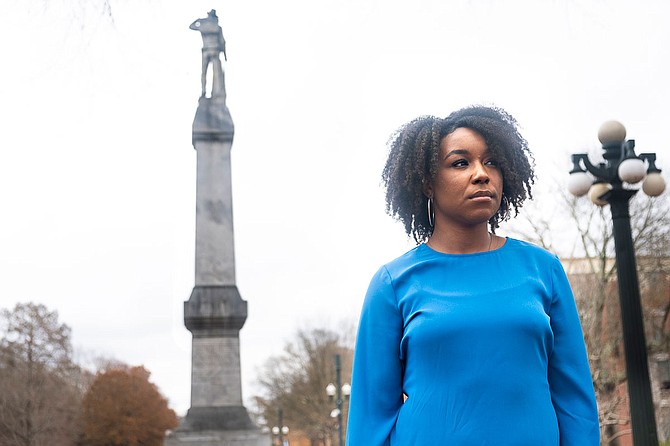 UM senior and Rhodes scholar Arielle Hudson calls the latest delay of moving the Confederate monument from the heart of the University of Mississippi campus a "setback." The Institutions of Higher Learning Board hurriedly pulled a final vote on the relocation on Thursday, Jan. 17. Photo by Seyma Bayram

The Confederate statue on the University of Mississippi's Oxford campus will stay put for now after the Institutions of Higher Learning Board tabled a motion to relocate it yesterday. That delays a process intended to move the memorial from the very center of the campus to the Confederate graveyard behind the Tad Smith Coliseum. The sudden juke from the IHL, during its regular meeting in Jackson, comes as yet another surprise to the faculty and student body, an experience they have grown familiar with over the last year.

"I'm disappointed, but not surprised," Croft Associate Professor of Anthropology Kate McGurn Centellas said in an interview. "This is a non-decision that ignores the careful, painstaking work our students, student government and faculty have devoted to moving the statue."

Part of that work, spearheaded by a dedicated group of Croft Institute for International Studies students, took place over the course of months, involving an arduous process of research and planning to build a case for the statue's relocation. Mississippi Code Section 55-15-81, adopted in 2013, specifically prohibits the removal of Confederate monuments. It is the interpretation of a single sentence allowing for the transfer of the monument to "a more suitable location" that legally justifies the statue's move to the graveyard.

Most galling to supporters of the statue's removal was the cavalier way IHL tabled the issue. IHL board member Tom Duff requested additional information on the implementation of recommendations in a 2017 report detailing the univeris around the campus. That report suggested contextualization plaques for campus buildings named after notorious segregationists such as James K. Vardaman, as well as the installation of markers for the Confederate dead as well as members of the United States Colored Troops from Lafayette County.

Duff's questions on the installation of those markers prompted the board to pull the issue from consideration prior to a vote. The board member's interjection into the issue came on the heels of a successful vote to rename the university's STEM building the Jim and Thomas Duff Center for Science and Technology Innovation. Duff, who together with his brother made a $26 million commitment to the university, did not vote on the building measure bearing his name.

The sudden move was dispiriting for UM senior and Rhodes scholar Arielle Hudson, who helped draft the resolution. "It's a setback," she told the Jackson Free Press. "It was surprising, especially being in the room, that there was no discussion, no overrule, that he was able to just table it alone."

Chancellor Glenn Boyce responded to the decision to pull the vote shortly after it happened. "We are committed to working with the board to accomplish our goal of relocating the monument," Boyce said. "Our governing body—the IHL board—has exclusive authority to relocate the statue."

Boyce previously served as commissioner of the IHL, retiring and later assisting in the search process for the UM chancellor who would eventually lead to his own hiring. Boyce's appointment worried many students and faculty alike that his tenure would lead to a reversal of the university's recent attempts to grapple with its Confederate past, as part of a broader strategy of cracking down on perceived "college liberalism."

At Thursday's meeting, Boyce reiterated that the Confederate graveyard was "a more suitable location" for the statue and restated the university's commitment to its relocation.

The process leading to the monument's movement has been long. The United Daughters of the Confederacy dedicated the statue in 1906 during the governorship of Vardaman, with the monument that now stands between the gates of the university and the pillars of the Lyceum firmly rooted in the "Lost Cause" ideology, UM's history department says. The Lost Cause is a narrative of historical revisionism that honors the Confederate South, denies the importance of slavery to the war and centers "white culture" as worthy of preservation—through segregation. It is the Lost Cause's portrayal of Reconstruction that most informs its racial politics, as "a failed experiment in racial equality that was vindictively foisted upon white southerners by a victorious Union."

"Nearly a year after our University's governing organizations—the ASB Senate, Faculty Senate, Staff Council and GSC—unanimously voted to relocate the monument, the IHL Board responded with woeful action," Mayfield wrote. The Mississippi Department of Archives and History approved the plan with a vote late last year on Dec. 6.

With the latest delay, the earliest the issue may come up for a vote will be the IHL's next regular board meeting on Feb. 20 if the chancellor chooses to resubmit the issue for consideration. Because of Duff's stated concerns, questions remain on what action the university must take before the statue can be moved.

One of the first bills introduced in the Mississippi Legislature this year is Senate Bill 2045, which requires "governmental entities that receive state funds and public colleges and universities to display the official state flag," throughout the work week. UM took down its state flag in 2015, amid protests over its prominent usage of the Confederate emblem.