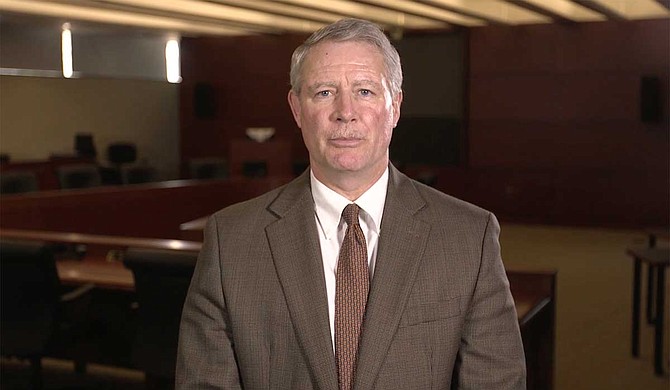 As new Chancellor Glenn Boyce settles into the Lyceum at the University of Mississippi, questions remain about his perspective on academic freedom. Photo courtesy Mississippi Institutions of Higher Learning

"You better watch your back. I'm coming for you," a voice growled through the receiver. The caller then hung up, leaving Dr. James Thomas alone in his University of Mississippi office with the anodyne tones of his phone's voicemail.

"You have eighty-nine unread messages," it said.

The man who promised to hunt Thomas down wasn't the only one to threaten his life, just the only one the FBI treated as a credible threat. The bureau traced the call back to Florida, then dropped the matter after a brief investigation. The emails came in at a quicker clip, hundreds by the end of the month.

"Dear fascist twink," began one, departing into a bizarre rant that referenced Thomas' "spindly quadroon fingers," his "gang of black thugs" and compared him to Trayvon Martin, the boy carrying only Skittles when a neighborhood watchman killed him in Florida in 2012. (Thomas is white.) "I hope someone tortures you to death," another email spat.

Eventually, Thomas stopped checking. A colleague swept the threats and bile into a separate folder, where they still remain.

The barrage of threats and insults started, as it often does, with a tweet. In the midst of the nationwide debate over Brett Kavanaugh's confirmation as a U.S. Supreme Court justice, the associate professor of sociology had taken to Twitter in late 2018 to  respond to calls for civility from NBC News television host Joe Scarborough.

"Don't just interrupt a senator's meal, y'all," Thomas tweeted. "Put your whole damn fingers in their salads. Take their apps and distribute them to the other diners. Bring boxes and take their food home with you on the way out. They don't deserve your civility."

The road from that post to the eruption of rage spilling out of Thomas' phone traveled from conservative social-media groups to Fox News, another horror story about radical professors and their corrupting influence on the youth of America.

But Thomas is adamant that the escalating focus on his tweet began with then-Ole Miss Chancellor Jeffrey Vitter on social media. "I condemn statements that encourage acts of aggression," Vitter wrote about Thomas' tweets.

Commenters pilloried Vitter and UM for not firing Thomas on the spot. Anonymous stalkers sent pictures of the Department of Sociology and Anthropology's doors, reminding the faculty inside that they waited and watched outside. The university assigned a security officer to the department, but the outrage melted away in time, likely to some new target of the campus-watching crowd's ire.

After IHL discussed him behind closed doors, Thomas' tenure was narrowly secured and that, it seemed, was that. But behind the scenes, sources describe displeasure at the highest levels with Vitter's non-punitive response to the situation, and it wasn't long after the NCAA had levied heavy penalties on the university in 2017.

In early 2019, Faculty Senate Chairman Brice Noonan met with a soft-spoken consultant from the Institutions of Higher Learning's Board of Trustees. The biology professor told this newspaper that the man, Glenn Boyce, fixated on the issue of "academic freedom," puzzling over the meaning of the principle that had so dominated the conversation on campus in the past year.

This issue defined Noonan's conversations with Boyce, he says, and it seemed likely to him that the troubles with J.T. Thomas were the subtext of the consultant's interest in the topic. Less than a year later, the IHL board plucked that consultant from retirement and dropped him into the Lyceum to serve as the next chancellor.

Glenn Boyce began his tenure as chancellor of the University of Mississippi on Sunday, Oct. 13, amid furor over his sudden transformation from paid consultant to the IHL board to its confirmed selection. Boyce replaced Interim Chancellor Larry Sparks, who stepped in last January after Jeffrey Vitter resigned. Vitter's own appointment had followed the controversial ousting of Dan Jones in 2015, whom many believe was too progressive for IHL's taste.

Boyce became commissioner of the IHL in April 2015, immediately after the board replaced Jones, but had retired from that post in June 2018.

The swift appointment of Boyce as chancellor follows months of concern over the process' transparency and legitimacy. In September, businessman Campbell McCool publicly relayed a rumor that the IHL Board intended to cut the search process short and unilaterally name a paid consultant chancellor without first consulting the committee. That rumor turned out to be exactly true.

Less than a month later, the website Mississippi Today reported a leak of the IHL board's shortlist, along with an endorsement of one of the initial applicants, former Rep. Chip Pickering, by Washington, D.C.-based lobbyist Trent Lott, an Ole Miss graduate. It published eight names, five drawn from the Campus Search Advisory Committee with the board's consultants suggesting the remaining three. The leak sent shockwaves through UM, which one faculty source characterized as "unprecedented, in my experience."

"Certainly the analysis of some of my colleagues and peers, almost immediately as the list was published, was that it was a smokescreen, as they put it, a poison pill," Centellas added. Other sources independently shared this characterization.

A number of people on the shortlist distanced themselves from the process after the leak, whatever its origins or purpose. University of Arizona President Robert Robbins told the Arizona Daily Star that he "shall not and would not seek this position," while Arkansas State University Chancellor Kelly Damphousse admitted to "exploring" the opportunity but then removing his name from consideration prior to interviewing, citing the counsel of family as he later confirmed to this newspaper.

The Faculty Senate of the University of Mississippi passed a resolution on Oct. 18 declaring "no confidence" in the Institutions of Higher Learning board's search process to find a replacement chancellor for the university, and no confidence in IHL itself "by reason of its conduct in connection with that search process."

Campus reaction to Boyce's hiring was immediate. On Friday, Oct. 4, a coalition of student activists met in front of The Inn at Ole Miss, where the announcement was due. The gathering quickly became a broad protest against the decision and the IHL's very existence.

Thomas and other academic sources told the Jackson Free Press that the danger to academic freedom was about more than Vitter's public condemnation. It was about what they saw as the total abandonment of faculty in the face of bilious outrage.

"If a complaint comes to the university president or chancellor about a professor," Thomas explained, referencing the American Association of University Professors' guidelines, "they should follow the chain of command from the provost down the department chair itself. That didn't happen here. The chancellor rushed to condemn the remarks without understanding their context."

The backlash rippled across the university, most notably in the Department of Sociology and Anthropology. Academic staff confided to the Jackson Free Press that they felt unsafe in the wake of the threats. Some found it difficult to remain on campus.

Moreover, Vitter's remarks about Thomas' tweets were hard for some to separate from his op-ed in the campus paper The Daily Mississippian, when he seemed to downplay results of the UM Race Diary Project, which chronicled microaggressions toward marginalized groups on campus.

"Since the data in the report are anonymized," Vitter wrote, "we have no way to reach out to those affected by these incidents."

Thomas was one of four co-authors on that project.

Vitter's focus on the anonymity of respondents was at odds with relatively basic principles of sociological research. The Institutional Review Board, the administrative body responsible for establishing ethical research standards for human subjects, maintains strict standards for protecting anonymity and confidentiality. The need for such bodies became evident after public exposure of horrific research of Nazi physicians, unethical human research during the Cold War and the Tuskegee experiments in Alabama.

Reaching out to investigate the microaggressions described in the study, as Vitter suggested, could have violated those standards. His op-ed left faculty members worried that administrators could target their academic pursuits as a result of their private speech.

Thomas, who now contributes columns to the Jackson Free Press, says he is far less concerned with threats to his person than the potential chilling effect his treatment by university leadership might have on other faculty members, especially those who have yet to secure tenure. He reiterated that university officials did not publicly defend his right to free speech, even in the face of so many death threats. Thomas did cite the support of the United Campus Workers of Mississippi, the first higher-education union in Mississippi, and PEN America, a free-speech advocacy group.

Dr. Jaime Harker, director of the Sarah Isom Center for Women and Gender Studies at UM, says the issue of academic freedom demands greater context. She believes the targeting of Thomas started with his involvement in the Race Diary Project, after which conservative media outlets started trawling his Twitter feed.

Harker believes such motivations are the norm. Ideological opposition to types of research, or more broadly, entire fields of inquiry often lie beneath outrage over off-hand comments and private speech, she says. The university has to do more to protect that freedom, Harker said.

"Academic freedom is fundamental to the creation of knowledge," she said. "You have to have the freedom to follow ideas wherever they lead, even if what you find is inconvenient to those in power."

Harker says the future of academic freedom at UM is in limbo, with no official communications on the issue since Glenn Boyce's installation. Speaking to Mississippi Today about Professor Thomas in the days following his appointment, Boyce insisted on his support for academic free speech, while broadly rejecting what he described as "manners that are disrespectful or meant to intimidate."

The Jackson Free Press asked James Thomas if he felt the Board of Trustees and its previous commissioner were genuine in their support for academic freedom. He laughed.

"I don't think the IHL even knows what academic freedom is," Thomas said.

UPDATE: When reached for comment, a spokesman for the University of Mississippi told the Jackson Free Press that "Chancellor Boyce is focused on getting up to speed on the affairs of the university and he is not entertaining any media requests at this time."

Email Jackson Free Press investigative fellow Nick Judin at [email protected] and follow him on Twitter at  @nickjudin. Read his document dump of years of IHL minutes last week at jfp.ms/documents and jfp.ms/dossier.