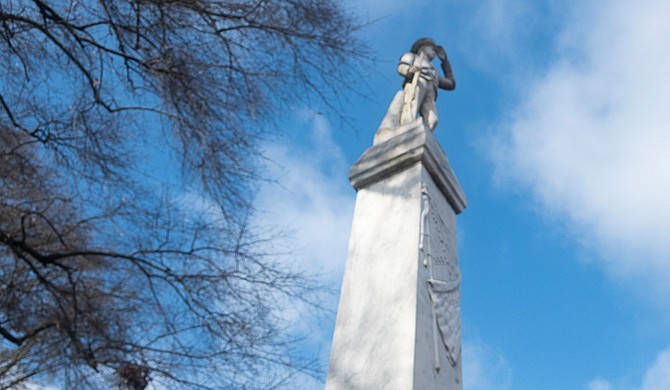 The Mississippi Institutions of Higher Learning voted to relocate the Confederate statue at the center of the University of Mississippi campus on June 18. The plans include action to “enhance” an area in the Confederate graveyard elsewhere on campus to include the statue. Photo by Seyma Bayram

The Confederate monument at the heart of the University of Mississippi campus will move to the Confederate graveyard elsewhere on campus, 114 years after its construction. The statue, dedicated to the “defense of Anglo-Saxon civilization,” honored Confederate soldiers for their military service during the Civil War and beyond. Gubernatorial candidate Charles Scott said in 1906 that “they “boldly, aggressively and intentionally overrode the letter of the law” during the violent reaction to Reconstruction, a period of Ku Klux Klan terrorism and lynchings against a newly freed black population across the former Confederacy.

This morning, the Mississippi Institutions of Higher Learning board voted to approve the move, previously delayed at the request of board member Tom Duff, who had asked for additional information on the contextualization process. 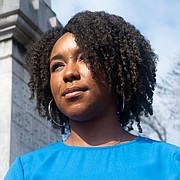 Rhodes Scholar and UM Graduate Arielle Hudson told the Jackson Free Press she was happy the move was finally proceeding, but does not want the new graveyard site to become a “shrine” to the Confederacy. Photo by Seyma Bayram

Arielle Hudson, recent graduate of the University of Mississippi and its first black woman Rhodes Scholar, helped write the resolution that led to the statue’s removal. Today, she expressed a cautious optimism about the decision in an interview with the Jackson Free Press. “I’m happy that it’s being relocated, (but) I’m a little hesitant about the additional plans that were presented to ensure that the relocation happens,” she said.

The board’s agenda for the move included a plan to create an “enhanced” viewing area for the statue as well as new markers for the graveyard, which currently has no marked graves, and is located behind the Tad Smith Coliseum. UM will add lighting, pathways and cameras to monitor the scene.

“The Confederate Monument will be accessible by a newly laid brick path surrounded by trees and enhanced with lighting. Included in these plans will be a new marker to recognize the men from Lafayette County who served in the Union Army as part of the United States Colored Troops during the Civil War. Within the walls of the cemetery, new headstones will be added to offer remembrance for the souls buried on the grounds along with a stone path to the existing marker in the cemetery,” the agenda reads. 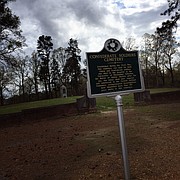 The Confederate graveyard on the UM campus, located behind the Tad Smith Coliseum, will be “enhanced” to serve as the new site of the monument. Photo by Donna Ladd

Hudson acknowledged that additional contextualization was always planned for the monument’s new site, but expressed unease at the plans. “I do not want it to become a shrine. I know that those are concerns that quite a few of my other co-authors as well as previous student leaders are having right now,” she told the Jackson Free Press.

The cost of the statue relocation is estimated at $1,150,000. Unspecified but private funding will pay for the move.

The IHL’s decision to move forward on the relocation, a decision the university reached last year through the leadership of a multi-ethnic coalition of students, follows nationwide protests over systemic racism and police brutality against African Americans.

Outrage from the protests extended to Confederate monuments nationwide, with activists and protesters engaged in ad-hoc “contextualization processes” of their own. On May 30, Zach Borenstein, a recent graduate of UM, was arrested after spraypainting “spiritual genocide” along the sides of the Confederate monument on the UM campus.