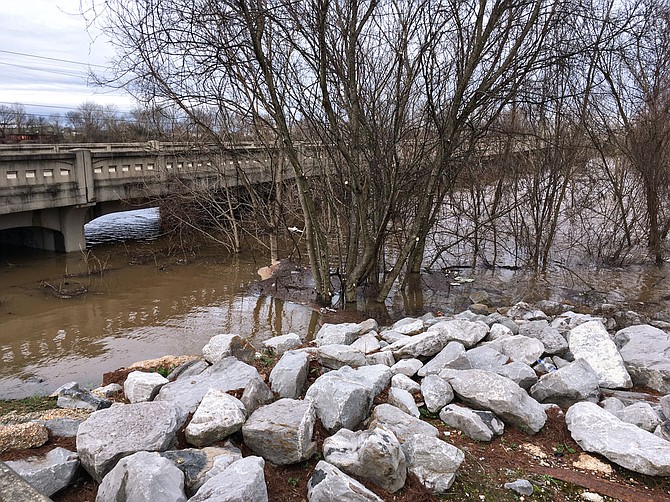 Waters are rising on the Pearl River, as was apparent the morning of Jan. 17 at this Old Brandon Road bridge in downtown Jackson. The National Weather Service predicts "moderate flooding" of the river through the weekend in the area. Photo by Kristin Brenemen

Flooding remains a risk in the Jackson metro area three days after Mayor Chokwe A. Lumumba declared an emergency, due to pending rainfall and high water levels in the Pearl River. The National Weather Services predicts "moderate flooding" through the weekend in the area.

Nicholas Fenner, a meteorologist at the National Weather Service in Jackson, told the Jackson Free Press Thursday that the greater Jackson area should expect to experience heavy rainfall from Friday evening into Saturday afternoon.

Earlier Thursday afternoon, the City of Jackson notified the public that the Martin Luther King Day Parade, which had been scheduled for Saturday, is postponed pending further notice due to flooding concerns..

A City spokeswoman stated late Thursday that the City did not have a weather update to provide.

The National Weather Service reports that, since Jan. 1, the Jackson metro area has had 11.36 inches of rainfall. That is significantly higher than the long-term average of 2.24 inches that the area normally experiences during the same period of the year.

Fenner confirmed that the area had had 33.02 inches of rain since Oct. 1, which is about double the amount of rain that the greater Jackson area has experienced in the past for the same period. "We do advise people to pay attention, especially if you live in an area that is flood prone," Fenner said.

Marty Pope, senior service hydrologist at the National Weather Service in Jackson, added that efforts are underway to hold excess water at the Ross R. Barnett Reservoir so as to decrease the likelihood of the Pearl River flooding. But the pending rainfall may complicate this effort.

Pope said that while there might be "small amounts of flash flooding," it would not be like "what we saw the other day."

On Tuesday, parts of Jackson experienced severe flooding due to high rainfall and high water levels in the Pearl River. Areas from Presidential Hills to south Jackson, especially in proximity to the city's creeks, were especially hard hit and led to residents being stranded inside the Camelot Apartments. Flooding also disrupted JATRAN bus service and caused students at Jim Hill High School to be held inside until water levels had subsided. Staff and students at Isable Elementary School were relocated to Blackburn Middle School, where they remained until it was safe to go home.

The City of Pearl shared a video of the rescue of a woman who had tried to drive around a barricade. Her car had fallen over into flood waters.

Residents should stay out of flood waters and not drive around barricades. Officials also warned people to avoid driving at night time.

Anyone who needs to be rescued from their homes or flooded areas should call 911. Those who observe any sewer overflows should call 311.

Follow City Reporter Seyma Bayram on Twitter @SeymaBayram0. Send story tips to [email protected]. Read more about flooding along the Pearl River and the pros and cons of proposed solutions at jacksonfreepress.com/pearlriver.