Jackson Under Flash Flood Emergency: ‘Not Out of the Woods,' Risks Still High 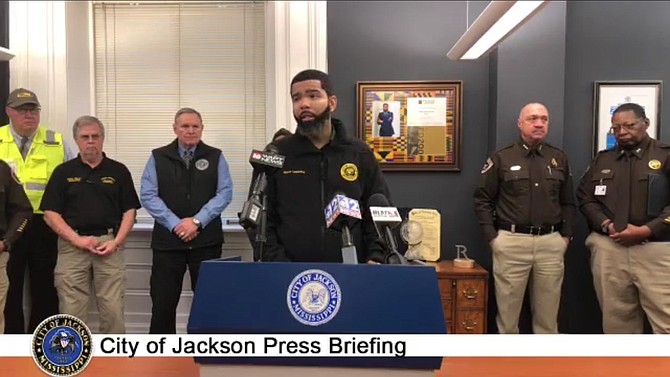 Mayor Chokwe A. Lumumba warned residents to steer clear of flood waters and avoid driving around or removing barricades as the city experiences severe flooding. The National Weather Service in Jackson declared a flash-flood emergency in the Jackson metro area, effective until 11:15 p.m., Jan. 14. Photo by Courtesy City of Jackson

The National Weather Service in Jackson declared a flash-flood emergency on Tuesday, Jan. 14, due to heavy rainfall and already-high water levels in the Pearl River. With more rain possibly on the way, the likelihood of flooding continues throughout central Mississippi, the National Weather Service reported Wednesday, especially in areas north of and along Interstate 20.

“This is an emergency,” Mayor Chokwe A. Lumumba said during a press conference Tuesday, four days after he had issued a civil emergency proclamation due to severe weather conditions and pending heavy rainfall.

Lumumba urged residents in the Jackson metro area to “not take this severe weather lightly.”

Officials warned residents to stay out of flood waters, to not remove or attempt to drive around barricades, and to avoid driving at night time. The City of Pearl tweeted a video of a woman who had to be rescued after unsuccessfully attempting to drive around a barricade on Tuesday, causing her car to topple over into deep flood waters.

Those who need to be rescued from their homes or other flooded areas should call 911, and anyone noticing any sewer overflows should report them to 311.

Jackson Public Works Director Bob Miller said at Tuesday's press conference that the City was still gathering data on water levels, but he noted that Belhaven and the areas around Jim Hill High School and Presidential Hills had been especially hard hit.

Jackson Public Schools issued a weather alert due to flooding in the vicinity of Jim Hill High School and Isable Elementary School yesterday. Students and staff from Isable were relocated to Blackburn Middle School, where they had to remain until conditions were safe for dismissal. Jim Hill also had to hold students and staff until flood waters receded.

Miller added that while some areas were draining, flood waters were continuing to rise in others.

“We’re not out of the woods, yet. We urge appropriate caution of all citizens,” he said.

Weather Nation reported that, by 4 p.m. on Tuesday, rain levels in Jackson had reached a new record at 3.70 inches.

This morning, the Hinds County Board of Supervisors approved an emergency declaration over concerns that the Pearl River would flood.

On Saturday, NWS had reported that the Pearl River at Jackson was forecast to crest at 35.5 feet—just 6 inches below a major flood stage.

A spokeswoman from NWS told the Jackson Free Press today that the Pearl River had not reached above 34 feet since 2014. "The last time we hit 35 feet was in 2003," she added.

With more rainfall expected this afternoon, evening, and tomorrow morning, residents and businesses living or working near the Pearl River, creeks, some parts of downtown Jackson, and northeast Jackson should make preparations for flooding, the NWS spokeswoman said.

Although excess rainwater from Lynch Creek had fallen back into the Pearl River, the river’s rising levels due to rainfall mean that Lynch Creek and other creeks are at risk of further flooding.

Concerned residents from the Belhaven and Fondren neighborhoods of Jackson posted comments and videos yesterday about flooding of Eubanks Creek. They warned of the time-consuming and costly clean-up efforts ahead. They also voiced frustrations over the fact that their previous efforts to address drainage issues at the narrow creek had come to a standstill.

JATRAN bus service was suspended Tuesday until flood waters receded. “We understand that there are citizens that depend on JATRAN, but these vehicles cannot safely travel through flood waters,” the mayor explained.

Hinds County Sheriff Lee Vance reiterated the National Weather Service’s warning to avoid driving at night. “I think as we get into the evening hours, once the sun sets, those particular issues will probably grow,” he said yesterday of potential flooding.

This National Weather Service tool will chart flooding and water levels of the Pearl River, as well as local creeks.