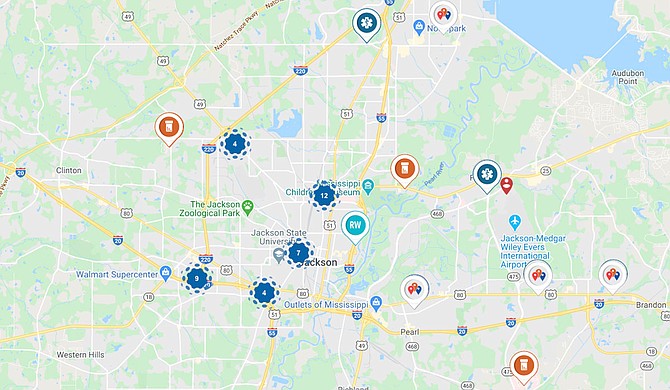 Screenshot of HIV/AIDS testing centers in Jackson from hiv.gov.

As Mississippi continues to experience high HIV/AIDS infection rates, a federal grant aims to support the state in fighting the epidemic. Earlier this week, the U.S. Department of Health and Human Services awarded Mississippi $2.5 million to focus on HIV/AIDS prevention and treatment as part of nation-wide efforts to curb new HIV infections in America by 90% in the next ten years.

Despite forming 38% of the total U.S. population, the South accounts for more than half of new HIV cases, a 2017 study from the Centers for Disease Control found. Mississippi currently has the 9th highest rate of new HIV infections. In 2016, the state experienced the 8th highest death rate due to AIDS. A recent study on HIV clustering in the state found that residents of the Delta, southern Mississippi, and the greater Jackson area are at especially high risk for contracting the disease.

In Mississippi, as with the rest of the country, men who have sex with men—especially black men—are at particularly high risk for the disease, as are bisexual men and drug users. Black women are also at high risk. Although Mississippi is 37% black, in 2014 black people represented 80% of new HIV diagnoses. The Mississippi State Department of Health states that young people, ages 20 to 29, represent the largest age group for new diagnoses.

Medical professionals and advocates attribute the high levels of HIV/AIDS in the South to a combination of factors, including systemic poverty, housing instability, lack of access to medical care, lack of adequate sex education, societal stigmas, homophobia and transphobia.

In 2017, Mississippi lawmakers ended free HIV/AIDS and other STD testing at all Mississippi State Department of Health clinics. At the time, the greater Jackson area had the 4th highest HIV diagnosis rate in the country, the CDC found.

Starting July 1, 2017, the State began to charge $25 for HIV/AIDS testing. The fee did not apply to people under the age of 19 or those that the state's disease investigation specialists had reached out to directly to get tested.

The $25 HIV/AIDS testing fee has since been eliminated, but advocates warned of the detrimental impact such a barrier would have on efforts to control the disease in the state, especially among low-income Mississippians.

As Mississippi struggles with high poverty rates—it is the poorest state in the nation—many Mississippians do not have access to robust medical care. Since 2013, Mississippi lawmakers have refused to expand the state's Medicaid program, rejecting more than $1 billion in federal money every year in the process. The Republican-controlled Legislature has not accepted the federal funds because they fall under former President Barack Obama's Affordable Care Act.

In addition to saving rural hospitals, Medicaid expansion could provide more Mississippians with access to HIV/AIDS treatment, experts say. In fact, a recent study found that HIV rates increased significantly in states that did not expand their Medicaid coverage.

A daily pill to prevent new infections from occurring now exists. Those at risk can take Pre-Exposure Prophylaxis, or PrEP, within 72 hours of potential exposure to reduce the chance of HIV transmission. People who are at risk of contracting the disease can also ingest the pill on an ongoing, daily basis to prevent infection.

Despite the availability of PrEP, however, in the South, many bisexual and gay men are not on the drug. This is either because they do not know about the drug or because they are unable to afford PrEP, NPR reports. Without health insurance, PrEP can cost $1,600 per month.

The $2,569,115 grant aims to expand access to HIV care, treatment, medication, and prevention in Mississippi. In addition to performing outreach and identifying those at greatest risk for infection, the grant will fund HIV testing and PrEP access for people who need it. People living with HIV will receive access to treatment, including viral suppression medication, and HIV transmission reduction measures.

Six health centers in Mississippi—in Biloxi, Canton, Clarksdale, Hattiesburg, Laurel and Mound Bayou—will benefit from $1,559,115 in award funds. These centers will focus primarily on prevention outreach, testing, and giving people access to PrEP. The other million will go towards supporting Mississippians who are HIV positive by connecting them to HIV treatment, medication and other supportive services, including job training.

Jacksonians seeking free and confidential HIV/AIDS testing can go to: