OPINION: Prison Reform and the State: The Impending Confrontation 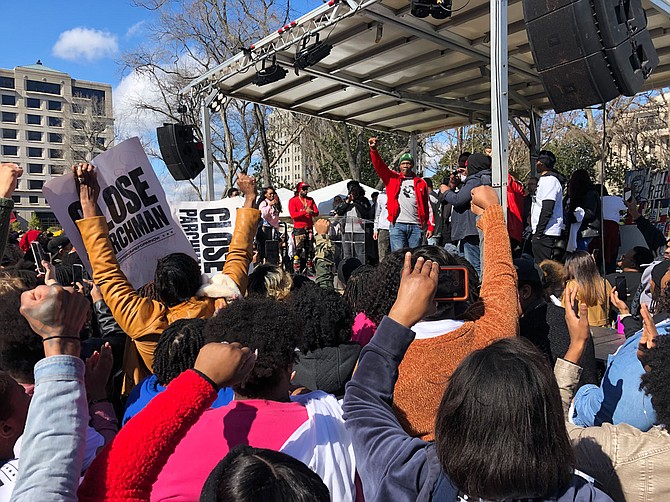 Columnist Adofo Minka argues that recent prison-reform rallies at the Mississippi Capitol were anything but radical and more "akin to being for a Middle Passage with more efficient plumbing." Photo by Seyma Bayram

The prison-reform rallies held at the Mississippi Capitol on Jan. 24 and Feb. 1, 2020, at the Governor's Mansion are evidence that dubious government-approved rallies don't just happen in "communist" countries. Neither were these rallies like older gatherings where white folks took picture postcards in front of hanging and smoldering black bodies with the aid of the redneck sheriff.

Speakers of a different curl pattern and hue marked these rallies.

They spoke of "our prisoners" and "our government" and wish to reform the conditions under how these bodies now swing as they proudly sing freedom songs. These theatrical performances wish for community control of the police sponsored by the state and ruling class, while the black police chief and black nationalist mayor collaborate with right-wing elements that criminalize toiling and poor blacks.

These recent rallies for reform were not designed to disturb anyone responsible for the maintenance of degradation. The state is not just the government as in the federal, state or municipality. It is the monopoly of the means of coercion: the prisons, police, the military and surveillance apparatus.

Official society doesn't control all coercion or organized violence. Outside of politicians, bankers and real-estate developers, there are a handful of people termed "criminals." Some will welcome the impending confrontation that the establishment will call anarchy after they have presided over the homelessness, hunger, brutality and death under a hierarchy of social classes that they call civilization.

These rallies were sponsored by sly foxes in sheep's clothing that support the state that, normatively, maintains suffering and death inside prisons. These activists speak about shutting down Parchman as if it is an aberration and anomaly within the Mississippi Department of Corrections. Did members of the Mississippi Prison Reform Coalition forget that rebellions occurred recently in the South Mississippi Correctional Institution and the Chickasaw County Regional Correctional Facility in response to oppressive conditions? Do they remember that in August 2018 at least 16 inmates lost their lives while in MDOC custody?

Mississippi Dreams Prison Family Support, which overlaps significantly with the Mississippi Prison Reform Coalition, desires to help relatives. Such efforts deserve support, however. The elites, both black and white, in the Republican and Democratic parties, do not approach incarceration differently. The abuse of MDOC inmates is continuous and unrelenting. The torment experienced by family members of the incarcerated is not intermittent.

We should recall the disaster that was the "mothers of the movement." They linked the "Black Lives Matter" slogan to Hillary Clinton's presidential campaign. Clinton previously called black male youth "super-predators" during her husband's reelection campaign. Why should bereaved families of the incarcerated rally around "our government" for reforms? Shouldn't they oppose state suppression and violence without stipulations?

Mayor Chokwe Antar Lumumba accepted campaign donations from a black-owned firm, M3A, that built three area jails or prisons. Should "we" rotate "our prisoners" to these facilities? Should grief-stricken families, concerned about their loved ones, identify with politics sponsored by black prison builders? It takes some real acting and misdirection to get us to accept such nonsense.

To insinuate that only Parchman is the problem while ignoring the customary hell that prisoners catch throughout MDOC is disingenuous. Those rallying emphasize Parchman since they cannot totally condemn MDOC—yet all prisoners want total freedom which few will admit.

Activists seem to infer that the cages in Parchman are too "inhumane," while others are benevolent. They propose shutting down Parchman and shuffling those incarcerated there to other facilities equally as dismal. What could a rally that stands for such propositions be but a circus?

Rally speakers made claims about a "revolutionary" mayor with a straight face. What revolutionary capitulates to cutthroat capitalists and aligns themselves with right-wing elements? Do these people make their living as comedians or actors? The performances of many activists involved in these rallies that intentionally ignored the mass suffering and death in MDOC as perennial are worthy of an academy award.

These government-sponsored activist rallies spoke of "our prisoners" and sang freedom songs. They didn't carry out disobedience obstructing policy making on a day when legislators were working. They didn't go over to Parchman and block the entry of more prisoners into their gates. They didn't occupy the office of the MDOC commissioner that was merely a stone's throw away from where they gathered. Instead, they opted to gather like they were at a picnic with a permit from the government.

Some at these rallies embraced rappers of the hip-hop community, like Jay-Z, who invest in companies that electronically monitor black and poor bodies with 21st-century slave shackles. Why accept the stamp of approval of such buffoons in the name of raising awareness? Whose sympathies were these individuals trying to win? It could not be those in society who await the impending confrontation with those who rule over common people.

These rappers were fraudulently embraced as both symbols of ordinary people in the street and black power in post-civil rights America. They didn't think anyone would notice that their empire state of mind is exactly the mentality that conquers Africans and is in harmony with dreamers who believe the lie that America is a meritocracy.

People who served terms in prison joined the show as theatrical props. They were so compelling that they did not apologize for victimizing their neighbors. Instead, they boasted about how many times they've been to prison and how long they have been affiliated with a gang. I guess so long as "our government" kills black and poor people with impunity, these individuals should not have to apologize, either.

There is nothing like a rally of actors (or activists) who are for prison reform. This is akin to being for a Middle Passage with more efficient plumbing. The stench from these rallies was produced largely by a gathering of pessimists and a few who really believe they are for liberation, while they fight implausibly the white racial state while they speak of "our government."

Far more than we realize, the essence of these rallies was deterrence. We know some came who are new to the movement for liberation and are well-meaning. But these rallies were meant to discourage those ordinary people, marginal black toilers, the unemployed, and the street force that have known brutality and prison and have found that it cannot be compromised with or reformed.

Reformists argue the prison system is broken, whether for racial disparities or public budgetary concerns. But it is not broken. It intentionally subordinates and degrades. How can historically oppressed people think otherwise unless they are bewildered or self-serving?

These actors who rallied have made their choice—they are with the government. They called it "our government." They called legislators "our legislators." These individuals are either employed by the state or volunteer for free.

Know their names. Observe their politics. They will speak against the next development in liberation whose soundtrack will not be black power synonymous with an empire state of mind. It will be power to the common people even after black people have ascended to government perches above society. How the "revolutionary mayor" and other "progressive" politicians respond to the impending confrontation will really be entertaining. How we respond to them might finally make Jackson, Miss., a radical city.