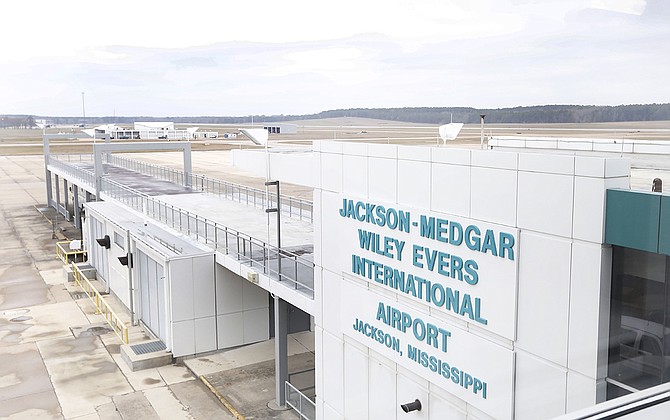 Jackson voters do not have a say in the affairs of the Jackson Medgar-Evers Wiley Airport, the 5th U.S. Circuit Court of Appeals ruled Aug. 21, 2019. Photo by Imani Khayyam

Capital-city residents do not have the right to govern the Jackson Medgar-Evers Wiley Airport or subpoena records from Mississippi legislators who voted to take over control of the facility, the 5th U.S. Circuit Court of Appeals ruled late last month.

The Aug. 21 decision came after the Jackson Municipal Airport Authority brought an equal-protection claim against the State of Mississippi, arguing that the 2016 decision to take control of the airport from a majority-black city and local government—despite the fact that all other municipalities in Mississippi retain control of their airports—constitutes racial discrimination against Jackson voters.

The plaintiffs claim that the law enacts "an illegal dilution of voting and other rights of the citizens of Jackson," the order shows. The 5th Circuit, however, ruled that citizen participation in the airport authority is not a legally protected interest, and therefore voters cannot sue for discrimination.

In 2016, Gov. Phil Bryant signed Senate Bill 2162, dubbed the "airport takeover" bill, which would replace the five-person, City-appointed airport commissioners with a nine-person board, only two of whom would be Jackson appointees. Because municipal airports provide millions of dollars in revenue for cities, the bill drew immediate criticism from the City of Jackson and its residents, who viewed the move as an attempt to divest vital economic resources away from majority-black, financially strapped Jackson and into affluent majority-white neighboring suburbs in Rankin and Madison counties. 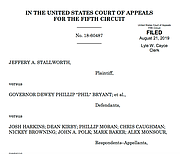 The Aug. 21 ruling reiterates the plaintiffs' race argument, outlining that the racial composition of Jackson is 79% black and 18% white, while the State of Mississippi is 37% black and 59% white. While the all-black, city-appointed board came close to reflecting the racial composition of Jackson, the plaintiffs argue that the takeover "demonstrates the City and its citizens and taxpayers have been invidiously excluded because of race, in whole or in part, from any control of its Airport by [S.B.] 2162."

Although the Mississippi Legislature has the highest percentage of black legislators than any other state, it still does not reflect the racial make-up of Jackson. Moreover, Rankin and Madison counties, which benefit economically from the bill, are 76% and 68% white, respectively.

Hoping to prove that racial discrimination motivated the decision to oust the City-appointed board, the plaintiffs requested subpoenas demanding access to communications between eight state Legislators "and any person, including members of the Mississippi Legislature and any governmenal agency, body or its representative(s)." State legislators, however, refused to hand over communications, citing legislative privilege. Nevertheless, the court stated that the plaintiffs lacked standing to request subpoenas on the basis of their claims.

"We may not have heard the last of this," Mississippi College School of Law professor Matt Steffey told the Jackson Free Press, noting that the plaintiffs are permitted to draft a different claim. He added that the ruling represents "uncharted territory."

The legislators claimed that the plaintiffs failed to demonstrate how citizen participation in airport affairs is a "legally protected interest," court documents show.

"[T]he individual plaintiffs lack standing to bring their equal protection claim because they have failed to demonstrate injury to a legally protected interest," the court ruled. " ... That Jackson 'has been singled out by [S.B.] 2162' does not establish that a legally protected interest of the individual plaintiffs has been violated. Cities are creatures of states, and though their authority to do so is not unlimited, states may, under some circumstances, treat cities differently."

The ruling has significant implications, Steffey said, as it suggests that even if race motivated the Legislature's decision, Jackson voters are not allowed to complain about it because voter say in airport affairs is not a legally protected interest.

"That's a powerful statement," he said.