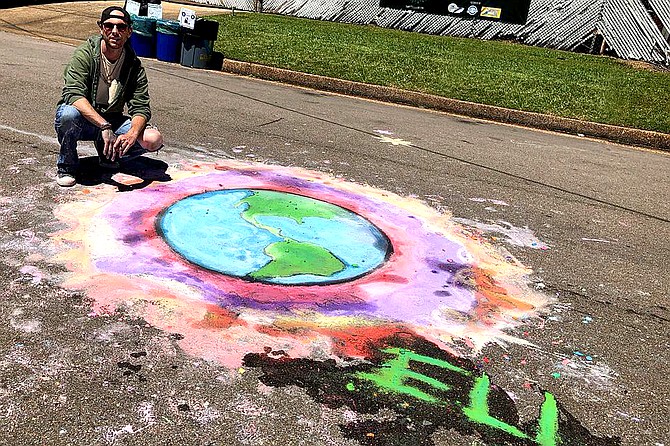 Eli Childers has created chalk art for businesses and events such as Vibe Fest in April. Photo courtesy Eli Childers

While Eli Childers has been busy around Jackson painting murals for places like Coffee Prose, he has also been using another medium: chalk. "I love chalk art because it's temporary, much like life is. Life is here one day, and it's gone tomorrow, and there's so much beauty in life itself," he says.

He will bring his love of chalk art to the city with the inaugural Jackson Chalk Walk Festival on Thursday, Oct. 17.

It started when he got the idea to do chalk art in places throughout the city. To date, he has done art for Coffee Prose, Keifer's and other businesses, and at events such as the True Local Market at Cultivation Food Hall. Most recently, he did a chalk drawing of a prehistoric whale in front of the Mississippi Museum of Natural Science. A model of the whale, whose species is Zygorhiza kochi, is at the museum.

"I just had the inspiration to do chalk throughout the city just to be something positive, to do positive images and everywhere, just to bring a little bit of hope and enjoy and beauty to anybody that saw it throughout Jackson," he says.

He discovered that he had a passion for doing chalk art, so he got in touch with Janet Scott at the Greater Jackson Arts Council, and David Lewis, the City of Jackson's deputy director of cultural services, about hosting a chalk art festival.

The festival will start at the Mississippi Museum of Art. Chalk signs will direct visitors to the pathway, which will surround the block around MMA, Childers says. Due to the space at Thalia Mara Hall, most of the art will be in front of the building. At press time, Childers and the other planners confirmed artists such as Olivia McDonald, Dillon Williams, Kayla MacGown, Margaret Sullivan, Azha Sanders, Fredrick B. Roseman, Mary Vavra Curran, Chris Mitchell and Beverleigh Nelson for the event. The number may grow to about 15, Childers says.

Artists from local nonprofit Very Special Arts, which does art classes with special-needs adults, will also participate in the event.

The chalk festival coincides with the Mississippi Museum of Art Third Thursday event. The museum will have a costume contest, pumpkin painting and an Inktober sketch-off competition. The festival will have food trucks lining the chalk walk path. Childers is hoping the event will culminate with a DJ set on the balcony in front of the Birdcap mural at the Arts Center of Mississippi.