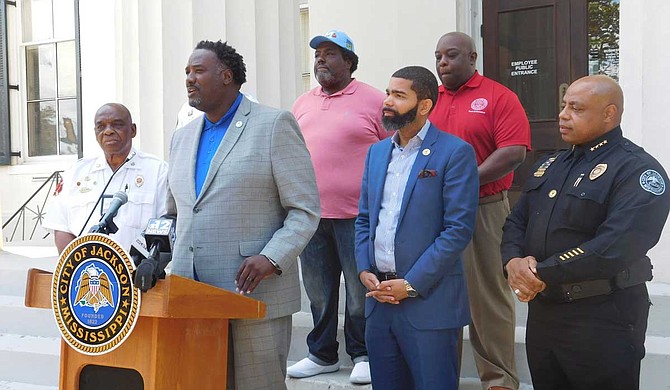 Parks and Recreation Director Ison B. Harris Jr. talks about the Peace in the Street 3- on-3 basketball tournament on Aug. 17 at a July 23 press conference outside Jackson City Hall. Photo by Josh Wright

"Now I know that I don't look like much now, but I could play a little bit back in the day, right?" Mayor Chokwe A. Lumumba asked his colleagues. He looked back for affirmation, but was met with silence by Jackson Police Chief James Davis, Parks and Recreation Director Ison Harris Jr. and Fire Chief Willie Owens.

"I don't how many amens I got at my back, but we're excited about this event," he added.

Lumumba announced that the City of Jackson will host a Peace in the Street 3-on-3 basketball tournament to help combat violence in the community at a July 23 press conference outside city hall. Jackson youth and adults can come out and participate in the tournament, he said.

"We see this basketball tournament as a way of engaging and interacting with our young people on a positive note, so that we give them some extracurricular activities to take place," he said. "(But) we have a larger and more important message in mind, and that message is peace in the streets, unity in the community."

The tournament also serves as a way to honor the memory of his father, former Mayor Chokwe Lumumba, a committed community organizer who worked with the Jackson Panthers basketball program, the current mayor said.

"What he understood is what we understand at this moment. It is a lot easier telling young people what to do than simply telling them what not to do," Lumumba said.

The tournament will take place on Aug. 17 and will start as early as 8 a.m. Organizers will set up courts on Pascagoula Street and at the intersection of Congress Street and State Street.

"Our young people division is from (ages) 8 to 17, and we'll have several courts named for those age groups, and then we have three older divisions for our older people that don't want to give up on the dream of playing basketball," Harris, director of parks and recreation, said, glancing briefly at Lumumba.

Radio stations WJMI, Kixie 107 and 97.7 to partner with the event andl broadcast the tournament and provide music. Rappers Reese and Bigalow will put on a mini concert. The first 65 teams of young people who register for the event will get in free with sponsors covering them, Harris said.

"We're blocking off the streets," Lumumba said. "We want people to feel that everyone is welcome. We didn't want to just choose one facility. We could have done it in a nice gym, but we want this to be open to the community, and we want everyone to feel that they have the opportunity to participate."

JPD Chief Davis said "peace in the street, unity in the community" is his job as he works to keep Jackson safe.

"I encourage all of the police officers and anybody in this city that if you're mentoring to some of the kids in our community, just reach out, bring them out here, and you come out and play yourself," Davis said.

Chief Owens of the Jackson Fire Department said he is overjoyed to be a part of this event because he believes there are a lot of people in the fire department who would be happy to participate.

"We always come to win whenever we come, whether it's basketball, kickball or whatever. I want to challenge all those young people who think that they can come out and win and beat some basketball players. You're going to find out that we do have some professional players on the Jackson Fire Department," Owens said.

Lumumba challenged residents to put signs in their yard that say "peace in the streets, unity in the community" as a way to "embrace the mantra, embrace the culture and continue to be a community that watches one another's back," he said.

"We will have AMR down here just in case some of these guys are trying to turn back the clock, and the clock is not going backwards," he said of an ambulance provider.