EDITOR'S NOTE: A Woman’s Life in the Mississippi Minefield 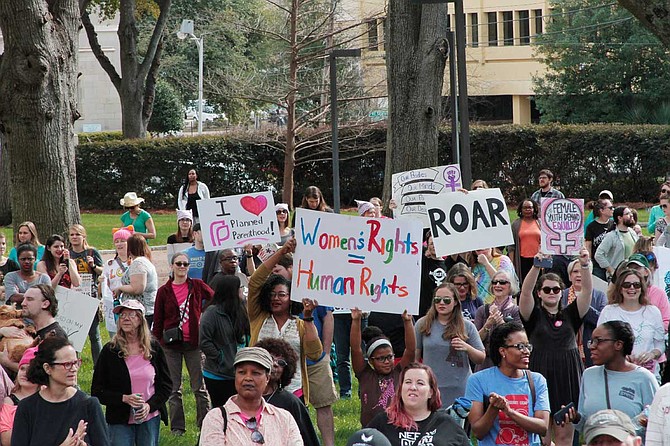 More women are speaking out in Mississippi than ever before. But many men still do not welcome being challenged by women here. This must change. Photo by Arielle Dreher.

It's tough being a woman in Mississippi. In fact, it's probably the most difficult state for women to speak our minds and publicly engage on political and policy fronts, and we routinely watch our basic rights come under attack, often without any of us invited to the table. And tragically, that's not just because it's a conservative state with a Republican supermajority driving many decisions and debate.

Democratic men sell us up the river, too. Not all of them, but too many help make women's quality of life and engagement in Mississippi precarious and often infuriating. We navigate perpetual minefields, knowing that stating even the slightest disagreement on a candidate or policy can get a dump truck of proverbial hot  asphalt dumped on our heads.

After last summer's Democratic primary for Senate, I said on Facebook that I believed a male candidate should've focused his campaign more on Jackson, especially women of color here, several of whom had told me that. Hell rained down on me for days from some Democrats with the worst from men, but women, too. How dare I?

Then last week, the presumed Democratic nominee for lieutenant governor voted for the "heartbeat bill," a thinly disguised route to make abortion illegal in the state, a bill on par with the Personhood amendment that this state defeated at the polls in 2011. Were it to become law, and affirmed by courts, even young teens raped by their fathers would be forced to have the babies.

I can respect that someone is morally against abortion. It's their choice. But the government regulating women's reproductive decisions is beyond the pale. And Hughes didn't just stop at the vote; he followed it up by telling angry women that, strategically, he and other white male Democrats needed to vote against abortion in order to both get elected and help the House keep white representatives. Sigh.

This isn't a new political strategy for men in Mississippi. I've watched, and called out, other Democratic men for voting for crazy abortion bills for 16 years. Women should not be pawns in a game we cannot win—and especially after the defining statewide vote against Personhood. But because of the blinders about both women's rights and our right to talk back (and be heard), these men keep repeating the same lunacy.

Then somehow women are always to blame when we call it out. After I criticized Hughes' vote on Twitter last week, a local political caviler came after me personally, saying I am a "miserable obsessive lady" with a "girl crush" on Hughes. (That's not what that means.) He then posted all over the place that the GOP is paying me off.

Now, no one with a sliver of brain would believe that libel—the Mississippi GOP even blocks me on Twitter—but what is stunning is how stupidly many men of all stripes here react to women who, gasp, disagree with them, whether publicly or even in professional settings.

Simply stating our opinions, whether in a milquetoast fashion or a more assertive way, gets us called every name in the book—miserable, obsessive, narcissistic, "no class," pious, sluts, c*nts—too often with other men cheering them on.

Those examples are a minute percentage of the names I've been called publicly for doing my job and expressing my political opinions since this paper launched in 2002. In 2017, I was called a "miserable argumentative ass" on Facebook by a Democratic operative, who distributes "oppo" on clients' opponents, because I made a mild comment on a third party's page about supporting Chokwe A. Lumumba for mayor.

I've had local Democratic men scold me in email for being "too mean" to someone who was hounding me online. One thing you learn fast here is that when a woman responds to bullying, abuse and lies about us, we're suddenly proclaimed to be in a "two-sided" battle, and we're both to blame—another way to discredit women.

That's not how that works, guys.

They also attack women's bodies from butt to breasts; a blogger who draws bipartisan chuckles from men and political ads from both parties proclaimed once that a prominent woman defense attorney's breast implants should explode because she represented someone he disliked. Meantime, his anonymous boys' club chuckled at her small ta-tas. Either way, she was a piece of meat that leering men wanted to rip apart.

All she did was her damn job.

The worst part is how many other "good" men seem to laugh it away or think we deserve it for being sassy, and how too few of our genteel southern gentlemen go get their boy who's losing his sexist mind. Times like these remind women just how tough it is for us in Mississippi to speak our minds—and women of various parties and backgrounds know it. Many women open up to me about the silencing—when there isn't a man within earshot who might back the truck up and take yet another dump on us just for talking about the problem. I have tough skin (from practice) and can handle the insults, although I shouldn't have to. I speak up about these stunts because they are a silencing tradition we need to blow up for future generations of our state's women.

During campaigns, not only are we supposed to stay sweet and compliant to what we're told needs to happen, but we often have to watch our gender once again be a political pawn in the game, which men on both sides run. And they don't ask us what we think before making decisions that can have devastating effects on our lives.

Post Trump and #metoo, women are forcing national conversations about how women are personally disparaged and silenced, labelled as "unlikeable" for being assertive and good at jobs, and slammed for not being nurturing and compliant enough, often by people with something to hide. Mississippi, starting with its male politicians, must get the memo that women are equal to men here, too, even if it makes them uncomfortable. They need to raise their own bar on how they engage with women, handle our feedback, characterize us, question anti-women rants and confront the sexism among their brothers.

If not, women will continue to be a vital part of Mississippi's brain drain because, seriously, why would women choose to live under a perpetual hammer, ready to drop on us if we say something a man doesn't care to hear? It's simply unacceptable.