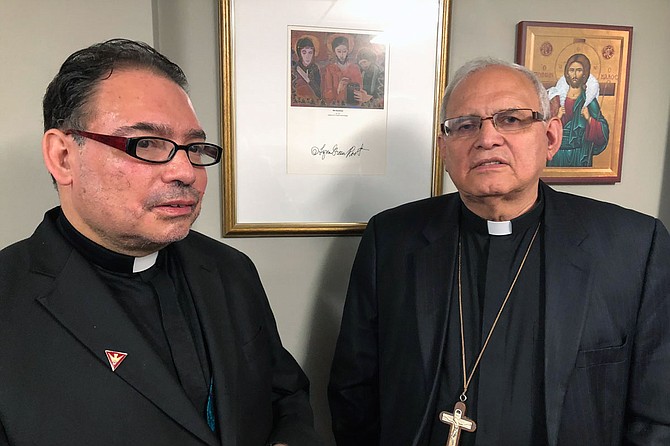 Ramazzini castigated Christians who take a hardline position against immigrant populations. “I will use one single word: coherence. The faith that you are practicing has to be the same one you’re preaching.” It would be better, the cardinal suggested through a translator, for such Christians to declare themselves atheists than to remain Christians “not able to see Christ in their neighbor.”

The immigrant community in Mississippi is struggling to recover from the largest-ever deportation raid in a single state. ICE stormed the floors of seven different food processing plants in early August, rounding up nearly 700 individuals. Of those, around 300 remain in state custody, and federal authorities charged only 119 with crimes. ICE released some of those taken during the raids on humanitarian grounds, many because their children had no other caretakers. The agency gave released workers ankle monitors, leaving them temporarily free but unable to work, Rev. Odel Medina, pastor of St. Anne’s Catholic Church in Carthage, said.

The raids took place on the first day of school for many in the Jackson area, leaving children adrift and school administrators scrambling to coordinate their shelter and transportation. Coverage of the event displayed the abject chaos of the raids, including the permanent disruption of life for the plant’s documented employees swept up with the rest. The manifest trauma visible in children caught between the law and their families is an ongoing concern for other agencies, such as Mississippi’s Department of Child Protection Services. But U.S. immigration agencies have long used family separation as a deliberate strategy, far predating the nation’s contemporary crackdown on immigrant populations. Those families August’s raids have not permanently separated now live in a state of surveillance, awaiting the slow process of trial, and potentially internment and deportation. As is usually the case, industries that profit from undocumented labor face no significant consequences; workers bear the brunt of the punishment.

The role of the Catholic Church and attendant organizations like Catholic Extension is to support the immigrants economically as well as spiritually, Mena said. That support often addresses basic needs, such as food, transport and childcare, that detention sweeps disrupt. Politically, as with Medina’s testimony to the Committee on Homeland Security, those organizations are pushing for widespread reform to the United States’ immigration system. They call for recognition of migrant laborers’ contribution to the nation and a pathway for those individuals to remain in the country without fear of having their families split apart.

“For me, the whole question of immigration, what it shows me is that there is a profound crisis of Christianity in the United States,” Ramazzini said. A reporter in the press pool asked Ramazzini if there wasn’t a legal obligation to remove undocumented workers from the country. There is a difference, Ramazzini responded, between what is legal, and what is just.