EDITOR'S NOTE: Be Clear; Trump (and Clinton) Caused Own Impeachment 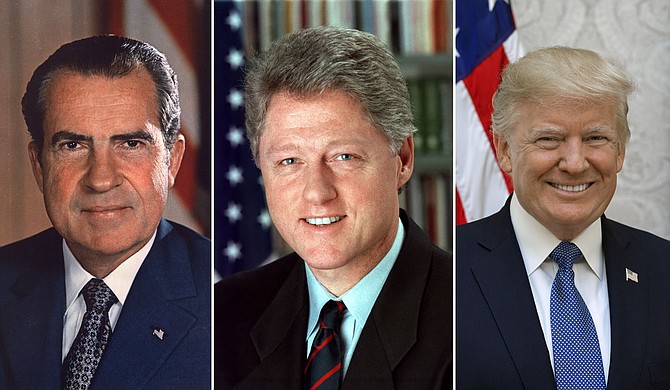 Impeachment proceedings are serious affairs and serve a vital purpose, regardless of party. It’s hypocrisy to only hold the “other” party accountable. Photo courtesy White House

I'm old enough to remember three presidential impeachment lead-ups and how fans of those presidents and their parties reacted to them. When the U.S. House started an impeachment inquiry into the corrupt, racist and sneaky Richard "I Am Not a Crook" Nixon, most around me in Neshoba County kept saying: "Everyone does it. He just got caught."

Of course, "everyone" doesn't greenlight break-ins at the headquarters of the opposing political party to find inside information to use in campaigns. And "everyone" doesn't lie, obstruct and cover for the burglars and conspirators. It was an open-and-shut case—which clearly Nixon knew himself by the time he resigned before the House voted on the impeachment articles.

My second impeachment cycle was, of course, Bill Clinton. I admit to voting for Clinton, and I was even there in 1992 as a reporter in Madison Square Garden when Democrats nominated him and Al Gore the first time. Still, I was uncomfortable with the seemingly credible stories that dribbled out alleging sexual harassment against Paula Jones and others. In some ways, I held my nose and voted for Clinton because the alternative was so bad.

In office, Clinton went way too far with compromises with Republicans who were pushing for extreme welfare reform and draconian incarceration laws for adults and teenagers in 1994 (which Bernie Sanders voted for), as well as horrific zero-tolerance policies for minors. By the time he was running for re-election in 1996, neoconservatives were pushing the fake "super-predator" myth about black boys into national headlines as an excuse for locking up more black people of all ages, and both Bill and Hillary bought into the supposed explosion of predators by 2000, even as crime was dropping dramatically.

I wasn't pleased with the Clintons' efforts to appease white Americans' fear of black crime, but it was the Monica Lewinsky affair that really first made me turn on blind partisanship. And, no, he wasn't "impeached for an affair," as many like to say. He was impeached for lies and obstruction that came after sexual acts with a barely-legal young woman who worked for him and in the workplace we call the Oval Office. This was textbook sexual harassment even if she consented. He then lied about it, even referring to his conquest as "that woman."

I looked at the full situation and made a decision that wasn't popular with many of my friends—I supported Clinton's impeachment. These constitutional safeguards are there for a reason, and lies and obstruction by a U.S. president, even one you like, is not acceptable. When Democrats yelled at me, I always answered that I wasn't blinded by partisanship, that I asked myself a question when people I had voted for were accused of something: How would I react if it was an official I didn't like? If I didn't apply the same standard to someone I had supported, then I was a hypocrite.

Put simply: It's hypocrisy to shrug at what Clinton did and said and then turn around and blast Trump for his disgusting comments about grabbing women's genitals at will. That's blind partisanship.

Still, impeachment is hell for a the country—but the reasons impeachment proceedings begin are very serious. They are the kinds of violations of public trust than set dangerous precedents for the future.

As for Trump, please don't tell me that a man who was such a brute to fellow Republicans about their families in primary debates, or who mocked reporters with disabilities at rallies, or who bilked students who bought into his Trump University scam, or who tried to block black tenants from his rental buildings, was not headed for impeachment for something. He has no filters, nor any apparent moral compass.

Christians who think he is serving their moral interests are doing what my progressive friends were doing when defending Clinton—acting out of self-interest because he promised something they wanted, regardless of how he hurt people otherwise.

The House impeached Trump because he openly and admittedly sold out the United States to a foreign country to hurt a political opponent, dangling missiles in exchange for the "oppo" dirt. That is similar to what Nixon did, but more treasony.

The fact that no Republican in Congress has the balls to stand up to this serious transgression is terrifying for our country—and another difference from Nixon. And the fact that Trump supporters excuse anything he does because he makes public racism OK again or pretends to be a bastion of Christian love is absurd and treacherous for our democracy.

Trump wants to be a dictator. He sells our nation out to dictators like Vladimir Putin, even as he tries to manipulate nations like Ukraine on his friend Russia's behalf. He fights sanctions that Congress passes against Russia. He defends white supremacists and pretends there are "good people on both sides" of racist attacks. He is making the nation hateful again.

When I was growing up in Neshoba County and learned about the full horrors that racism reaped right in my town, I started to wonder what it would have been like to live through such an oppressive period, existing in fear of what would happen if you spoke out. Today, Trump has taken us backward closer to that time, and it is not an era we can afford to replicate.

Democrats face a quagmire now over Trump's impeachment. Sure, it's divisive, but Trump created that vivisection with his leering hatred of anyone who disagrees with or challenges him. Like with Nixon and Clinton, impeachment is a national crisis of his own making. The nation owes it to future generations to hold him accountable, just as it did Nixon and Clinton.

Donna Ladd is editor-in-chief and CEO of the Jackson Free Press.