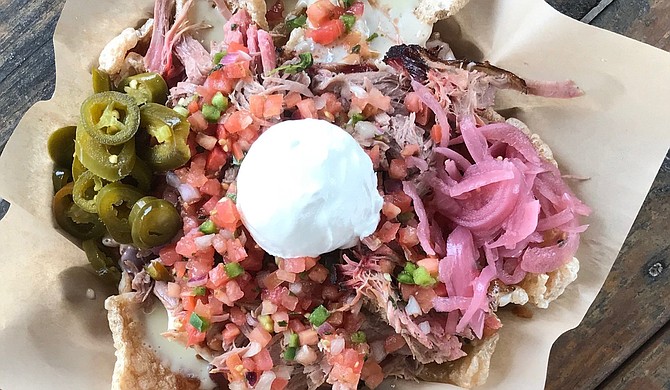 The Food Network recently featured Fondren barbecue restaurant The Pig & Pint (3139 N. State St.) as part of its "50 States of Nachos," which highlighted unique nacho dishes from every state.

The Pig & Pint made the list for its pork rind nachos, which are made with pulled pork, smoked chicken or brisket on rinds topped with queso, smokehouse beans, pickled onions, pico de gallo, jalapenos, sour cream and the restaurant's Mississippi sweet barbecue sauce.

"Being a gastro pub, we knew that we needed to come up with some great barbecue nachos," Grant Hutchinson, executive chef and co-owner of The Pig & Pint, told the Jackson Free Press. "We started trying different ingredients, mixing and matching to find what best complemented the barbecue and wouldn't get covered up by other flavors because we want people to taste the meat. We saw some rinds sitting there one day and decided to experiment, and it turned out to be the perfect chip to go with nachos, having a perfect mix of sweet and savory with that salty bacon flavor." 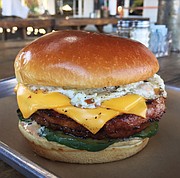 Food Network also featured The Pig & Pint on a similar list of breakfast sandwiches from all 50 states last year. The restaurant's entry was its fried bologna sandwich, which is made of pork smoked in-house and fried on a griddle. The sandwich is served on a brioche bun with comeback sauce, butter pickles, American cheese and an over-easy fried egg. Photo courtesy The Pig & Pint

Food Network also featured The Pig & Pint on a similar list of breakfast sandwiches from all 50 states last year. The restaurant's entry was its fried bologna sandwich, which is made of pork smoked in-house and fried on a griddle. The sandwich is served on a brioche bun with comeback sauce, butter pickles, American cheese and an over-easy fried egg.

"The bologna sandwich is my personal favorite and a big nostalgia thing for me," Hutchinson said. "I grew up eating them all the time but never had the experience of making one for myself. Then, when I tried making one of my own here in the restaurant, everyone agreed that it had to go on the menu.

"Every day we're putting out our best effort here at Pig & Pint to make the best food, so for people to recognize it and give us these kinds of honors is the best thing, and we plan to continue doing what we love to do."

Northpark Mall will host the Glow in the 'Park 5K on Friday, Nov. 16, as part of the mall's grand opening weekend celebrating the completion of its large-scale renovations, which began early this year.

Glow in the 'Park will benefit Adam Malone, a Ridgeland teenager with Duchenne muscular dystrophy, which is a severe form of the disease and affects one in 5,000 males.

Malone is the founder of Adam's Project, which constructed an inclusive playground at Freedom Ridge Park in Ridgeland for children ages 5 to 12, including those with physical disabilities, in 2012. He is a senior at Jackson Preparatory School and films high-school football games as part of the school's broadcast club. He is also active in the theater department and won an award in 2017 for his performance in a one-act play competition.

Malone and his family suffered a house fire in January 2017. They rebuilt the house, but the backyard is inaccessible to Malone, who is confined to a wheelchair. Sponsorships from Glow in the 'Park will help the family complete its backyard renovation.

The race will begin at 7 p.m. by the Northpark Mall main entrance between Dillard's and Belk, and will finish near the new Eatery cafe. Race participants ages 21 and older will receive one free beer ticket at the finish line. The event will also feature post-race refreshments, door prizes, giveaways and discounts.

The fastest overall male and female runners will receive cash prizes. Prizes are also available by age groups for the running and walking categories. A release from Northpark recommends that participants wear reflective gear, and states that the most decorated glow runner will receive a prize. The evening will conclude with Northpark's "Silent Glow Disco" after-party, featuring DJ 51-50.

Northpark is also encouraging schools to participate and is offering a $500 cash prize for the school with the most students registered to race. The mall will announce the winning school during the evening awards ceremony. An adult must accompany race participants ages 10 and under.

Gold Coast is a bar that takes inspiration from Prohibition-era nightlife along the Pearl River, an area once known as the "Gold Coast of Mississippi." The bar will feature wine, beer and a menu of original cocktails named for notorious Mississippi nightclubs.

il Lupo is the creation of husband-and-wife team Ana Lampton and Taylor Triplett together with Tyler Emerson, who formerly worked for 929 Coffee Bar in Starkville and Deep South Pops in Jackson. The shop uses North Carolina's Counter Culture Coffee as its roaster and will serve espresso- and milk-based drinks, teas, and seasonal drip and pour-over coffees.

Cultivation Food Hall is a joint development with New Orleans-based St. Roch Market, which opened in 2014. The food hall is an 8,000-square-foot space on the ground floor of the BankPlus Building, and will have both indoor and outdoor seating and a dedicated event space. For more information, visit cultivationfoodhall.com.

Derek Eady, an economic development specialist with the SBA's Gulfport branch, told the Jackson Free Press that McMahon's nationwide tour is focused on listening to small-business owners; educating them about SBA's services for access to capital, mentoring services and federal contracting; advocating for local entrepreneurs; and driving economic growth for small businesses.

The Old Capitol Inn is a recipient of the SBA 504 Loan program, which provides selected small-business owners with fixed-rate financing in order to expand or modernize their businesses.

"(McMahon's) Ignite Tour is about raising awareness of SBA programs and services, spotlighting businesses that have benefited from them and receiving feedback from local business owners on the challenges of entrepreneurship," Eady says.