Jackson City Council: 'No Confidence’ in Cindy Hyde-Smith as Senator 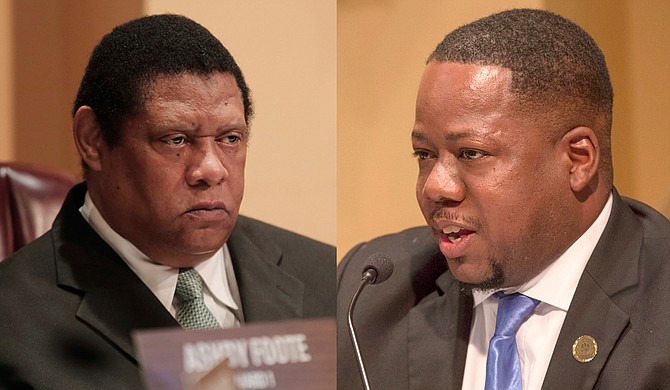 JACKSON — Less than a half hour after U.S. Sen. Cindy Hyde-Smith and her runoff opponent, Mike Espy, finished a closed-door debate, the Jackson City Council voted 4-1 for a symbolic showing of “no confidence” in Mississippi’s first woman in Congress.

This item, which Ward 3 Councilman Kenneth Stokes drafted, follows Hyde-Smith’s infamous “public hanging” quip and a second leaked video in which she laughed as she toyed with the idea of suppressing votes of “liberal folks” at some Mississippi colleges and universities.

“[H]anging is a serious issue. It’s no joke,” Stokes said. “It ain't something you sit up here and drink a beer about, ha ha ha. It’s not funny.” He added that he believes Hyde-Smith is not fit to serve as the sitting senator.

The document supporting this vote of no confidence goes the extra mile to contextualize Mississippi’s racist history of poll taxes, Jim Crow laws and the state flag that still bears the Confederate battle emblem in its canton. 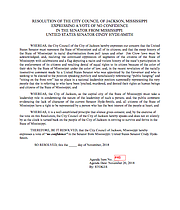 “The City of Jackson, as the capital city of the state of Mississippi, must take a leadership role in condemning the nature of the leadership of such a person and the public comment evidencing the lack of character of the current Senator Hyde-Smith,” the resolution reads. “And all citizens of the state of Mississippi have a right to be represented by a person who has the best interest of the people at heart.”

‘No Confidence,’ No Solidarity

Councilman Aaron Banks of Ward 6, who held a press conference on Nov. 13 to lambaste Hyde-Smith, said this act of solidarity would not be about partisanship but rather checking the senator on her recent comments, which he called “hateful, distasteful and very insensitive.”

"I would love to see every council person present and here to support this because any time anybody spews hate, spews racism or even quite frankly just jokes about it, it’s a nasty thing,” Banks said before the vote. "I think that we should all be present to send a message to say the capital city of the state of Mississippi doesn’t tolerate sitting senators joking or saying the things that they’ve said that comes off the way that they come off.”

Banks’ wishes did not come true, however. Councilman Ashby Foote of Ward 1 was the sole nay vote, and Ward 4 Councilman De’Keither Stamps and Councilwoman Virgi Lindsay of Ward 7 were not present at the meeting for the vote.

"I’m going to vote against this because I think that what concerns me is that the City (is) speaking as a city government alienating a U.S. senator, which is a resource we are so dependent upon to fix all the problems we‘ve got,” Foote said. “... I just don’t like the idea of alienating a senator that may be helpful in us getting funds down the road.”

Mayor Chokwe Antar Lumumba had previously tweeted his displeasure with Hyde-Smith’s "public hanging” comment and her “tone-deaf” justification for it. She released only one statement in which she categorized her comments as an “exaggerated expression of regard” and called any attempt to draw negative connotation from it “ridiculous.” At a press conference with Gov. Phil Bryant the day after the video made its rounds on the Internet, she refused to answer reporters’ questions and only deferred to her statement.

“I find it neither an exaggeration nor comical in a state that has the greatest and grandest history of lynching in this nation. It’s not exaggerated for me,” the mayor said at the council meeting.

He also offered support of this “no confidence” vote, although the mayor does not formally get a say in council matters.

“If we don’t even take it to the issue of race, I can’t think of a circumstance where a public hanging is OK,” the mayor said. "My lord and savior was killed in a public execution, and apparently, she would have been on the front row.”

"I understand the conditions of the city, and I understand what we need intimately so—I think about it every day and every night,” he began. "But there is no price that is worth the dignity and respect that our people need.”

“Councilman Foote, I want to say this, and I want you to hear me clearly,” he said. “If someone said something that was insensitive to you or your family or your children, I wouldn’t give a rat's butt how much money they had the opportunity to give me. Wrong is just wrong. If it was something that was insensitive to you, I respect you enough to not support it. I don’t care if they’re giving me the whole bank.”

Foote nodded, but he did not change his mind.

Several city representatives expressed how lynchings have personally affected them through the years, especially with several 21st-century lynchings in Mississippi.

The mayor recalled André Jones, 18, who was found hanging by his shoelaces in a shower stall at the Simpson County jail in 1992. Law enforcement stopped Jones in nearby Brandon, Miss., as he was driving his girlfriend home in a truck that police later said was stolen.

Within a matter of days of his arrest, Jones was set to start college at Alcorn State University. Instead, Jones spent the following day in a holding cell with other prisoners and later came up missing. A cellmate found him hanging in the corner of a shower stall. The FBI and state medical examiner ruled it a suicide.

The late Chokwe Lumumba, who represented Jones, said that the young man had probably been killed because his mother, Esther Quinn, led the Jackson chapter of the National Association for the Advancement of Colored people, and his stepfather was a minister with the Nation of Islam.

Mayor Lumumba also brought up Willie Jones Jr., a black man found hanging from a tree outside his white girlfriend’s home this February in Scott County. He had an on-again-off-again relationship with her, and she also mothered his child. Apparently, the two had an argument and went to her family’s home, not long before he was found hanging from a tree in that yard. His death was also ruled a suicide. Rukia Lumumba, a local attorney, activist and sister to the mayor, is representing the Jones family to seek justice.

Councilman Stokes made reference a lynching in Kokomo, Miss., in 2000, where Family members found Raynard Johnson, 17, hanging from a pecan tree yards away from their front door. Two autopsies led to a suicide ruling. This case was featured on the ID Network.

Councilman Charles Tillman of Ward 5, the senior member of the body, recalled growing up in rural Lincoln County and having his parents warn him when the Ku Klux Klan had been spotted down the road.

Then, Tillman brought it back to Hyde-Smith, whom he said should represent all of Mississippi without being selective. But he did not cast his vote of “no confidence” proudly.

"I hate to vote for it,” he said. “But when you put me in a position where I have to take a stand, I must take a stand. My heart won’t let me not do it. … I’ve had to take the back seats. I had to go out of the state of Mississippi to get an advanced degree—couldn’t get it in my own home state. It’s 2018, now. I want to see some better conditions before I leave this earth and Mississippi.”