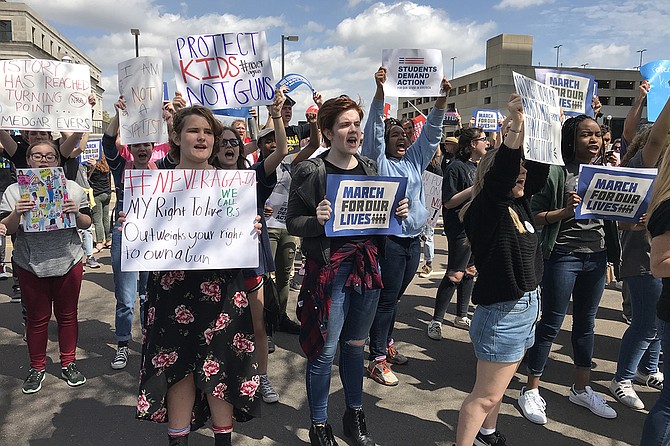 Nearly 200 students, parents and gun-legislation supporters gathered in downtown Jackson March 24, 2018, for Jackson's iteration of March for Our Lives. Photo by Ko Bragg

JACKSON — As the students of Marjory Stoneman Douglas High School take the world stage to demand stricter gun laws, many people in the Jackson metro area recall that 20 years ago, Rankin County had its own high-profile school shooting.

The gunman at Pearl High School was 16-year-old Luke Woodham. On Oct. 1, 1997, he woke up, stabbed his mother and drove her car to school wearing a trenchcoat concealing a .30-30-caliber rifle. He shot and killed two girls, one of whom was his ex-girlfriend. Seven others were hit in the crossfire.

Meanwhile, Assistant Principal Joel Myrick, who told The New York Times recently that he does not believe in arming teachers, ran to his truck to get the pistol he kept there unloaded. But he never fired at Woodham.

"I knew not to shoot because the backstop was not safe," he said. "I didn't just go blasting away," he told the Times in February.

At the sight of Myrick's gun, Woodham went back to his mother's car. While driving away, he lost control of the vehicle. Myrick caught up and held Woodham at gunpoint until the police arrived.

At the "March for Our Lives" protest in Jackson on March 24, this shooting came up in speeches, and the victims' names joined over 200 other names listed on a poster board commemorating those lost in shootings in Sandy Hook, Conn., Columbine High School in Colorado, Virginia Tech, the Pulse Nightclub in Florida, Las Vegas and others.

"In central Mississippi, nobody has to tell us that what happened at Parkland can happen anywhere because it happened less than 10 miles away from where we're standing right now in October of 1997," she said standing at a podium at the base of the Mississippi Supreme Court in downtown Jackson.

Abel was a junior in high school in 1997. This weekend, she was among about 200 Mississippians who showed up in support of the Parkland students' march for stricter gun laws taking place in 800 places throughout the world.

"Only in America is 'yet another mass shooting,' a phrase ... it's part of our vocabulary," Abel added.

Maggie Jefferis, a student at Murrah High School, brought up a threat that circulated on Facebook Feb. 20 saying a classmate was going to shoot up the school because he had enough of being bullied.

"We were lucky; our school shooter didn't exist," Jefferis said to the crowd. "He was a hoax, an ill-timed joke created for a laugh that instead caused mass panic."

The Jackson Public School District said the threat was not credible, but Jefferis offered images of her and her classmates sitting on the edge of their seats that next day, ready to jump at any moment. Still, she and other high-schoolers who spoke that day repeatedly stressed that they do not want their teachers to be armed.

"Putting guns in the hands of teachers simply creates a reality in which our first choice for dealing with any problem is to kill it," Jefferis said. "Feeling your life flash before your eyes the same way mine did when I read a Facebook post made about a kid that did not exist makes you realize that we don't have as much time as we think we do."

A mix of both adults and young folks made statements at Saturday's march, bringing about a clear shift—adults were realizing that they need to let youth lead the way toward gun reform in their schools.

Jefferis' mom, Tifani Keith, said her daughter came to her the night that the school-shooter threat circulated on Facebook. While she recalls being unnerved, she was reassured that her daughter and her classmates reported the post immediately. Keith believes that students should be the ones leading the change.

"We should absolutely listen to them—they are the ones facing this fear in the schools, this violence," Keith told the Jackson Free Press. "... We don't give them the credit that they deserve. We do not always treat them as the full human beings that they are."

Talamieka Brice began her remarks with a series of apologies: for turning away as school shootings happened, for accepting the lies congressmen told over the years, and for believing in the falsehood of empty thoughts and prayers. But, she also thanked the youth for reminding her that there is a generation behind her for whom she needs to fight.

"I've spent so much time pushing against the narrative of the adults, the baby boomers before me, that I lost sight of the generation behind me," Brice said to the crowd. "And the fact that I am now the adult, and your life is in my hands at the voting booth, at the dinner table, at the small places where bigotry and ignorance grows and entraps citizens around us. ... I am awake now."

Later, Brice talked to the Jackson Free Press about feeling powerless at times, especially with an older generation constantly impressing that things are never going to change. She had forgotten that in her youth, she had that same fire and passion.

"I just want to use my role as an adult, my voice as a mother and an artist and a business owner to be able to make things better for the next generation," Brice added.

The "March for Our Lives" took place while Mississippi lawmakers spent their Saturday in the Capitol to deliberate on budgets and bonds before the legislative session comes to a close. A sprinkling of them came out on the sunny, slightly overcast and windy day to observe what the teenagers had planned.

Sen. Sollie Norwood, D-Jackson, took photos with people there and showed his support for gun legislation that he lamented was not taking place among his fellow lawmakers, but also praised the young people for their efforts.

"I feel the passion of the youngsters that (are) engaged and involved. ... I think it's our responsibility to support them," Sen. Norwood told the Jackson Free Press.

Sen. Norwood added that he was especially not in favor of arming teachers because considering that minority students tend to be expelled and disciplined more often, he did not support giving license to use those weapons on children, he said.

"Teachers are human, too," he added

Although Sen. Norwood was frank that nothing will likely be done this late in the session, he hopes to include youth input for gun legislation next session.

"We need to hear from the young ones, we need to listen to them," Sen. Norwood said. "As adults we need to act. Coming back in next session, I look to propose some legislation that hopefully I can work with the young people to help draft over the summer that will provide more safety guidelines for them in the school and everywhere."