'I Call B.S.': 'March for Our Lives' in Jackson Puts Young Protesters on Display 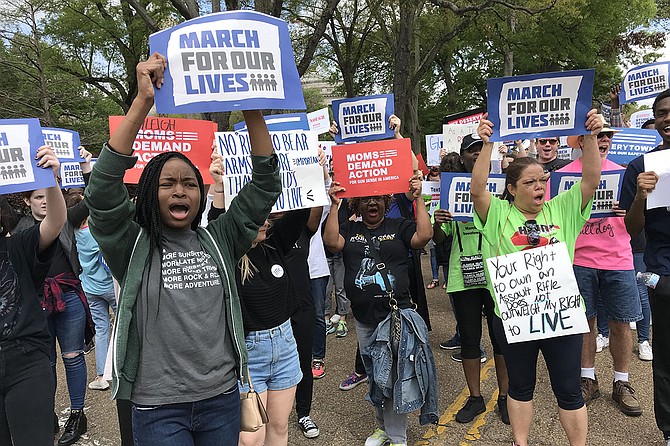 Nearly 200 people took to the streets of downtown Jackson on Saturday, March 24, 2018, for the March for Our Lives, which calls for school safety and stricter gun laws. Photo by Ko Bragg

JACKSON — Victoria Long, 15, a student at Madison Central High School, stepped up to the microphone and podium at the base of the stairs of the Supreme Court of Mississippi in ripped jeans and a black T-shirt. Her voice deepened and got louder as she got further into her speech that applauded the Parkland, Fla., students-turned-activists and criticized gun laws in Mississippi.

"For everyone who says it is not the guns, it is the people behind the trigger, I call B.S.," Long said Saturday at Jackson's version of the "March for Our Lives" rallies going on around the world. "An 18-year-old can legally buy a gun, but cannot legally buy alcohol: I call B.S."

Long said she understands the Second Amendment, but sees no need for civilians to have semi-automatic weapons. She also cried out for schools to become safe spaces again.

Outside the Mississippi Capitol, where legislators were holed up for a Saturday session to meet deadlines for bond and budget bills, 200 people from Jackson and the surrounding areas had marched through the streets where lawmakers parked their cars, screaming demands for stricter gun laws, before gathering at the Supreme Court to hear young people like Long speak.

"March for Our Lives" is movement the students of Marjory Stoneman Douglas High School in Parkland, Fla., began after a young gunman killed 17 people at their school during a six-minute rampage with an AR-15 he bought legally. This Saturday, more than 800 protests happened worldwide, drawing hundreds of thousands of protesters to the streets, many of them under age 18.

In 2015, Mississippi had the second-highest national rate of firearm deaths. Almost all the state's lawmakers in Washington, D.C., have received thousands of dollars from the National Rifle Association.

The Saturday march in Jackson provided a vignette of the new generation in Mississippi and their hope for change.

After leading the crowd from behind a seven-person wide banner with "March for Our Lives" etched across it, one of the march's coordinators, Hannah Davis, 17, approached the microphone.

"After the tragedy at Parkland I was deeply saddened, I was in complete shock. How could this happen again?" she asked the crowd.

Davis, a student at Brandon High School in Rankin County, named other tragedies around the nation like the Sandy Hook Elementary School shooting in 2012 and the mass shooting in Las Vegas last summer. After the march she told the Jackson Free Press that the students in Parkland inspired her to take action in this conservative southern area where not a lot of people support stronger gun regulations, she said. She does not believe in arming teachers or that this issue should be politicized.

Kids a decade younger looked on as teenagers like Long and Davis took a stand. Some of the elementary-aged kids who dotted the protests also joined the chants and held up signs of their own. A 6-year-old girl named Taleah held a sign that said "We Call B.S." Her 7-year-old cousin had a sign that said "PROTECT ME" in all caps. Taleah's mother, Lauren Long, 27, said she came out with her daughter, nieces and nephews because they're the ones in public schools. She also wanted to show them that people beyond their family care about their safety.

Long recalled the conversation she had with Taleah when the Parkland shooting happened.

"I kind of just (was) real blunt and honest with her," Long told the Jackson Free Press. "(I) want her to know that the likelihood of it happening in the United States is real high right now because of our policies, so I kind of just let her know that you listen to your teachers, if you hear anything, try to make sure you do everything that you can to protect yourself."

Long said it is stressful to have these kinds of conversations with a child so young, and she alluded to a sense of paranoia in not knowing when the next school shooting is going to happen—or where. In the meantime, she said she does not believe arming teachers would make her feel better about sending Taleah to school.

"It may sound cliché, but arms are for hugging," Long said. "I don't agree with our teachers being armed—that's not their responsibility. We need to look at other measures to maybe look at increasing our securities at schools."