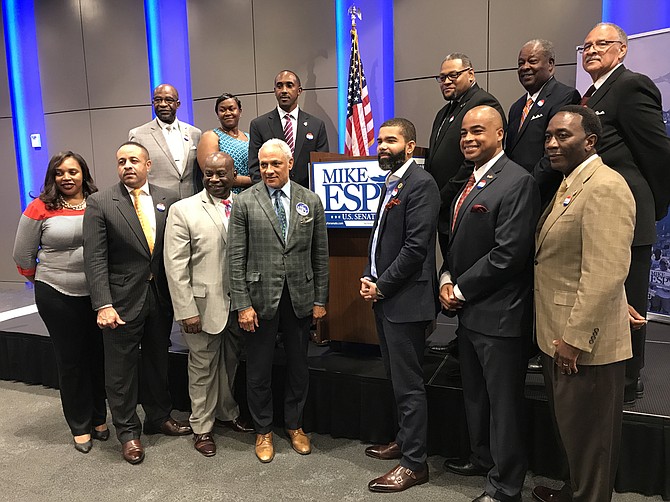 JACKSON — Nearly a dozen black mayors from cities and towns throughout Mississippi took the stage Thursday afternoon at the Mississippi Civil Rights Museum to endorse Mike Espy in his campaign for the U.S. Senate seat Thad Cochran vacated in March. Espy would make history as only the 11th African American U.S. senator in history and the first from Mississippi since Reconstruction.

Espy told the mayors that he believes they have the hardest political job in the United States, but it is also one, because of their proximity to the people, that yields an aggregate understanding of the problems Mississippi faces. He promised to stand with not only the mayors in attendance, but all mayors across the state.

"Whether you're white or black or whatever religion, whatever sexual orientation, I'm going to be there using whatever I can do within my spirit and the official stature of my office to help them to do better for their cities and better for all the citizens of Mississippi—and I hope I've proven that," Espy said.

"He's truly experienced, and one thing I do know is that he will be for everybody—not just cities, but small towns and rural towns as well," Wallace said.

Jackson's first black mayor, Harvey Johnson Jr., said that his support for Espy transcended race. Johnson offered remarks about how he'd seen representation in the state change, and could continue to should Espy win.

Johnson, who served three terms leading the capital city, said when he first started working with African American mayors in the state over 40 years ago, there were less than 10. Mayor Anthony Witherspoon of Magnolia, who also serves as president of the Mississippi Conference of Black Mayors, said he now represents more than 80 black mayors. Johnson told the room that the growth in black mayors "represents the symbol of political progress here in the State of Mississippi."

"We now have an opportunity to carry that symbol even further, to demonstrate to the world how far we've come here in Mississippi by electing Mike Espy to the U.S. Senate," Johnson said. "It's not about race, it's not about necessarily being the first black to be elected to the Senate since Reconstruction, because Mike Espy represents everyone. He has the energy, he has the intellect he has the integrity to serve Mississippians well."

Mayor Chokwe Antar Lumumba shared a personal anecdote from the 1990s when he met Espy, who later took the young Lumumba on a tour of the U.S. Capitol—a memory he finds to be representative of Espy's willingness to "go the extra mile."

Lumumba agreed with Johnson that the opportunity to elect Espy was not just about race.

"This election is beyond a question of mere color, it is a question of ideas," Lumumba said. "And we need representation in the United States Senate that represents the ideas that will move Mississippi forward."

"He stayed with the farmers, he brought my utilities back up to where they were," Henry said. "All my streets were paved, and we were in better shape than before the ice got there.... I know the man, and you have my vote."

Chuck Espy, current mayor of Clarksdale, Miss. is Mike's nephew and also a former member of the Mississippi House of Representatives. Chuck said his uncle would continue to represent the people because his uncle is not an "establishment candidate."

"You know, consistently, as Mike served as our U.S. congressman, he was very consistent in one angle: he was always about people...," Chuck Espy said. "He represented his people at all times. That's the type of man that you need to serve in Washington at this time."

Mike Espy will face off against incumbent U.S. Sen. Cindy Hyde-Smith and Mississippi Sen. Chris McDaniel in a special election on the same day as the national midterm elections on Nov. 6, 2018. Polls are open from 7 a.m. to 7 p.m. in Mississippi.