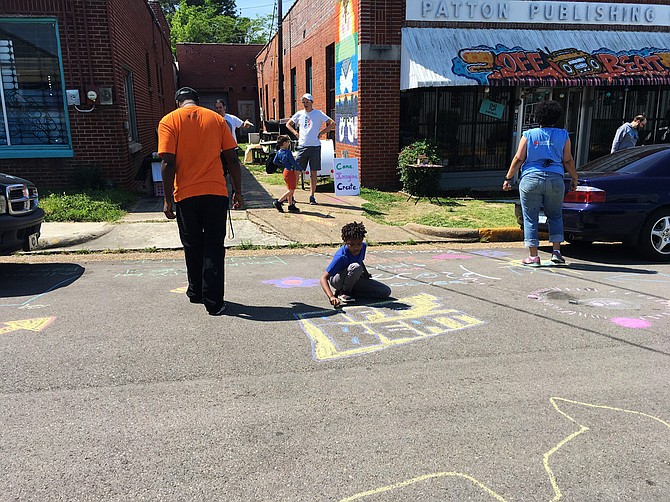 While parents shopped in Offbeat, some of their kids hung out with daniel johnson and Lesley Collins at Significant Saturday (a free art event at Offbeat every third Saturday). Photo by Amber Helsel.

Around 9:45 a.m. on Record Store Day, Saturday, April 21, a line of people stretched out into the street as they waited for Offbeat to open its doors at 10 a.m. Owner Phillip Rollins finally swung open the doors, and in poured the crowd of people—parents with kids, lawyers, DJs, musicians, teenagers.

While parents shopped in Offbeat, some of their kids hung out with daniel johnson and Lesley Collins at Significant Saturday (a free art event at Offbeat every third Saturday). They had tables set up—one for snacks; one with construction paper and cardstock, tempera-paint sticks, colored pencils and crayons scattered about; and the other covered with back issues of National Geographic magazines and one of Collins' favorite tools, a heavy-duty hole puncher that cuts out giant circles.

The activity for that particular day made sense considering it was also Record Store Day—they asked participants create album covers. The first 30 minutes or so was filled with that activity, but after a while, most people got out in the streets and sidewalk-chalked the strip of Wesley Avenue in front of Offbeat. It ended up being a community effort in its own right, complete with a giant moon, two competing Offbeat logos and a bunch of doodles.

A free community art activity. On the surface, it seems simple, but it goes deeper. A study from the Journal of the American Art Therapy Association shows that 45 minutes of visual art-making can lower stress levels in adults, and other studies show that for kids, creating art is often helpful in their development. The sad part is when funding gets tight in schools, the arts are often one of the first things to go.

In the grand scheme of life, we may often overlook ideas that seem too simplistic, but it's often the simplest of ideas that can have the biggest impact.

Take Kennedy Owens. (See page 3.) He has been reading for most of his life, so it was hard for him to hear that 28 percent of third-graders in Jackson Public Schools failed the Third Grade Reading Gate test in 2015. To fulfill his goal of becoming an Eagle Scout, he had to do a community service project, and his idea was fairly simple: put books in barbershops.

"In the black community, a barbershop is so strong. It's the place to be, and the place needs to do something helpful for the community," he told the JFP.

Since needing a haircut is a regular occurrence, he said that kids could use that 10 or 15 minutes while they sit in the chair to read. He collected about 800 books and put them in 10 barbershops around Jackson.

Reading increases a person's knowledge, expands vocabularies, improves memory and creates stronger analytical skills, and reading can also expand horizons because it exposes people to different lives and stories and cultures. Ten to 15 minutes may not seem like much time, but those few minutes could make a difference in a child's life.

Simple ideas have revolutionized our world and often became solutions to problems. For example, Johnson & Johnson created an ultra-durable tape during World War II to protect front-line soldiers' ammunition cases. When veterans came home from the war, they recommended it to heating- and air-conditioning contractors to hold ventilation ducts together.

Now, we know it as duct tape.

Samuel Fay created the paper clip when he needed to attach a claim ticket to fabric, but he didn't want to use a pin.   Alexander Fleming discovered the mold penicillium (where penicillin comes from) by accident.

Many of us either see or use these items every day, and without them, life might be harder (especially in penicillin's case). But we probably don't think about the impact they have on our lives, just like when it comes to simple ideas like a free art activity or giving a kid 10 to 15 minutes to read. Those are simple and maybe even small ideas, but it's important to remember that a giant oak tree grows from a small seed, and as Lao Tzu said, "The journey of a thousand miles begins with one step."

Think about it another way: One tiny seed (like say, a bamboo shoot that eventually takes over your yard) can lead to massive problems if not dealt with properly in the beginning. Issues like prejudice and racism begin with a tiny seed, but they can spread like wildfire if we don't properly address them. Luckily, it seems like the current generation of teenagers understands those issues, and they're working to fight them—often with simple ideas.

Owens' idea gets kids, specifically African American kids, to read, which in turn fights a decades-long inequity for black and poor students. Mississippi Youth Media Project students such as Kaitlyn Fowler, Kelsee Ford and Ruben Banks are finding and using their voices to tell stories and to fight injustices in Jackson, Mississippi and in the country. (See jxnpulse.com)

As a young person, it may be easy to feel invisible or like you don't have a valid voice. But Fowler believes otherwise.

"You have a voice. You just have to find it," she told the Jackson Free Press.

Fowler said that when was 4, her parents put her in taekwondo so she wouldn't get run over on the playground ("not on purpose, just because nobody knew I was there," she said) and to build her confidence.

As Fowler got older and began writing essays and talking to people, she realized that she had something to say and something she wanted to change. Her editorial on education-funding bill HB 957 this year went viral, through one small action of sitting down and writing about something she wanted to change. Had it not been for students raising their voices after the Marjory Stoneman Douglas High School shooting in February, the conversation on gun control probably would not have changed in the way it has.

Some people may believe that change has to come from the top down, but that's not always true. Real and last change often comes from the bottom up, and often from simple ideas.