Jackson’s Confederate-Named Schools May Change After JPS Board Vote 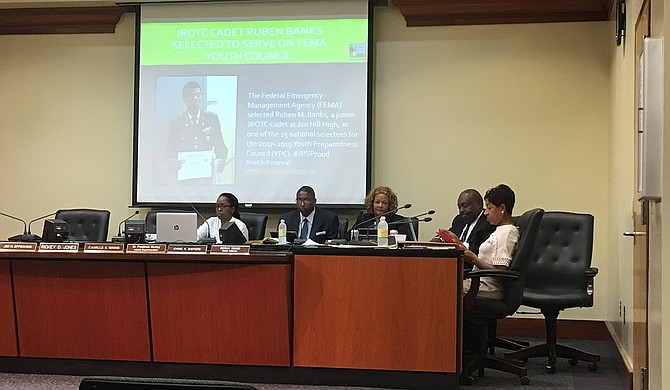 The Jackson Public Schools Board of Trustees met for its regular meeting on Sept. 19 and passed a motion to give local control to three elementary schools to change their Confederate-themed names. Photo by Arielle Dreher.

JACKSON — With the potential for a state takeover of the Jackson Public School District looming, its board of trustees voted to allow the local PTAs and community to rename three elementary schools in the district named for Confederate generals and leaders at its regularly scheduled meeting Tuesday night.

Board member Jed Oppenheim, who telephoned into the meeting, presented a motion toward the end of the meeting to hand off authority from the board to local PTAs, through processes they develop, to change the school names. Acting Board President Camille Simms asked to include the broader community in the motion to be part of the process as well.

The elementary schools should have new names in place by the 2018-2019 school year, Oppenheim's motion said. Initially, Oppenheim got some pushback, as Simms said he and board member Letitia Simmons-Johnson could work on a draft template in their committee.

Board attorney Dorian Turner questioned the motion because it seemed to conflict with existing JPS Board policy that says name changes require a unanimous vote from the school board.

“I wouldn’t tell you that it's illegal to do it, but I would tell you that it would be questionable, and if it were questioned later on, or quite frankly, if one of the names the local PTAs comes up with (is) something you wouldn’t have gone along with, you would have essentially given away your authority to question that (and) to not approve that,” Turner told the board. “And the question is whether or not you ought to be giving away that authority and discretion now.”

Turner also noted that the decision “would certainly be subject to the conservator coming in and (could possibly) undo it if that ends up being the case.”

Board members voted unanimously on the motion, handing off power to the three elementary schools, the community and their local PTAs to change their school names.

Oppenheim also introduced a motion to put a moratorium on out-of-school suspensions for students in Pre-K to third grade. That motion did not pass due to conflicting problems with the Student Code of Conduct, which would also need to be changed, and the administrative procedures in place to address student discipline.