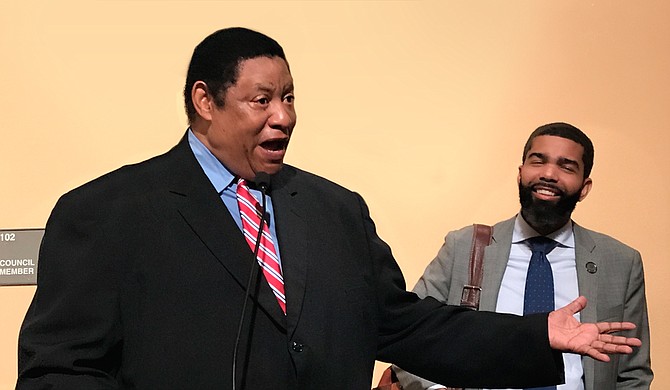 JACKSON — "Solutions" was the most common word heard on Wednesday night at a meeting of parents, students, police officers, and community leaders in City Hall to discuss strategies to reduce youth crime and violence in Jackson. A series of speakers, both invited and impromptu, spoke about their youth initiatives and hopes for giving the youth of Jackson productive outlets.

Ward 3 Councilman Kenneth Stokes called and hosted the gathering that turned into a free-wheeling mixture of crime testimonials and people talking about efforts to reach children, from JPD's Police Athletic League, to a dance troupe, to youth sports organizations. With heavy violent crime striking Jackson in recent weeks, some Jackson City Council members are going beyond policing in order to help lower crime by targeting what many say is the root: a lack of youth activities and entertainment in Jackson and a dearth of personal interaction at home, as well as the need for conflict resolution.

"How many capital cities have you been to that didn't have a movie theater?" Vince Gordon, the director of Young Life at New Horizon Church, asked the packed chamber. "When there's nothing like that for our young people, what do they do? They make up their own fun."

Mayor Chokwe Antar Lumumba came by the forum briefly after leaving the Mississippi Department of Education meeting over a potential emergency takeover of Jackson Public Schools.

"What y'all are doing today is an effort at being part of the solution," a weary Lumumba said, after joking that he is young enough to still carry his leather backpack. "We talk about issues like crime. We've been persistent to highlight the fact that crime is not a matter of policing. It's about how we engage our people ...."

Participants emphasized that minors who become engaged in criminal activity are victims of a lack of guidance and attention. Stokes' approach to youth crime prevention includes getting young people involved in the organizations and programs available in Jackson.

"If you live in the city like I do, you know what's on these streets. Those dope boys and those gangs," Stokes said. "Next thing you know, your child is in jail or dead." He added: "Jail is not good. That's why your children need to stay in school."

While many spoke of lack of funding and resources in solution-oriented efforts to keep youth occupied after school, Jimmy Bell, professor of criminal justice and sociology at Jackson State University, assured the audience that there is no such thing as "solutions" to crime, despite the call-to-action by his former student, Councilman Stokes.

"If you're waiting around for solutions, there aren't any," Bell said from behind the raised chamber table at the front of the room where council members usually sit. He didn't take the podium because he has trouble standing for long periods of time.

He said frankly that no one would offer flat-out and foolproof solutions for preventing violence in Jackson. "I can't give you solutions, but I can give you structure," Bell said.

Bell laid out his work in developing transformative models for the city of Boston's relationship between crime and community policing. Bell believes local academics like himself who study crime and sociology should be consulted when things go awry just as they are in cities like Boston and Cincinnati. He also revealed plans to work with Stokes to develop a workable model for crime prevention in Ward 3, which sees high crime. Bell promised that his strategy would include an evaluation model for determining if it works.

The professor also praised Stokes for his controversial criticism of regional police chases that endanger people's lives, often over relatively minor crimes. The research on police chases shows that the Ward 3 councilman was "right," Bell said.

In particular, Stokes criticized suburban police forces for chasing suspects into the Jackson city limits, which resulted in a death in west Jackson last year.

"People disrespect this city for some reason," Bell said.