Stokes to Circulate Police-chase Petition in Response to DOJ Letter 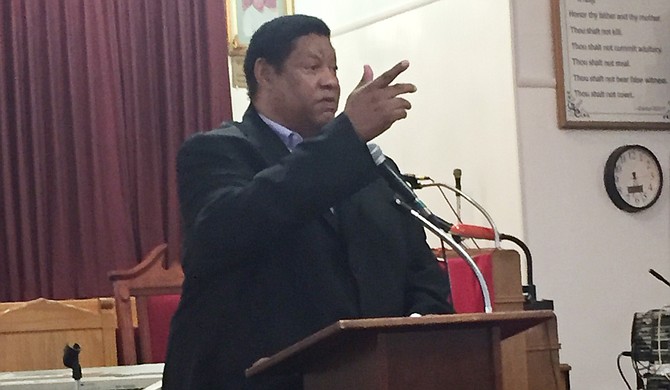 Ward 3 Councilman Kenneth Stokes met with members of the community at Cornerstone Baptist Church Wednesday night to discuss their response to the Department of Justice letter about high-speed chases for outside jurisdictions into Jackson. Photo by Tim Summers Jr..

JACKSON — During a community meeting at Cornerstone Baptist Church Wednesday night, Ward 3 Councilman Kenneth Stokes and citizens decided to circulate a petition in response to a letter from the U.S. Department of Justice's Civil Rights Division about suburban police departments' high-speed chases into the city.

"We hope that we can get something done, so we will start the petition," Stokes said at the end of the meeting.

The response from the DOJ included a request for more information on the matter from the community, and Stokes said he wanted the meeting and others in the future to decide as a city how to deal with the danger the police chases pose.

"You know, nobody has all the answers," Stokes said. "I don't care who you are, you aren't going to know everything. Only God knows everything. But from these meetings, you can come up with some solutions. And one solution we heard today was a petition drive."

Many residents fear that the next police chase will cost another life, justifiably so as Jackson has suffered several deaths, including that of Lonnie Blue Jr. on March 21, who was sitting at a red light in west Jackson as Clinton police chased a shoplifting suspect through the area.

"That's one of the reasons that we are out here tonight, ladies and gentlemen, to have a record of how you feel about these high-speed chases," Stokes told the small crowd assembled. "We don't want to wait until you are hurt, until someone you love is hurt or killed. We have the Justice Department's attention. We need to go all over the city with these types of meetings. So that people can express their concerns."

Stokes said lawsuits, although they provide recompense for pain and suffering, are not enough.

"Even though these families have lawyers, and these lawyers file lawsuits, that will not bring these family members back that are dead," Stokes said. "And that's what we want to do: We want to stop this madness before someone is killed."

Dorothy Davis, president of an association of seven Farish Street historic churches, said that those organizations supported Stokes' efforts to bring attention to the chases. "We are here to let Mr. Stokes know that we are backing him 100 percent," Davis said. "These chases, they have been asked by the chief of police, that's the head of the department, to stop chasing into Jackson."

Davis said that it was clear to some of those in the public that the police in surrounding municipalities are not heeding calls from Jackson leaders, including Jackson Police Chief Lee Vance. "We see that they are not listening to him at all. They don't care," Davis said. "All they care about is getting their man, because they say that Jackson is the hiding place."

Davis said, like others, that the lives of her loved ones concerned her the most. "I couldn't bring them back if a high-speed chase got in, and they got hurt," Davis said. Citizens should use all of the tools available to them, she said, including social media and attendance at public meetings, to draw attention to the high-speed chases in the city.

Stokes, who has in the past received criticism publicly for stating that citizens should throw objects at outside police, was quick to nip that sort of discussion in the bud. "I don't want everybody to get the wrong the idea." Stokes said after Davis finished. "She didn't say that. She has a son that is a law enforcement officer, a deputy sheriff."

Jeraldine Watts, a former teacher, spoke on using peaceful methods to address the dangers of high-speed chases. She saw a patrol car come around onto Enoch Street from Sullens Avenue. "And he was going almost on two wheels, hitting that curb and then, a few seconds later there was another one going as fast as he could go."

She did not indicate to which local authority the patrol vehicles belonged.

"And I almost had a panic attack, because the children could have been in the street playing," Watts said. "That's serious. Somebody could have gotten killed. And we can do something about it. We can get behind Councilman Stokes. And one thing I thought about,is we can get a petition."

"We want to do it legally if we can. We don't want to see anybody else get hurt," Watts said. "Let's do it legally."

Below is a complete copy of the text of the letter:

This responds to your letter to the Attorney General dated February 3, 2016, describing recent occurrences of several high speed chases by outside law enforcement agencies into the City of Jackson. You describe one of the more recent chases on January 31, 2016, by two outside agencies whose chase of a suspect into Jackson caused a crash involving several innocent civilians, including children. Although you have directed continuous efforts to stop this practice of high speed chases by outside jurisdictions, they have continued unabated. You are concerned about the risk these high speed chases pose to public safety within the City of Jackson, and you request a civil rights investigation into this practice by outside law enforcement.

The Civil Rights Division's Special Litigation Section is responsible for enforcing federal civil rights laws aimed at eliminating patterns or practices of misconduct by state and local law enforcement officers. The Violent Crime Control and Law Enforcement Act of 1994, 42 U.S.C. § 14141, together with the anti-discrimination provisions of the Omnibus Crime Control and Safe Streets Act of 1968, 42 U.S.C. §3789d, and Title VI of the Civil Rights Act of 1964, 42 U.S.C. § 2000d, authorize the Department of Justice to investigate systemic violations of the Constitution or laws of the United States by local law enforcement. Where an investigation reveals a pattern or practice of police misconduct, the Section may initiate a civil action in the name of the United States against state and local officials and seek appropriate relief. This relief often includes mandated improvements in a law enforcement agency's policies, procedures, training, and supervision, or technical assistance in this regard. Over the years, our enforcement of these statutes and our collaborative work with law enforcement agencies and communities across the country has led to improved community policing practices that strengthen public trust, promote integrity and accountability, and reduce crime.

We appreciate your commitment to obtaining an independent assessment of high speed police chases through Jackson, Mississippi, to ensure that the civil rights of the people in Jackson are protected. We will carefully consider your request for an investigation and will contact you if we need additional information. If you or your constituents wish to provide additional information concerning these allegations, you may contract the Special Litigation Section as follows:

We hope this information is helpful. Please do not hesitiate to contact this office if we may provide additional assistance regarding this or any other matter.