Keeping Kids Off the Streets 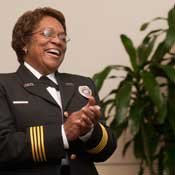 Jackson Police Chief Rebecca Coleman says that a proposed curfew for teens is problematic because law enforcement officials have no place to house violators.

Jackson Mayor Harvey Johnson Jr. and the Jackson City Council are advocating for a facility in the city to house minors who are not serious offenders as a solution to curbing teen violence this week.

Ward 3 Councilman Kenneth Stokes reintroduced an expired 2007 curfew ordinance for minors and an ordinance to keep minors out of nightclubs and bars. The proposal comes more than a week after four teens were shot outside The Main Event Sports Bar on U.S. Highway 80. But a curfew for teens is problematic because law enforcement officials have no place to house the teens, Jackson Police Department Chief Rebecca Coleman said July 25.

"The proposal of this ordinance is only going to remedy people's excitement right now instead of being a real solution to the problem," Ward 6 Councilman Tony Yarber said about the curfew ordinance Monday at the council's work session.

In August 2010, Stokes and other council members championed a similar ordinance to restrict anyone under 18 from being on a public street, highway, park, vacant lot, establishment or other public place between the hours of 10 p.m. and 6 a.m. weekdays, and midnight to 6 a.m. Saturday and Sunday. Coleman maintained the same position she had last year and told council members that JPD is responsible for housing status offenders.

Status offenders are minors who are guilty of violating curfew, but have no other criminal charges filed against them. Prior to 2009, police stationed the offending youth at the Henley-Young Juvenile Detention Center, but that is no longer possible. State law prevents status offenders from being placed in the same facility as criminal offenders.

Setting curfews for teens is a heavily debated issue and may not decrease youth crime. Researchers Mike Males and Dan McAllister claim that there is no data to prove that curfew laws are effective ways to prevent youth crime. The National Youth Rights Association also opposes teen curfews.

"My concern is that people think we aren't doing anything, and (teens) are getting killed while they are out at 3 a.m.," Bluntson said. "What we are saying is we don't have a place to put them, so we'd rather put them in the ground."

Yarber said he had attempted to use a church as an option for housing the offenders, but state law prevents third parties
from interfering.

The city allocates $1.2 million annually to the Henley-Young Detention Center, and Johnson said that money could possibly be used for opening a satellite location for the detention center to house status offenders.

"We provide $1.2 million for the operation of Henley, and we are supposed to be in the process of renegotiation," Johnson said.

"I've always viewed that as a temporary agreement but there are questions about how the renewal is crafted. I'd like to see us maybe take that $1.2 million and have a facility to house status offenders. But it would require the cooperation of Hinds County."

Mississippi Youth Justice Project Staff Attorney Corrie Cockrell said her organization has been working with a committee to address the curfew issue, but couldn't discuss specific details about a location to house status offenders.

"Our big thing is that it would have to be a non-secure facility," Cockrell said. "That's the problem with Henley-Young. That's a secure detention facility. Children who are picked up for violating the curfew would not fall into the category of children who would require secure detention. That's the sticking point. I'm interested in seeing what the city is proposing to do."